Start of the 2/25/61 race and going into turn 6 Dave MacDonald has his '57 Corvette running 5th in the B-C-D Production race. Race leader
Peter Calkin is just ahead in his Mercedez 300SL. Photo Treichler

MacDonald would take the lead on lap 4 and go on to score the victory. Corvette star Tony Settember finished 2nd with Peter Culkin 3rd
in a Mercedes 300SL. Jay Hills in a Porsche 356 was 4th and Ronnie Bucknum in an AC Bristal 5th. Photo from the MacDonald family 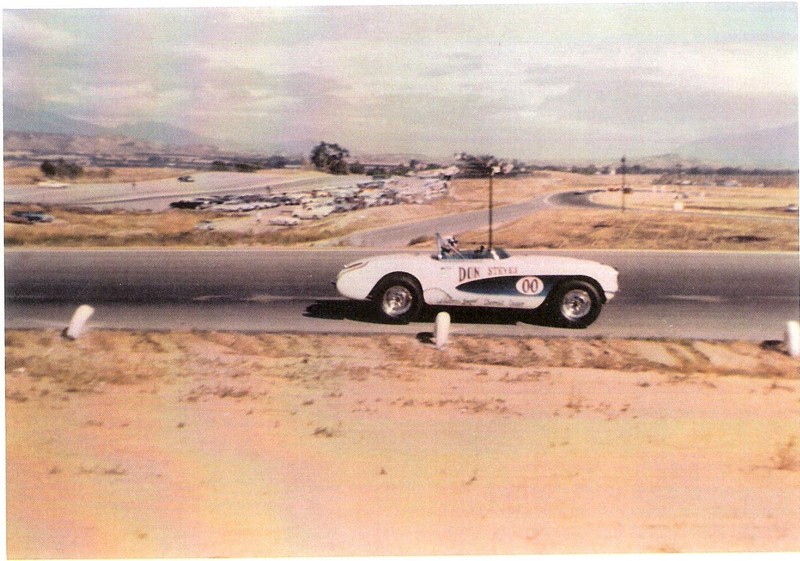 Dave MacDonald would also run his stock Corvette in Sunday afternoon's Modified race. Dave was a dnf after his fuel pump gave out.
Before retiring though he had set a Riverside lap record at 2:17 seconds! Outstanding.

Race officials would categorize Dave's Vette in the A-Production class so whatever points Dave would gain in the race would not go
towards his B-Production lead.

Dave MacDonald also brought his newly finished Corvette Special to the weekend event and you can see in the program that the car was
entered into the LA Times Grand Prix on Sunday 10/15/61. The car was fresh out of the Max Balchowsky's garage and had had only one
shakedown - which did not go well. The car needed far more development and was scratched from the Grand Prix. Courtesy of Riverside
International Automotive Museum

Cars fill the grid - Dave MacDonald pulls his Corvette into the pole postion after scoring fastest qualifier. Bob Dickson in another Corvette
sits in the middle of row 1 while Billy Krause's Jaguar rounds out the front row.

Drivers wait for the flag to drop to begin the 3hr enduro. Photo Dave Friedman

MacDonald guns his Corvette and is in good shape coming off the line but Billy Krause's Jag (just out of view) is out first.

Billy Krause grabs the hole shot and glances over at rival Dave MacDonald driving his new '62 Corvette. Joe Freitas (#120) is in the 1961
Vette he purchased from Dave, gets off to a shakey start. Photo Dave Friedman

Billy Krause's lead didn't last long as Dave MacDonald took control by the end of the first lap and went on to score yet another Riverside
victory in one of his #00 blue & white Corvettes. Photo Dave Friedman from the book California Screamin

Dave MacDonald blasting through the Riverside course and running away from the field. Photo Dave Friedman

Final lap of the race and Dave MacDonald goes through turn 6 and heads for the checker.

A happy Dave MacDonald in the winners circle after a victorious run in the 1961 Riverside 3hr Enduro. Photo Dave Friedman 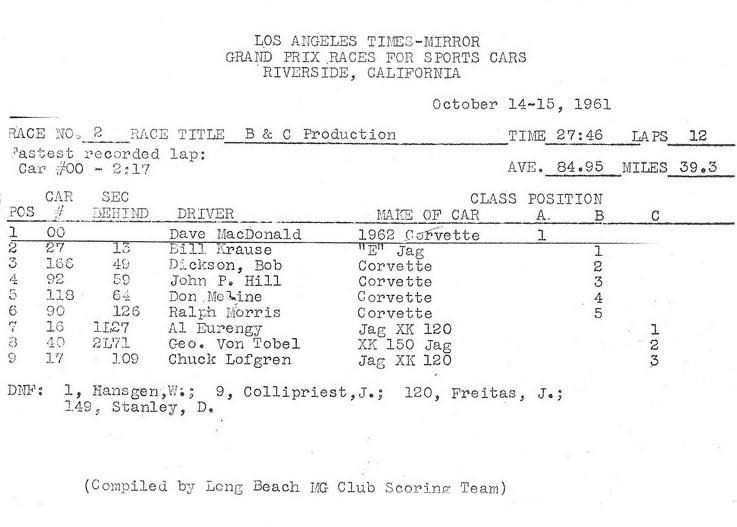 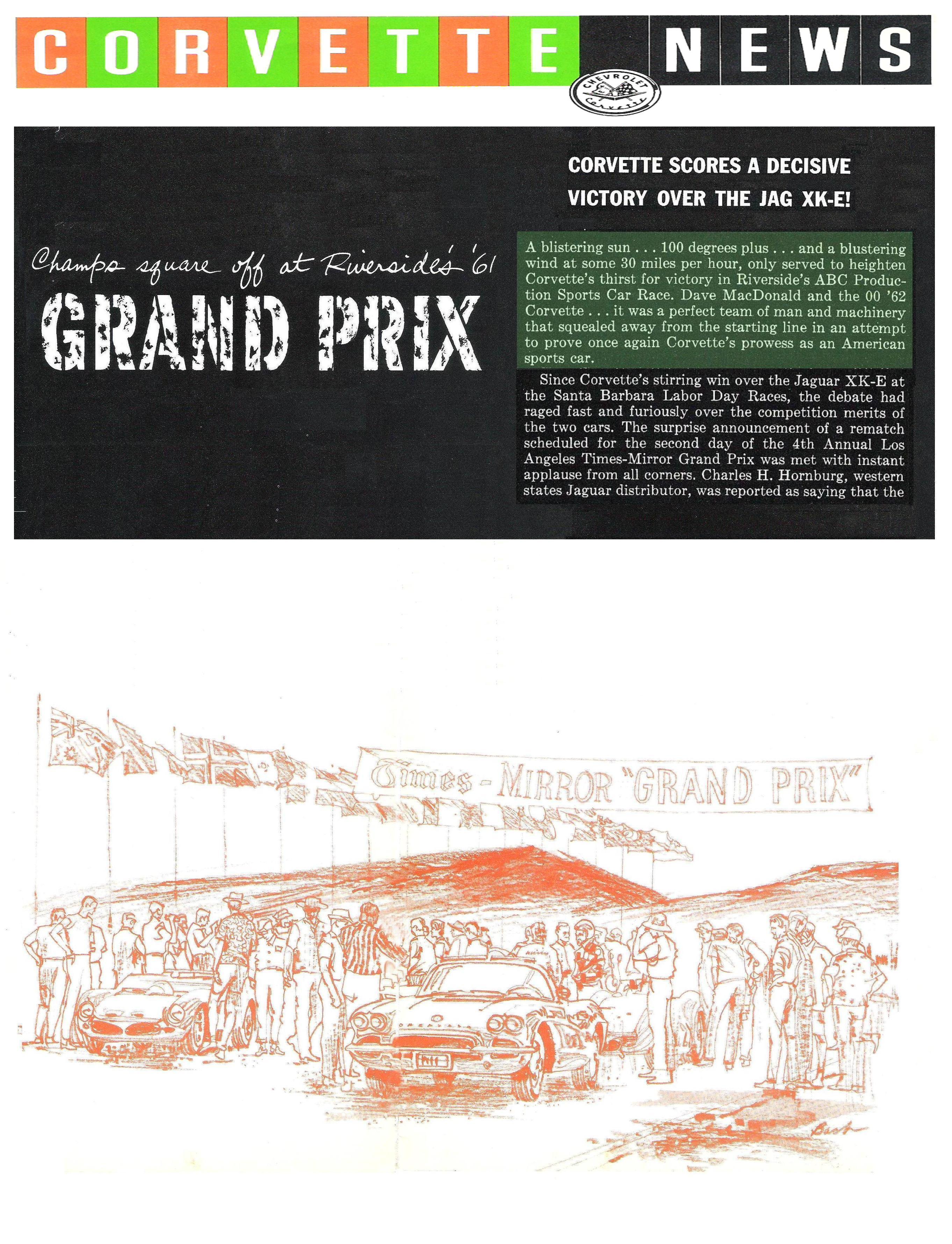 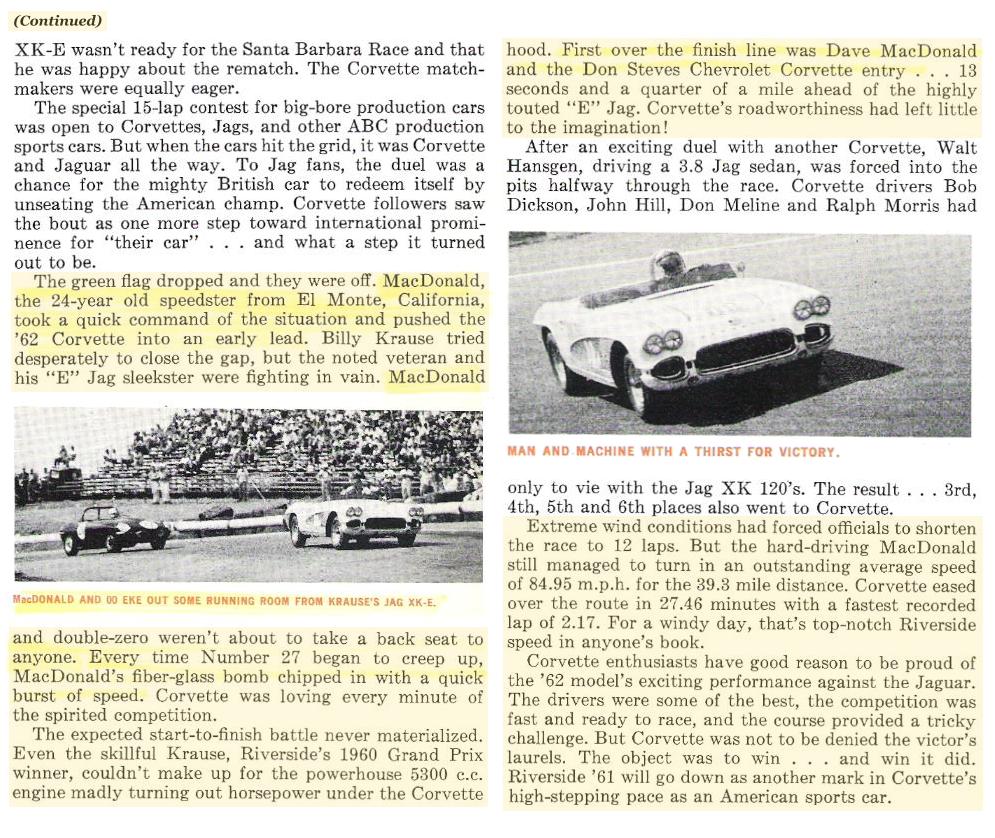 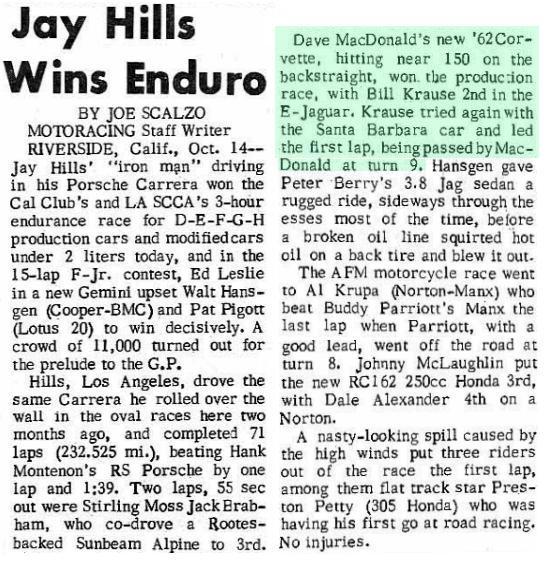 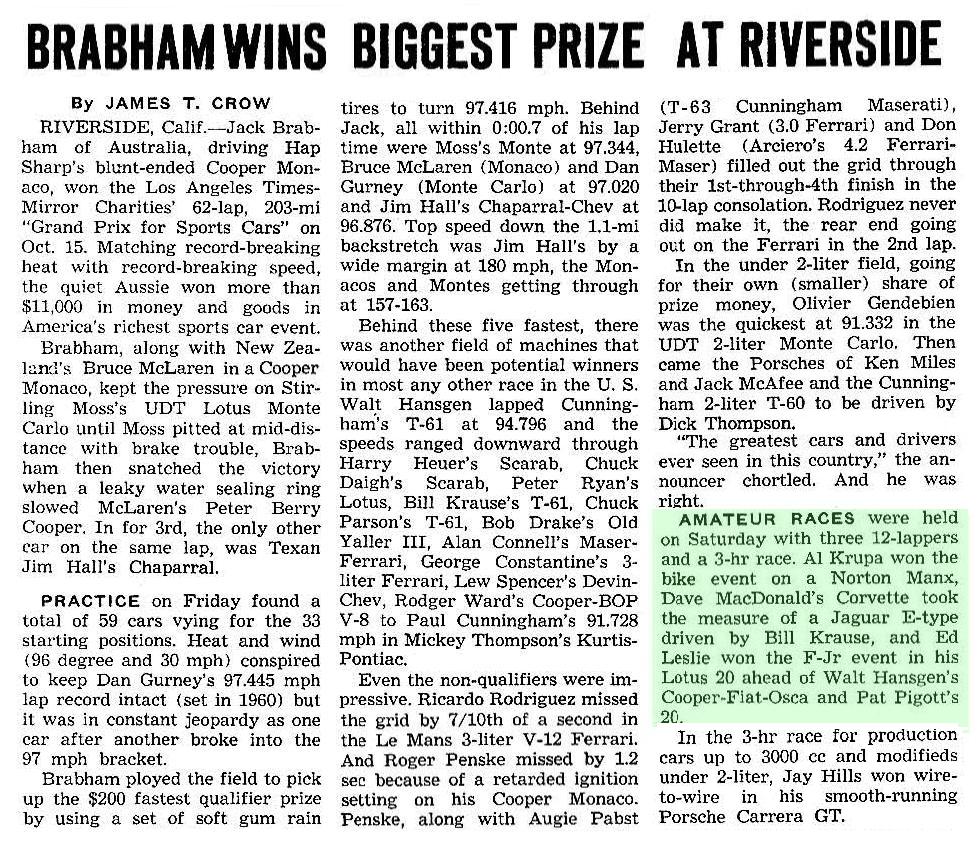 This win at Riverside on 10/14/61 Riverside unfortunately did not count towards the B-Production class standings. Riverside race officials
classified Dave's new '62 Vette in the A-Production class so no points were added to Dave's lead in the B class. (Dave would drive his new
Corvette Special in the Modified class for the rest of the '61 season, but despite that, had still racked up enough points to hold on and win
the 1961 B-Production Championship). 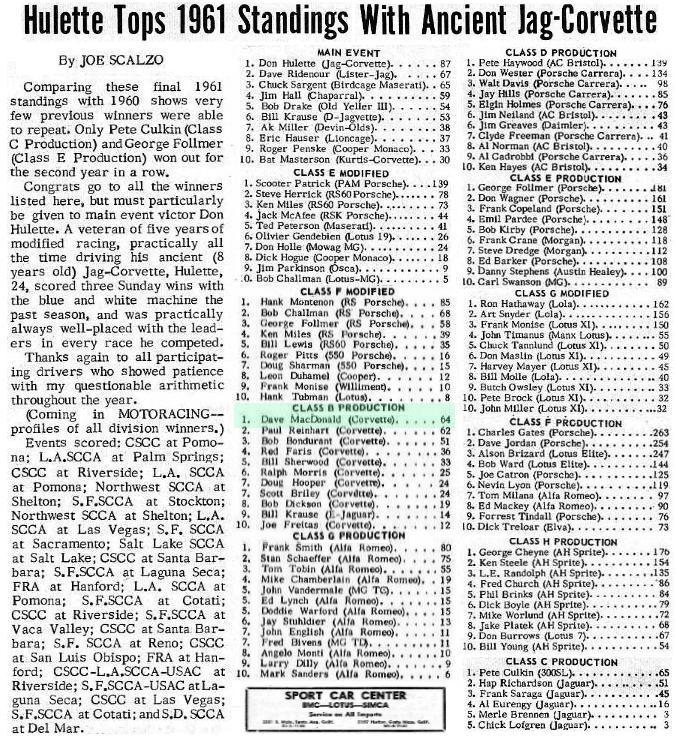