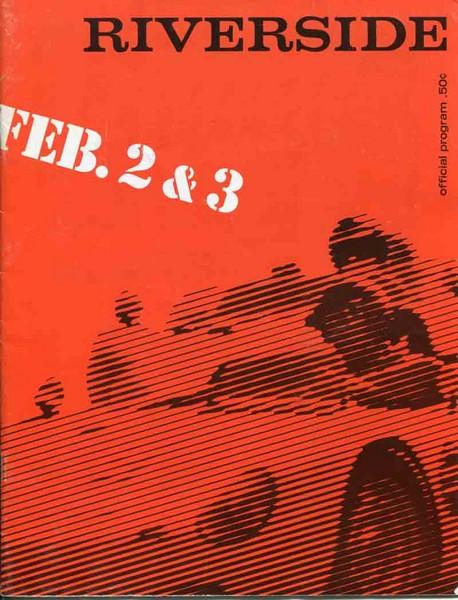 Carroll Shelby had raided the Chevrolet camp to hire away Dave MacDonald to be his #1 driver. Dave's first race will be here at Riverside 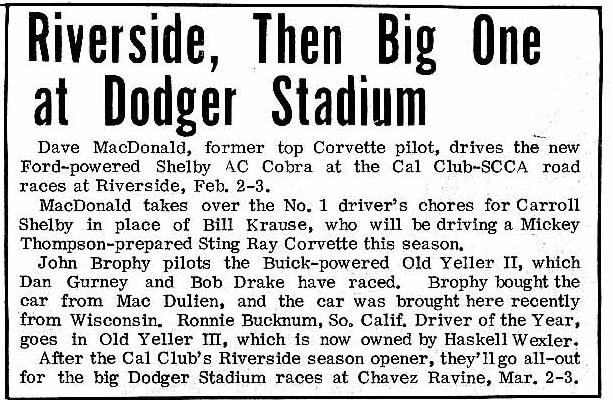 This SCCA sanctioned event was run on Riverside Raceway's 2.5 mile short course layout. This photo is from Oct 1963 but you can see the
long course used to run NASCAR events. The big stockers were directed out of turn 6 and into a short chute over to turn 8 (top of this photo).
and then to an elongated back straight. This change added a tenth mile to the overall length of the course

Shelby American arrives at Riverside on Thursday to get some practice time in. Dave relaxes against the Roadster while Carroll entertains
the kids. Photo Dave Friedman 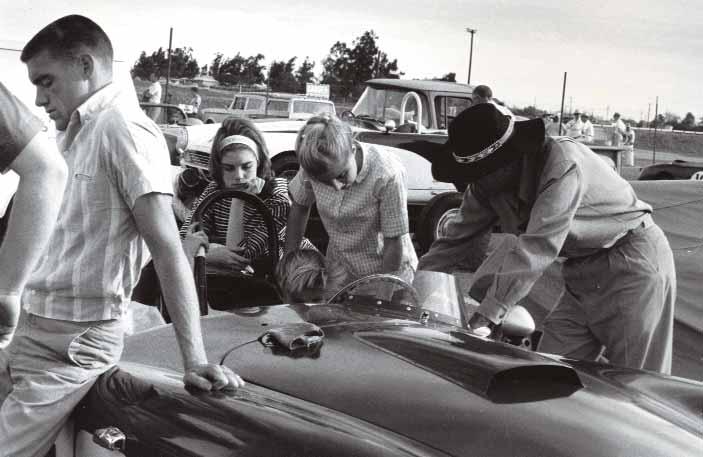 Friday morning a mix of classes hit the track for practice. Amazing Dave Friedman photo shows Dave MacDonald in the #98 Cobra, Red
Faris in a Stingray, Jay Hills in a Porsche 356, Bill Sherwood in a Stingray, Ronnie Bucknum (#31) in Ol' Yaller MK III, Ken Miles (50) in
a Porsche 718, Dick Guldstrand (56) in a Stingray, Don Meline (118) in a Vette & Max Norris (63) in an Austin Healy. (Miles ran this Otto
Zipper owned Porsche in Sunday's modified race and finished 2nd). 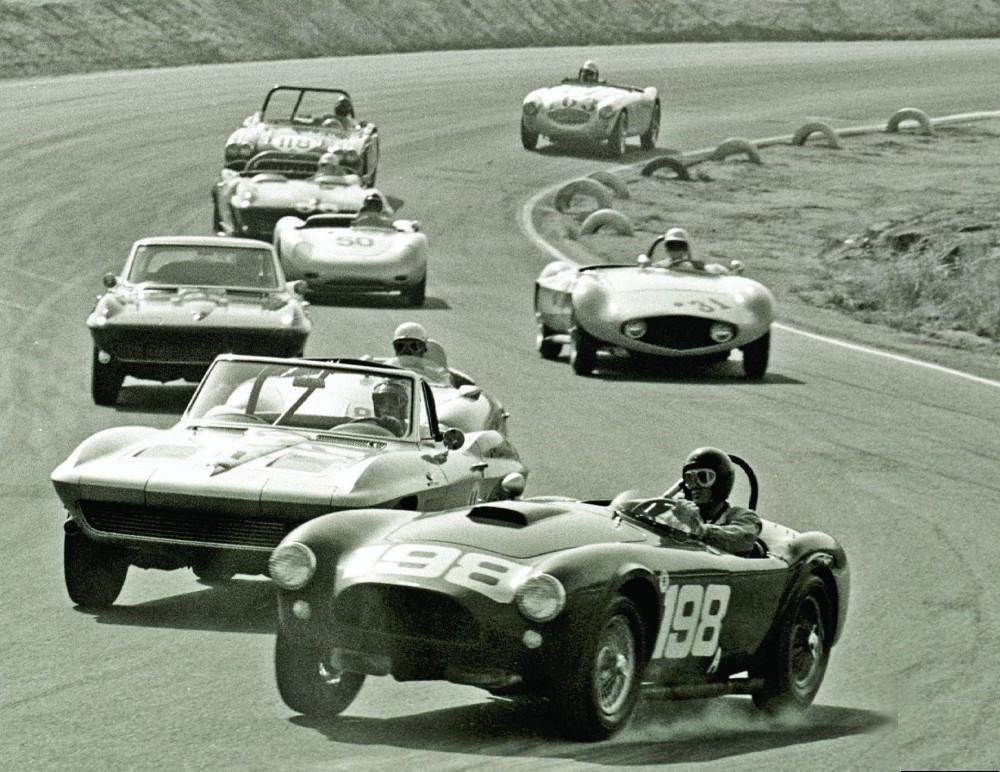 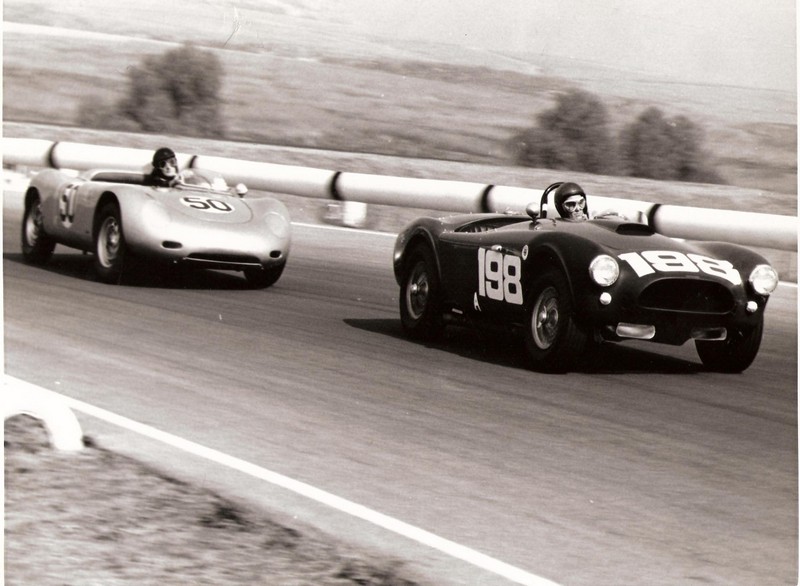 With practice over and the course being cleaned, Dave & the crew relax a bit before the A-B-C Production race begins. Photo Peter Luongo

Race time! Saturday Feb 2 race and Dave MacDonald & Ken Miles go thumbs up on the starting grid. This is first race in a Cobra for
MacDonald and Miles. Dave in CSX2026 and Ken in CSX2002. Photo Chad Struer and Sportscarscan.com

Photo of field coming out of turn 1 with Miles, Reinhart and MacDonald 1-2-3 and Corvettes of Faris & Bondurant 4th and 5th. Photo
courtesy of Road & Track magazine 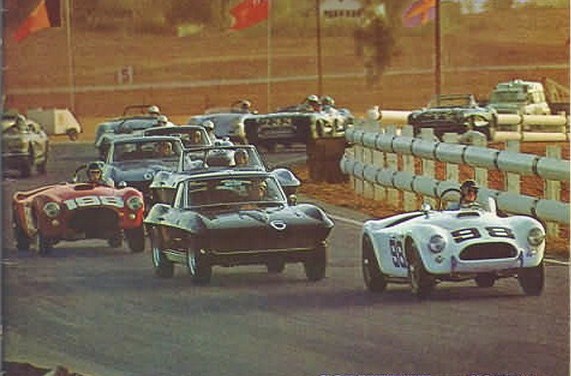 Coming back into turn 6 on lap 2 it's now Miles & MacDonald 1-2. Photo Friedman

Lap 4 it's still Miles and MacDonald 1-2 coming out of 6, but Dave is preparing his move. Photo Dave Friedman 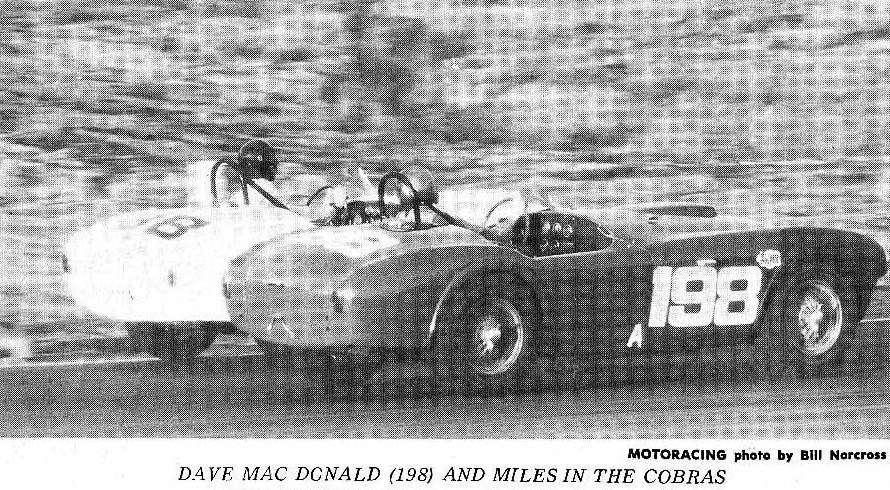 Dave MacDonald passed Ken Miles going through turn 8 and was race leader down the back straight. Photo Dave Friedman

Bob Bondurant and Dick Guldstrand have moved their Corvettes to 2nd & 3rd and chase the leaders. Photo Dave Friedman.

Right behind them and running 4-5 are Corvettes of Red Faris (#11) and Don Meline. Photo Dave Friedman

In the end Dave MacDonald was too strong and brought Shelby Cobra CSX2026 home for the victory. Teammate Ken Miles finished
2nd for a 1-2 Cobra sweep. Photo Dave Friedman Sunday Feb 3 main event gets underway and this time Dave MacDonald gets the hole shot and leads teammate Ken Miles through turn 1. MacDonald and Miles separate from the field a bit and as they head into turn 8 they still run 1-2. Miles however comes in hot and begins
to lose it, going off track and into the rough dirt. He does a remarkable job of staying with it and reenters the course - with door wide open
- without losing track position to the Corvettes. The following is a frame grab sequence taken from video of the mishap. Ken begins to slip out from behind Dave's Cobra and slide toward the dirt Ken's front wheels hit the dirt and his Cobra jerks left toward the hill. But this is no ordinary race car driver of course and Ken regains control before impacting the hill and steers back toward the track. Ken Miles puts his Cobra back on the track with one hand while closing the driver's door with the other! Ken Miles would go down and round turn 9 and pull his Cobra into the pits to check for possible damage from the off road excursion. The
crew told Ken the car was fine and he re-entered the race to start lap 2 in last place, 34 seconds behind the leader MacDonald. Dave MacDonald has CSX2026 all alone and in front now as he pulls away from the field.

Ken Miles now blowing by Corvettes as he moves his Cobra back through the ranks, Here he passes Bill Sherwood. Photo Dave Friedman

Dave MacDonald powering through the Riverside course on lap 6 is now comfortably ahead of the field. Photo Dave Friedman. 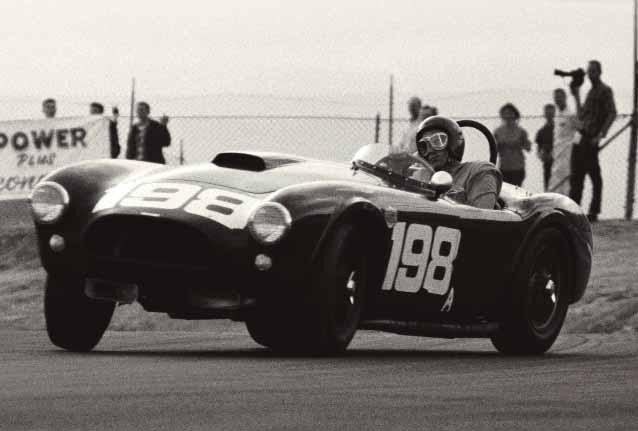 Bill Sherwood has his Corvette Stingray running 7th as he goes through turn 6. Photo Dave Friedman

Dick Guldstrand catches Paul Reinhart out of turn 6 and prepares to pass him and take over 3rd place. Photo Dave Friedman

6 laps to go and Miles all out still trying to catch Dave MacDonald ... he's closing the gap. Photo Dave Friedman

MacDonald is still race leader with 4 laps remaining but his lead is only 15 seconds over hard charging Miles. Photo Dave Friedman

3 laps to go and Dave MacDonald slings his Cobra past Danny Stevens and puts him two laps back. Photo Dave Friedman

MacDonald with pedal to the metal trying to stay ahead of Miles. Photo Dave Friedman

Miles desperately trying to catch MacDonald ... but there's precious little time to do it. 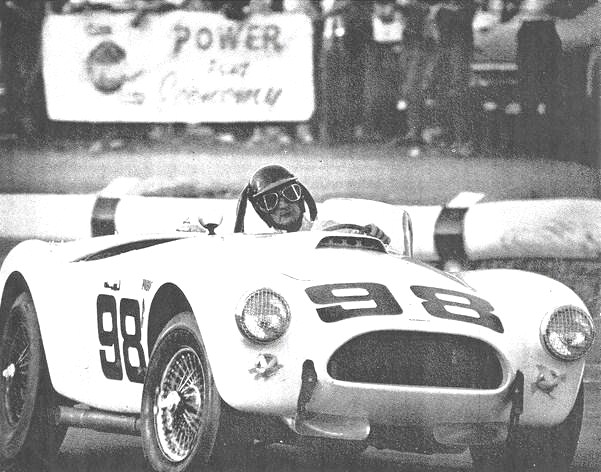 Final lap and MacDonald not backing off as the skinny treads on his Cobra hang on for all they're worth. Photo Dave Friedman

MacDonald blows through turn 6 with a half lap to victory. Photo Dave Friedman 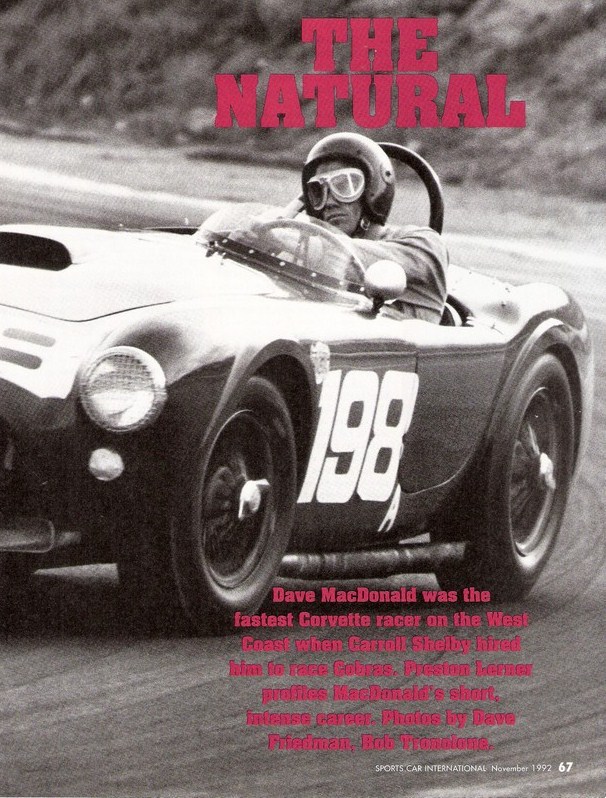 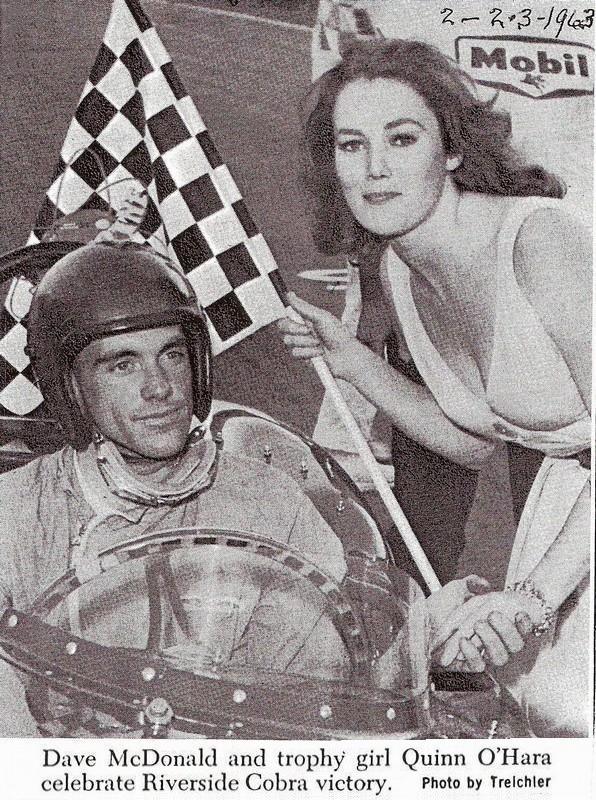 Dave drove the Cobra 260ci twice that weekend and won both races at the SCCA sanctioned event. Photo Dave Friedman from the book
'Carroll Shelby - The Shelby American Original Archives 1962-1965' 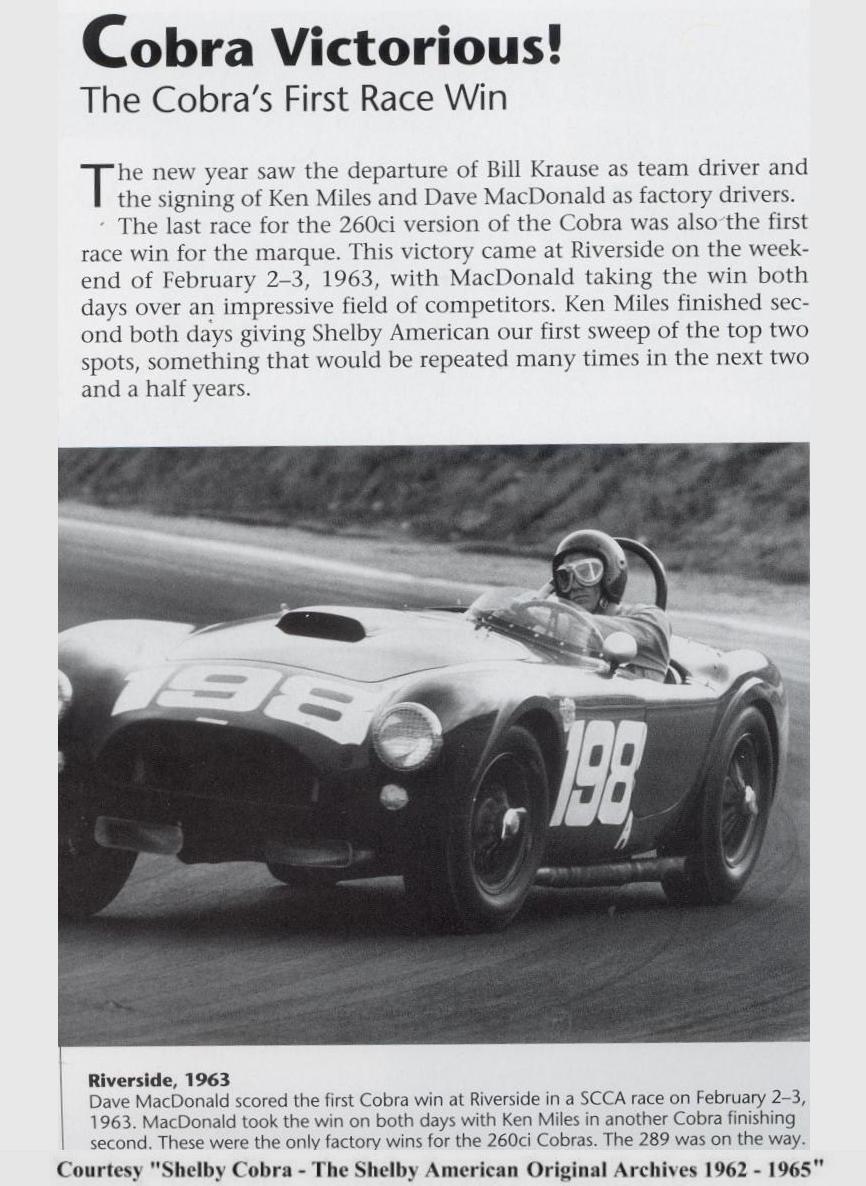 Road & Track Magazine captured this historic Cobra Corvette tilt on the cover of their June 1963 issue. 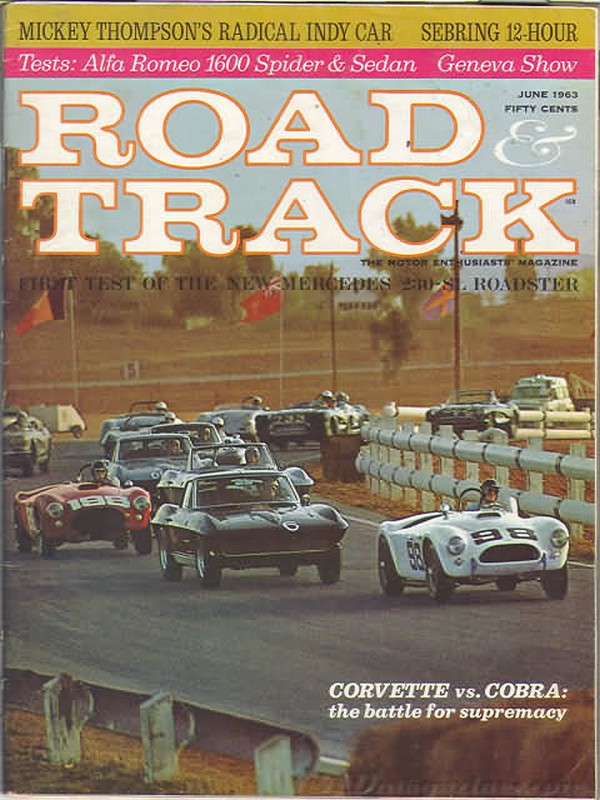 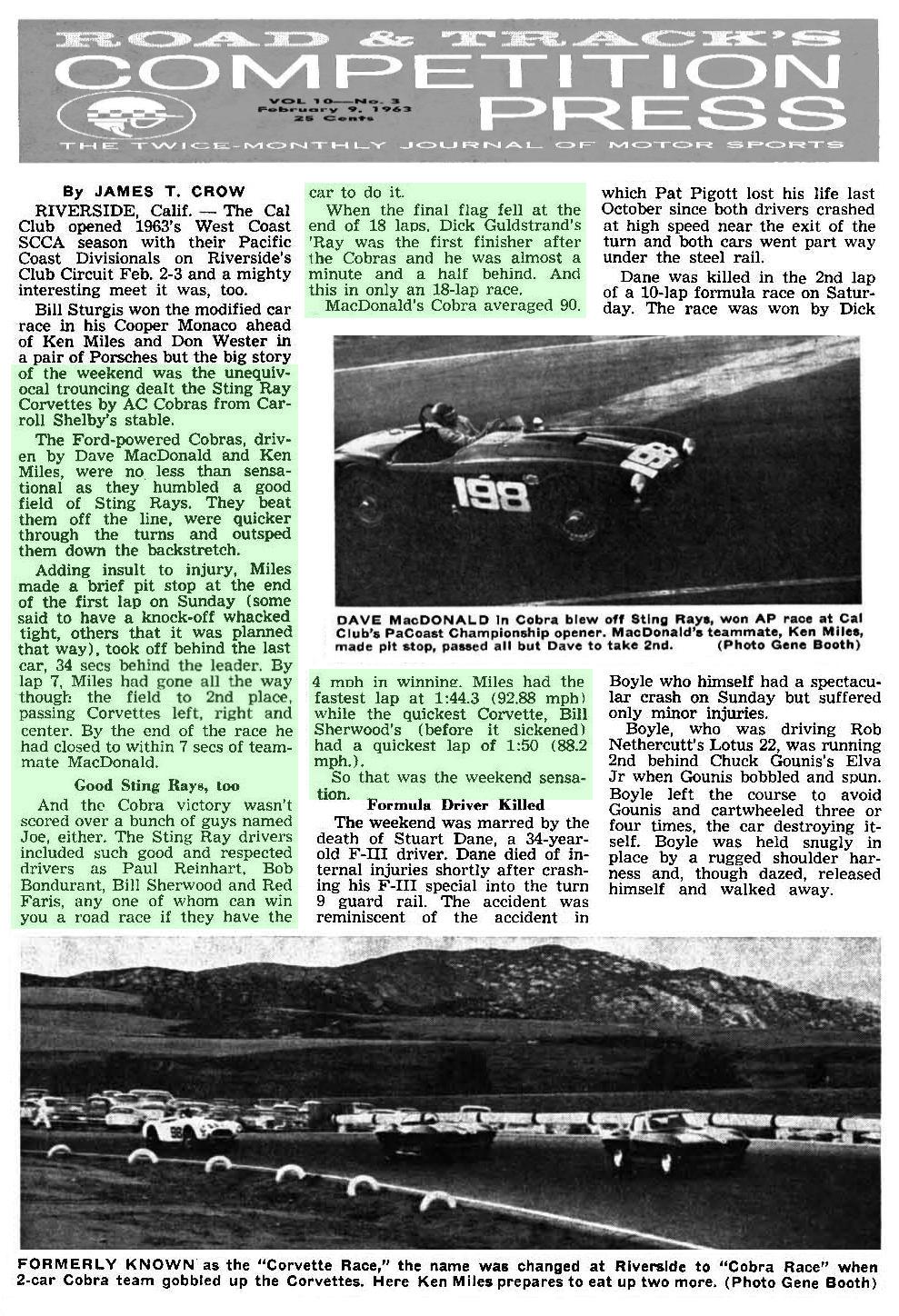 Sports Car Graphic magazine article talking about Ken Miles pitting after the first lap to check for damage and roar back out. He ran a
great race to come back and finish within 10 seconds of Dave

Magazine article with paragraph about the Riverside race and then the upcoming Dodger Stadium race. 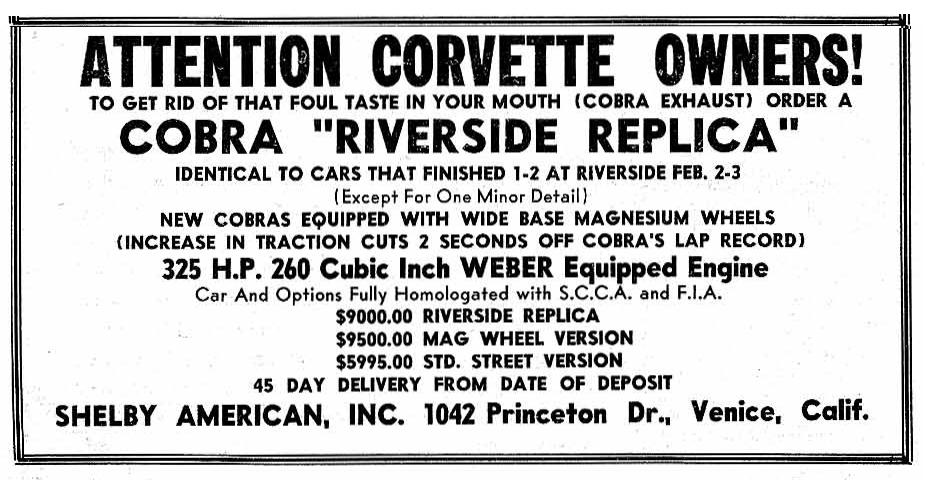 NoGrip Racing incorporated a Dave MacDonald driven Shelby Cobra Roadster mod into their video game. This is the 260ci Cobra, painted
and numbered, as it was in 1963 when Dave drove it to victory at Riverside for its historic first-ever win 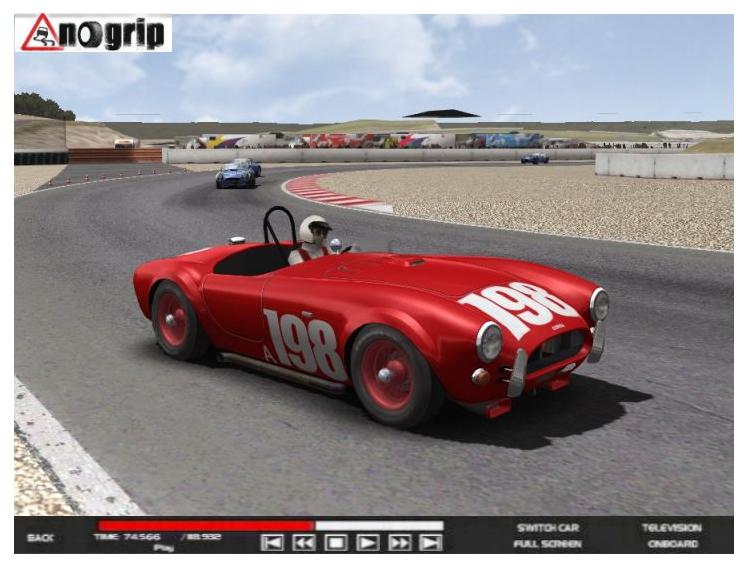 2011 Shelby Hauler with Dave's image on the side. Hauler travels the country transporting Shelby cars to various auto shows