Dave MacDonald off to a slow start in Saturday's race but begins to move through the field. Here he is stalking Paul Reinhart's Ray.

Dick Guldstrand running 3rd behind MacDonald & Reinhart but ahead of the rest of the tightly grouped pack. 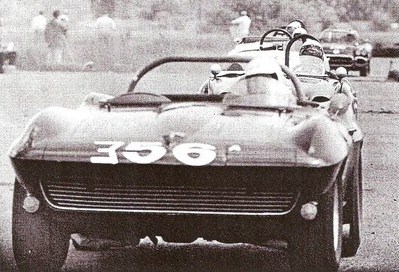 Dave MacDonald shown here leading competitors in all divisions before going on to take the win on Saturday. 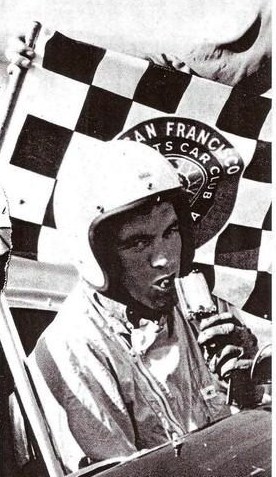 Another photo after Saturday's win shows a happy Dave MacDonald. Red Faris's Corvette Stingray is in the background

Sunday morning and Dave MacDonald's Cobra ready to battle the Corvette heavy field again after scoring victory in Saturday race.
Below: Dave and the crew working on the Cobra Roadster before the Saturday race. Dave was also an brilliant mechanic. Before Sunday's race Cobra driver Dave MacDonald jokes to Laguna Seca race queen Sharon Brace that he'll see her in the winners
circle again after this race. Photo Norton Pearl, courtesy MotorBinder by Roy Spencer.

Sunday's feature race goes green and Dave MacDonald has his Cobra streaking away from the grid in 4th place. Just out of view are
Stingrays of Paul Reinhart, Dick Guldstrand & Bill Sherwood. Corvette star Red Faris behind Dave and Don Meline is in #418.

Dave MacDonald rumbles his Shelby Cobra past Sherwood & Guldstrand and sets his sights on leader Paul Reinhart. (Photo?) But legendary Corvette wheelman Dick Guldstrand fights back and pulls his Corvette roadster back even with Dave MacDonald's
Cobra as they power through a sweeping Cotati turn (photo?) Dave MacDonald pulls away from Dick Guldstrand and is now stalking Paul Reinhart for the lead. (photo?) MacDonald blows his mighty Cobra roadster past Reinhart's Stingray for the lead on lap 7. (photo?) Merle Brennan have a better day today is running strong and in the top 5 with just a few laps remaining. A repeat of Saturday's performance Dave MacDonald started slow but had his mighty Cobra Roadster all alone out front at the end. Dave MacDonald would win going away as he thunders across the finish line 48 seconds ahead of 2nd place Paul Reinhart. Dick
Guldstrand was the only other driver on the lead lap and he brought his Stingray roadster in 1 min 18 secs behind MacDonald. (Photo?) Dave MacDonald pulls into victory circle after a hard fought victory here at Cotati.

Dave MacDonald's personal trophy queen - wife Sherry - did not make this Cotati trip so Dave offered to take 2nd place finisher Paul
Reinhart's wife Wanda on the victory lap. Dave's victory laps were usually flat out with the flag bent back and here he pulls onto the
track with his foot to the floor! (Dick Guldstrand in his #56 Corvette Stingray was 3rd place finisher). Photo Albert Bochroch

Dave MacDonald and Bill Sherwood in a light moment after the weekend races at Cotati. Photo Ben Nishi 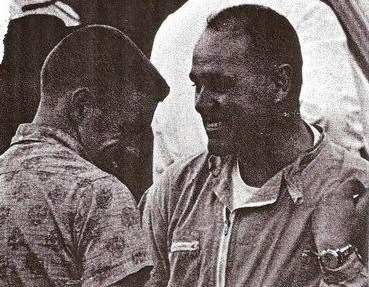 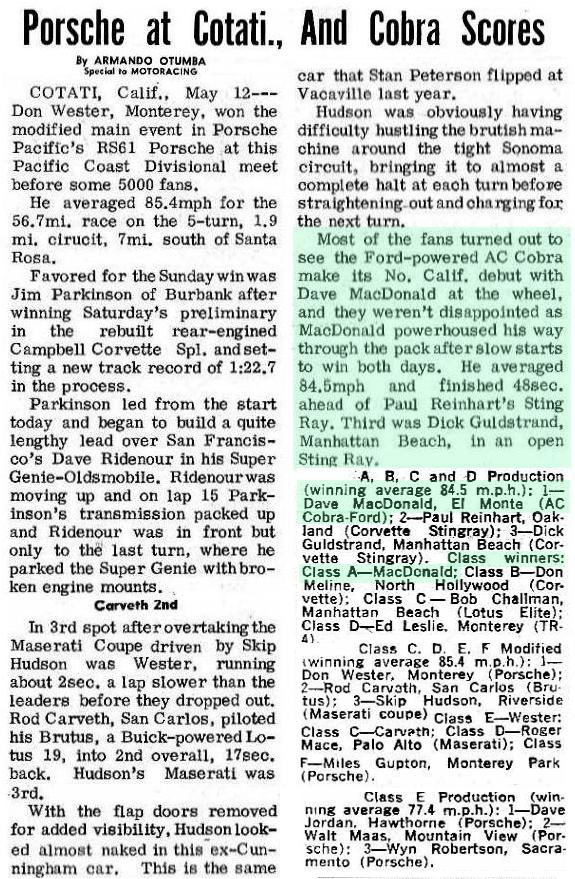 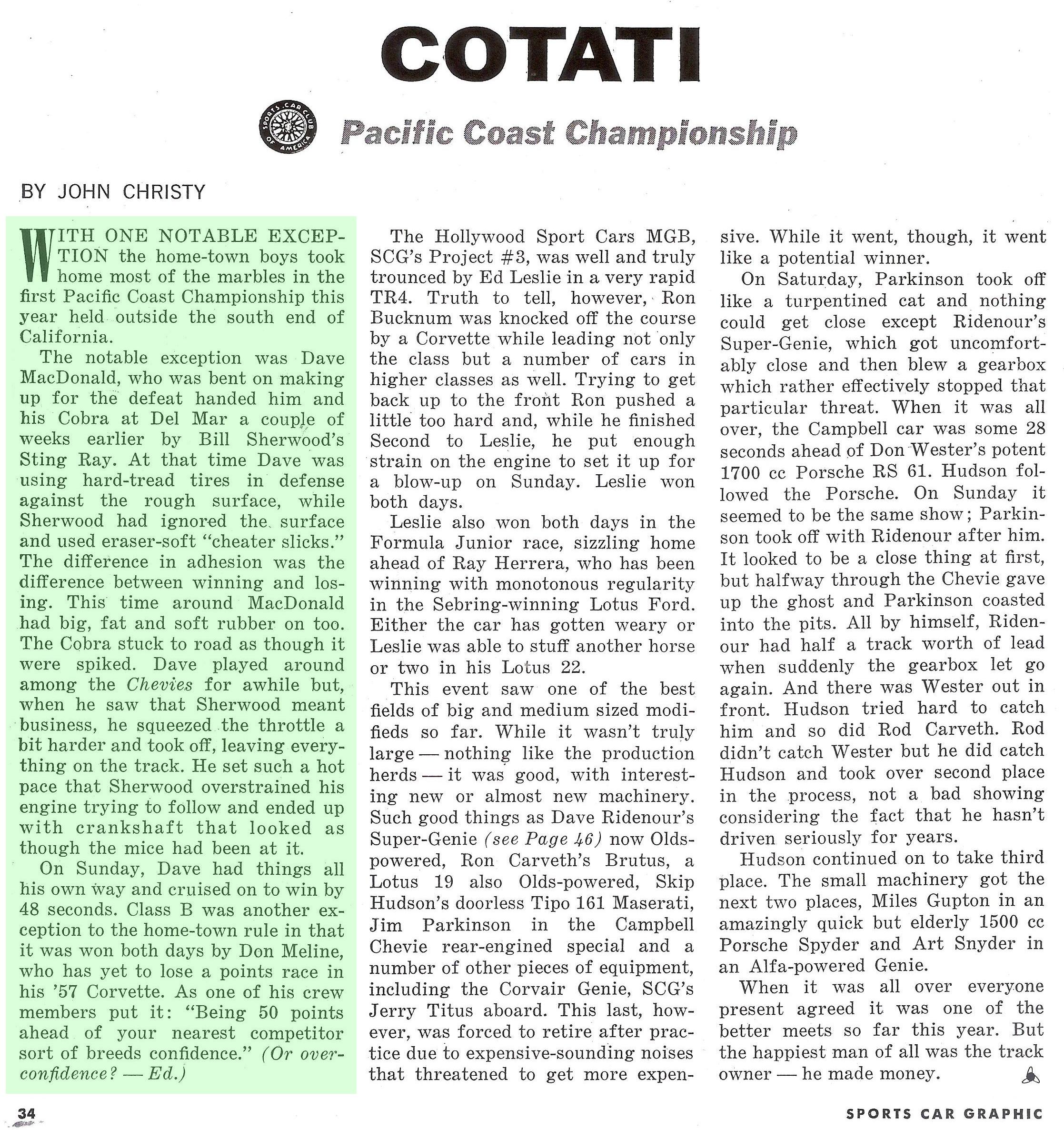 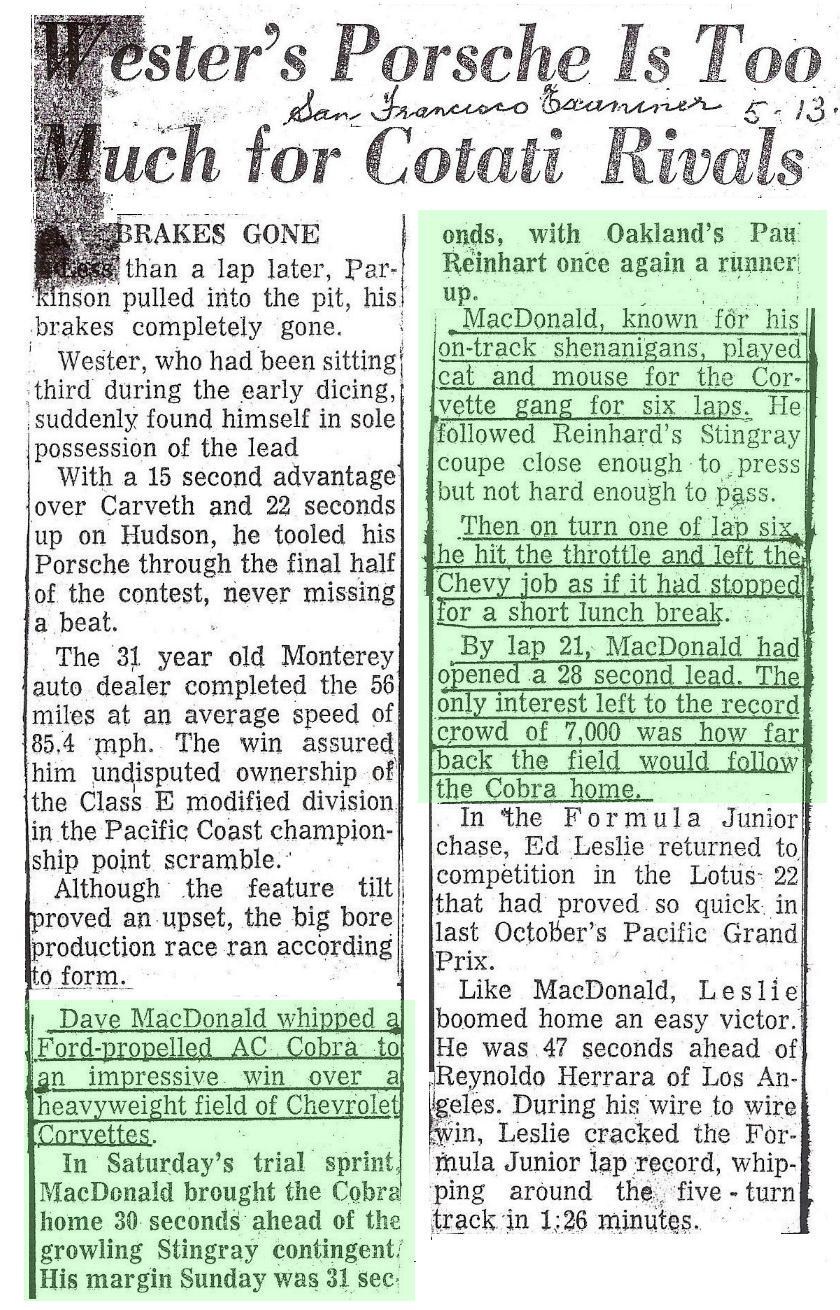 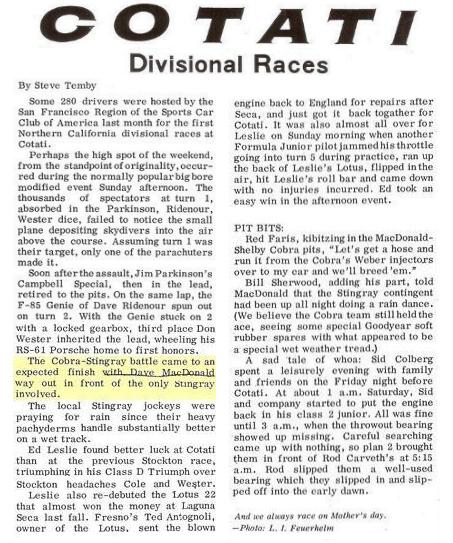 Cotati race results for Sunday May 13th 1963. MacDonald recorded the fastest speed through the trap as well as the fastest lap 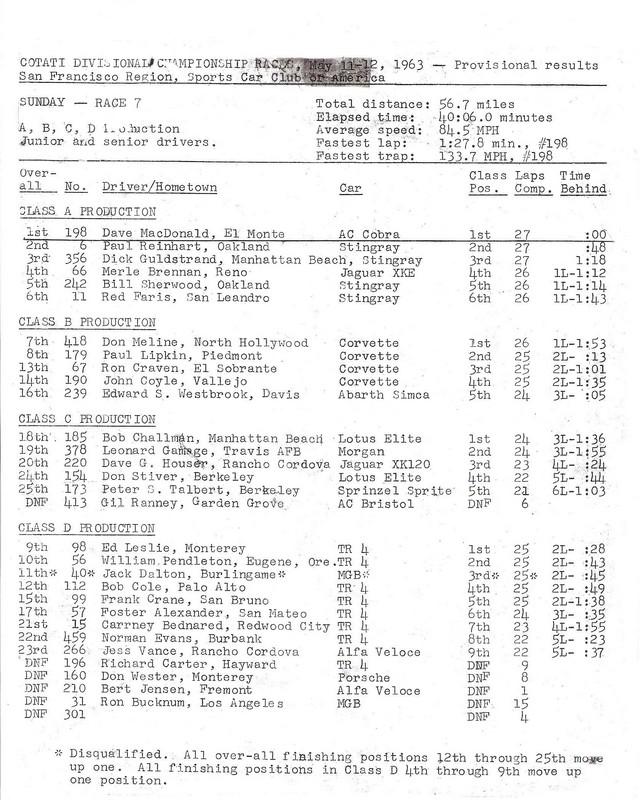 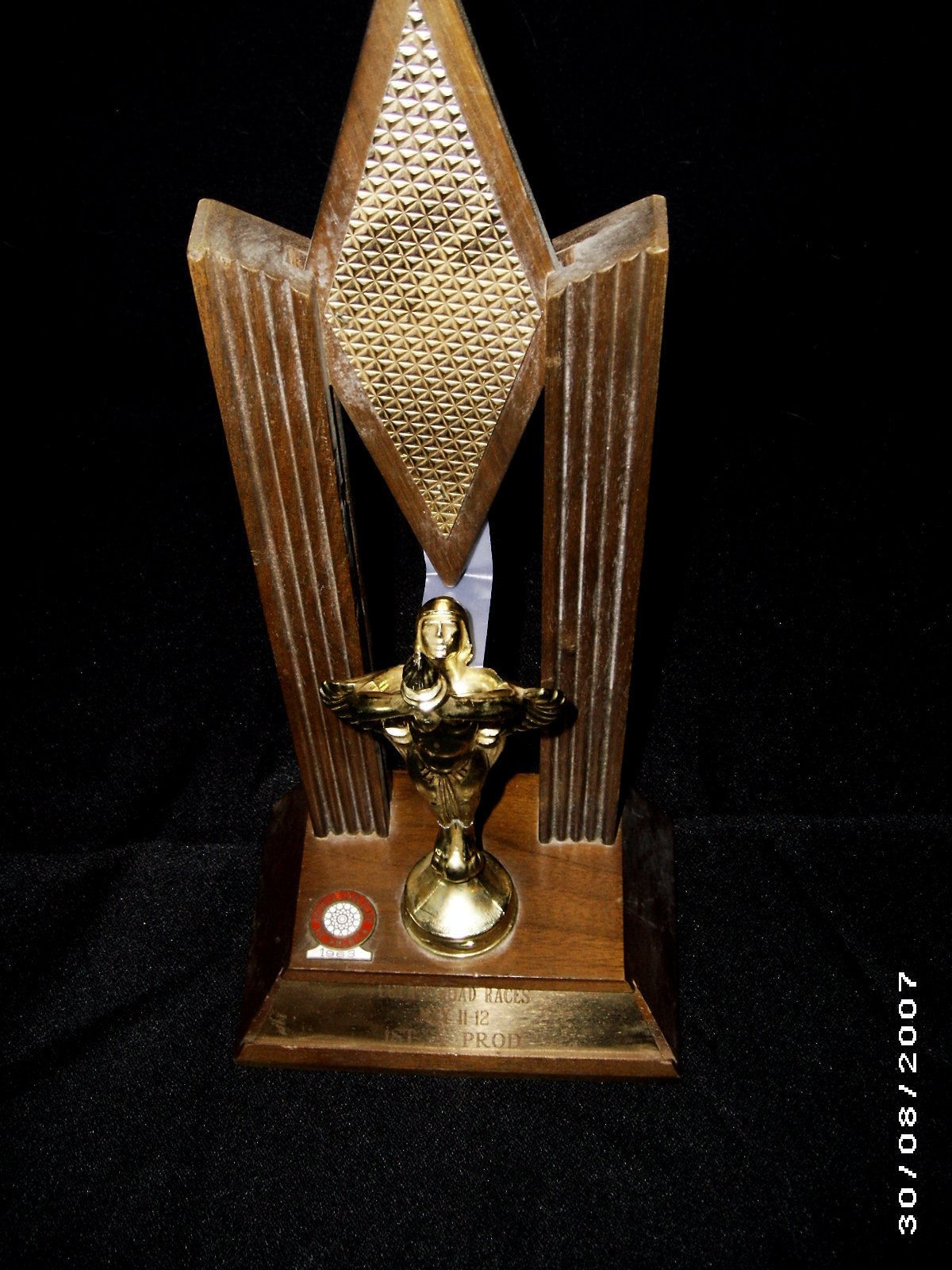