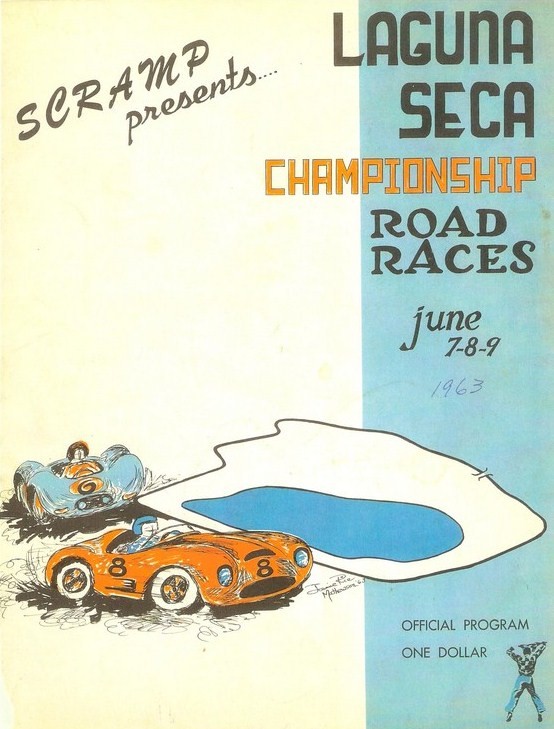 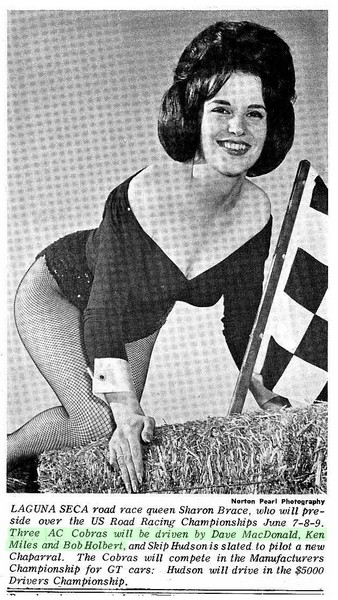 Jerry Grant gets a tremendous start and has his Lotus out front early. Photo Dave Friedman

Shelby's GT class Cobras started in the back 2 rows of this modified race but already Dave MacDonald is beginning to move through
the field. Here he goes by Corvette star Paul Reinhart driving Red Faris' Corvette Stingray. Paul's Stingray developed transmission
problems towards the end of the production race and Red offered his car to Paul for the modified race. Photo Dave Friedman

Next up is Ed Leslie as MacDonald moves in behind his Jaguar at the top of the hill. Photo Dave Friedman

Dave storms by Leslie as he continues moving toward the front. Photo Dave Friedman

Skip Hudson in a Chaparral and Chuck Parsons in a Lotus are running 2-3 on lap 10, Grant still leads. Photo Dave Friedman

Dave Ridenour and Paul Reinhart fighting for position at the top of the hill. Photo Dave Friedman

Bill Sherwood running his Corvette Stingray in the GT class rumbles around a turn and back in the pack. Photo Dave Friedman

Bob Holbert and Ken Miles lead a group thru turn 9

Lap 30 and Skip Hudson (92) comes round to lap Harry Heuer - both drivers running Chevrolet Chaparral 1's. (Heuer would retire
on lap 44 with a broken half shaft). Photo Dave Friedman

Dave MacDonald's Cobra is still running strong as he blasts through a turn at Laguna Seca. Photo Dave Friedman

Chuck Parsons now running 2nd, comes up on Boldt and prepares to lap him too. (Boldt would go out on lap 36). Photo Friedman

After getting a second wind, Don Westor continues moving back toward the front. Photo Dave Friedman

Jerry Grant laps another competitor, this time it's Stan Peterson and his Ferrari. Photo Dave Friedman

Midway through the race Holbert #196 & Miles #198 are tearing through the scenic Monterey California course. (Armando Atumba) 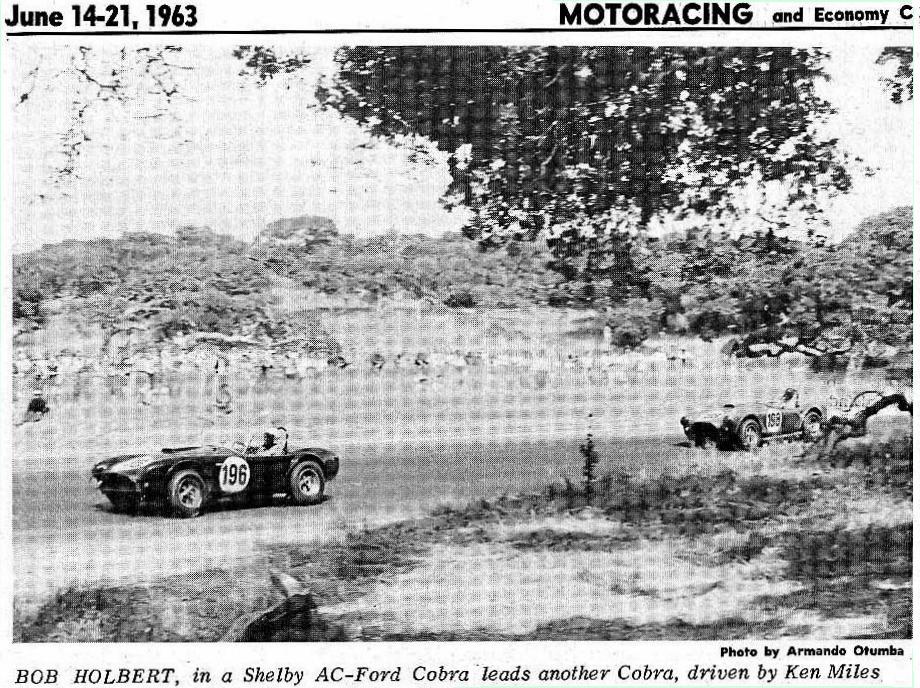 Bob Holbert & Dave MacDonald, with their Cobra Roadsters bumper to bumper continue to run through the field. (Dave Friedman)

Westor blazing back through the field slings his Porsche past the Cobras of Holbert & MacDonald. Photo Dave Friedman

47 laps in the books and so far Jerry Grant (#8) is having it his way as he laps the Lotus of Frank Monise. However on lap 51 rod
bearings in Grant's Lotus shattered and he was forced to pull his car off the track and park it for the day. Photo Dave Friedman

With Grant out the lead is inherited by Chuck Parsons in his Lotus 23. Photo The Gravelle family 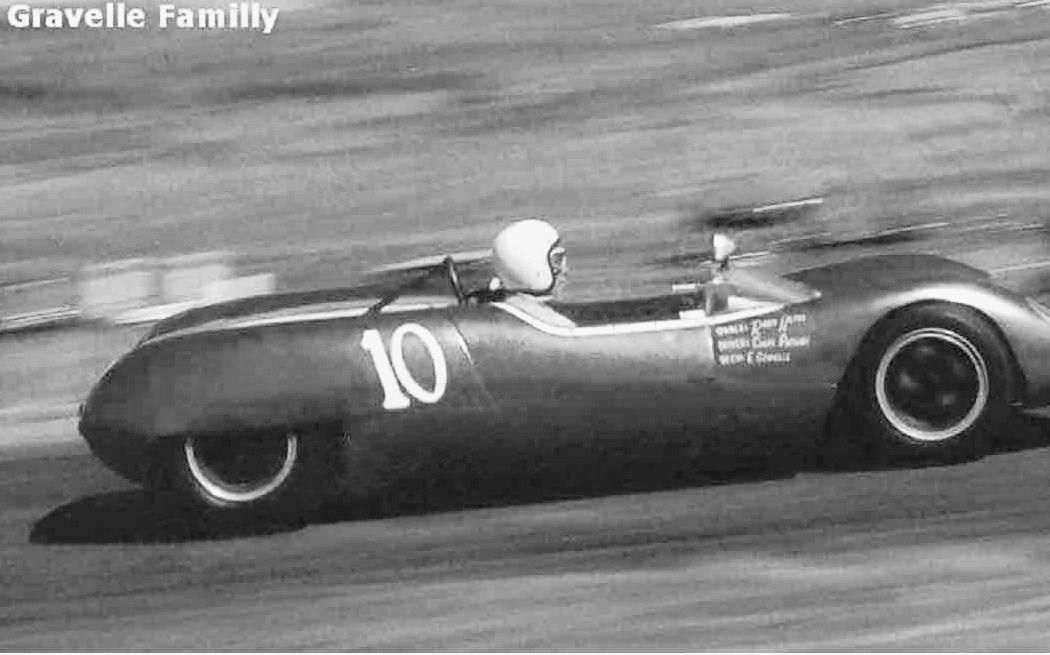 Hudson closes on Parsons as both drivers put a lap on Stan Peterson's #7 Ferrari. Photo the Peterson family collection

Don Westor has his Porsche flying and now in 3rd behind Parsons and Hudson. Photo Dave Friedman

Late in the race Skip Hudson, now 3rd behind Parsons & Westor, puts another lap on the Cobra of Ken Miles. Photo Dave Friedman

Hudson's Chaparral is running beautifully and now laps MacDonald too with only a few laps to go. Photo Dave Friedman

Parsons holds off Westor and storms "hands free" across the line to win the June 9, 1963 USRRC at Laguna Seca. Photo Pete Biro 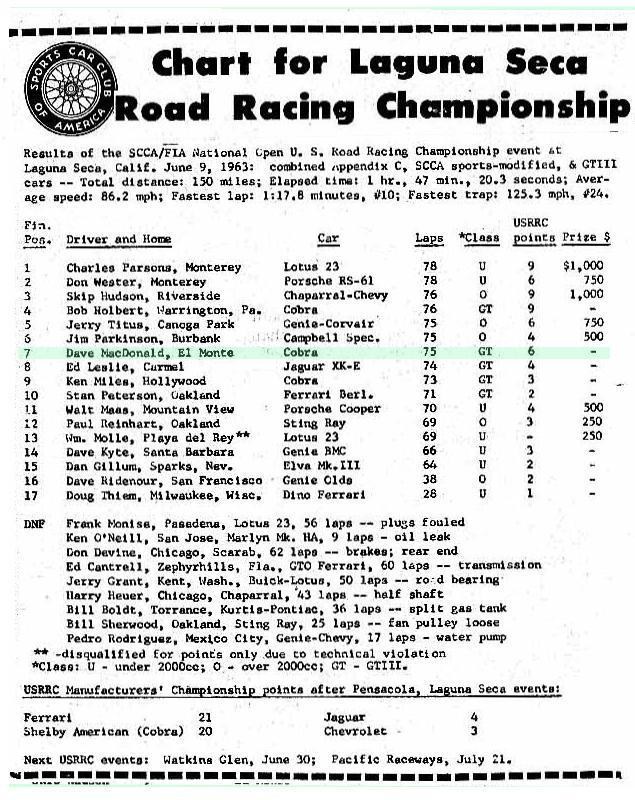 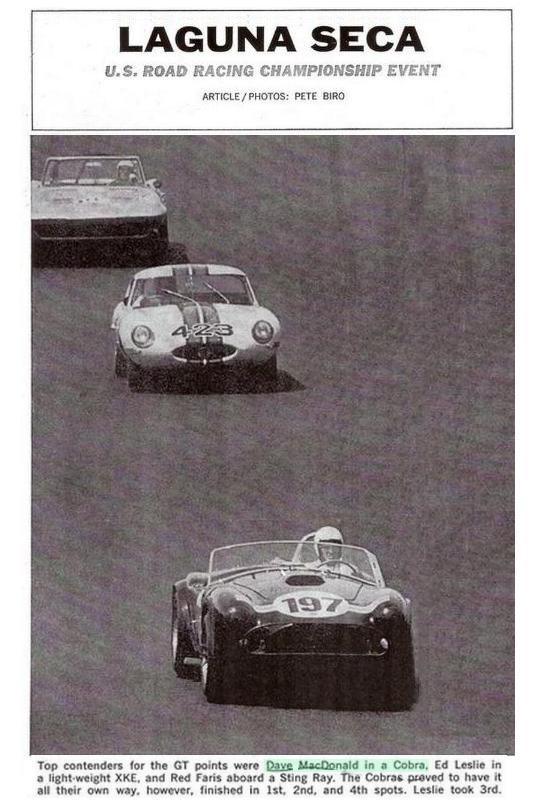 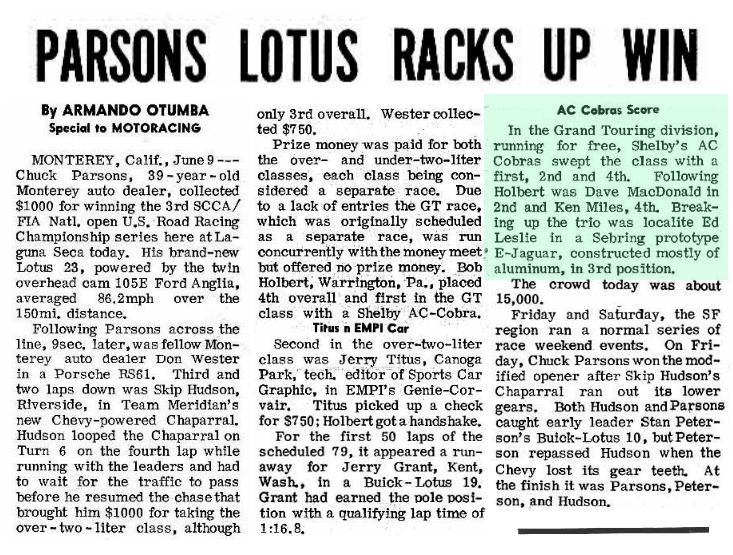 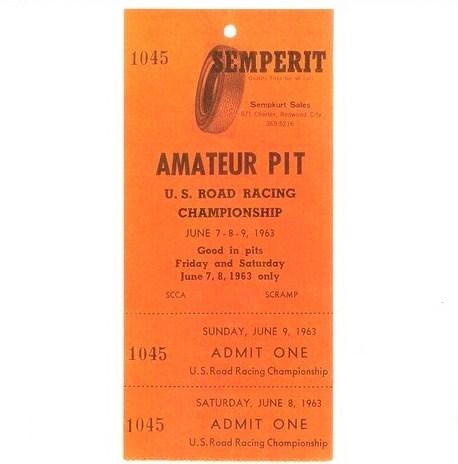 Album by the Rip Cords featuring CSX2128 on the cover. Two little known facts. 1) The Rip Chords were not actually a "real"
group. All songs on the album were performed colaborativly by the Beach Boys and Jan & Dean. 2) "Hey Little Cobra" lyricist
Carol Connors' real name is Annette Kleinbard.