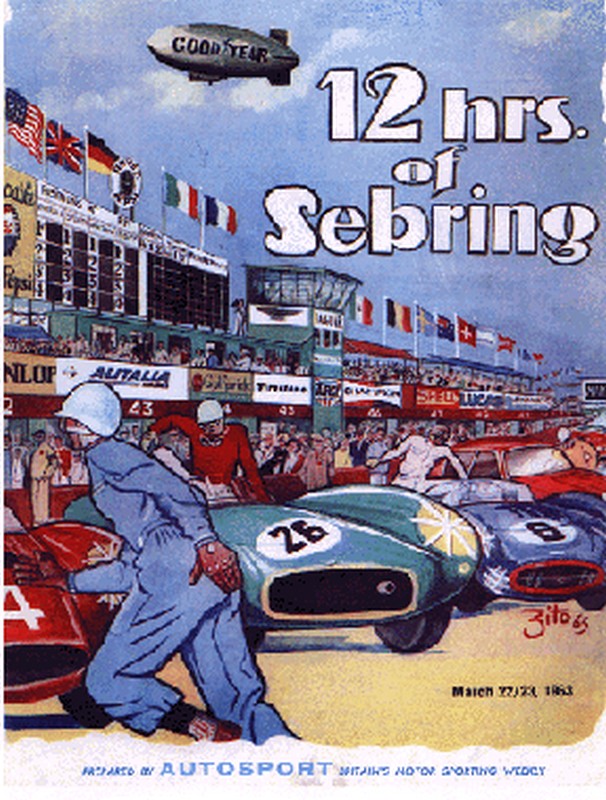 Shelby American arrives with a team of world class drivers. Note: NASCAR star Fireball Roberts is not listed below. Shelby had yet
to sign him as MacDonald's co-driver following Skip Hudson's foot injury. 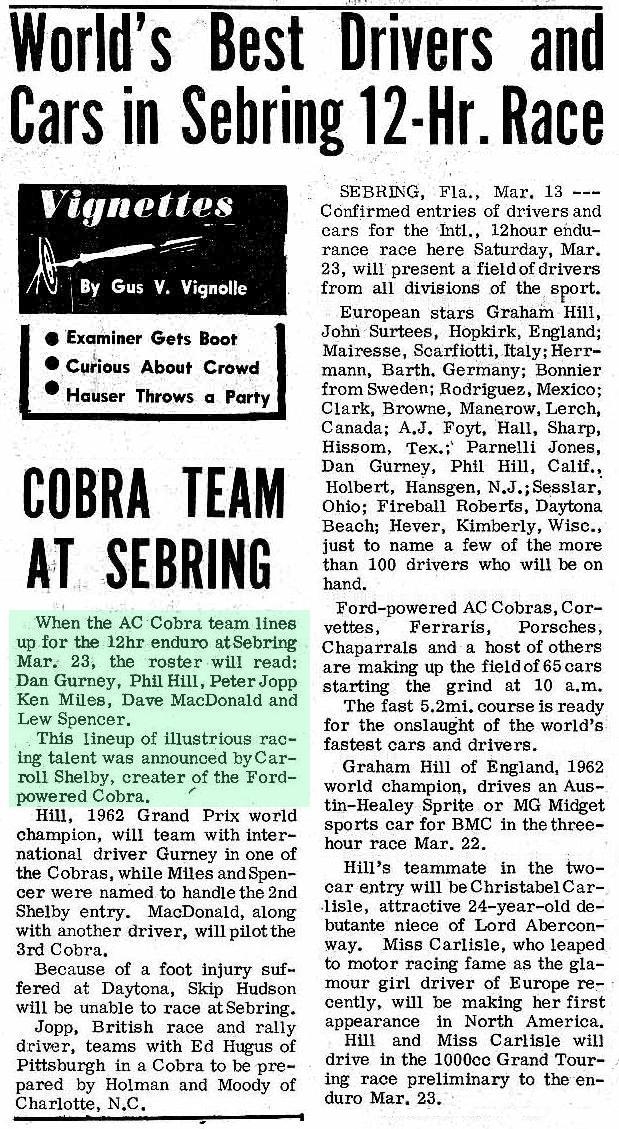 More on the selected American drivers 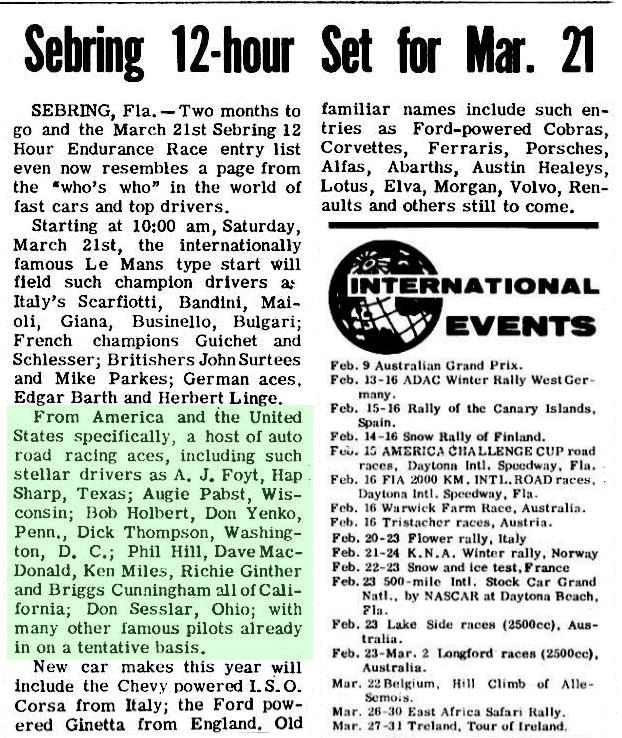 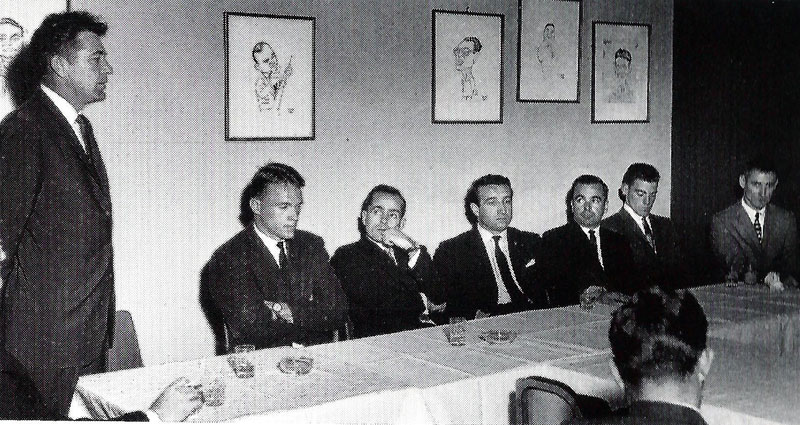 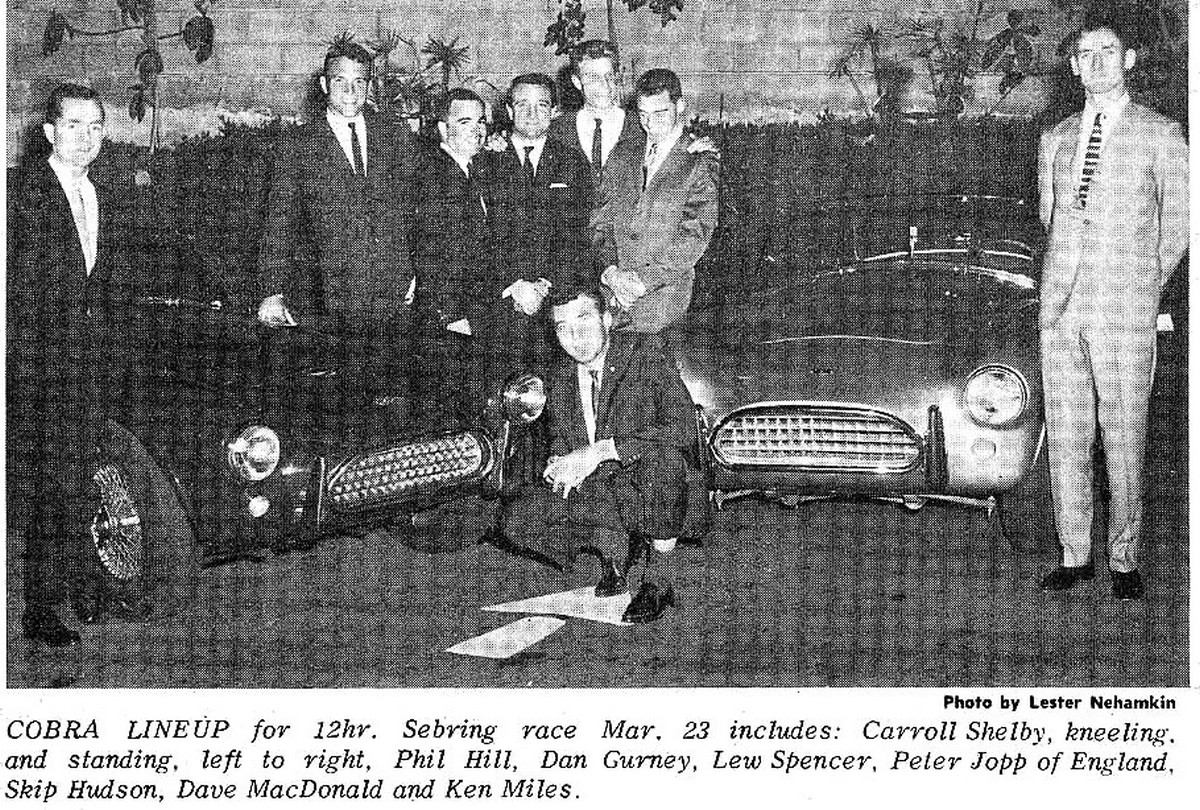 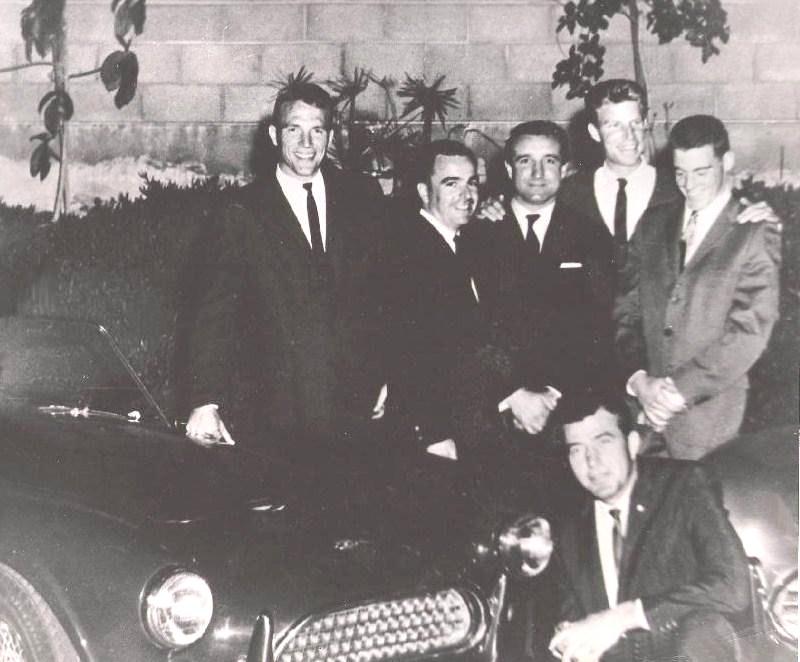 The night before the big race and Dave MacDonald (L) and the crew would work into the wee hours of the morning getting Cobra
CSX2026 ready for the 12 hr grind. Photo Dave Friedman

MacDonald & Hill continue discussing last minute strategy as they will both take the starting roles in their cars. Photo Dave Friedman.

Dave MacDonald blasting CSX2026 thru a turn ahead of Don Yenko who was moving thru the field early. (Dave Friedman)

Don Yenko dropping back in the field and now trailing Jim Hall's Chaparral and Bruce McLaren's Jag and just ahead of Lodovico
Scarfiotti's Ferrari. Thompson left the race for good on lap 14 and Hall would do the same on lap 15. Photo Dave Friedman

Dave MacDonald ahead of the Richie Ginther/Innes Ireland Ferrari 330 and the Graham Hill/Pedro Rodriguez Ferrari 250 GTO. 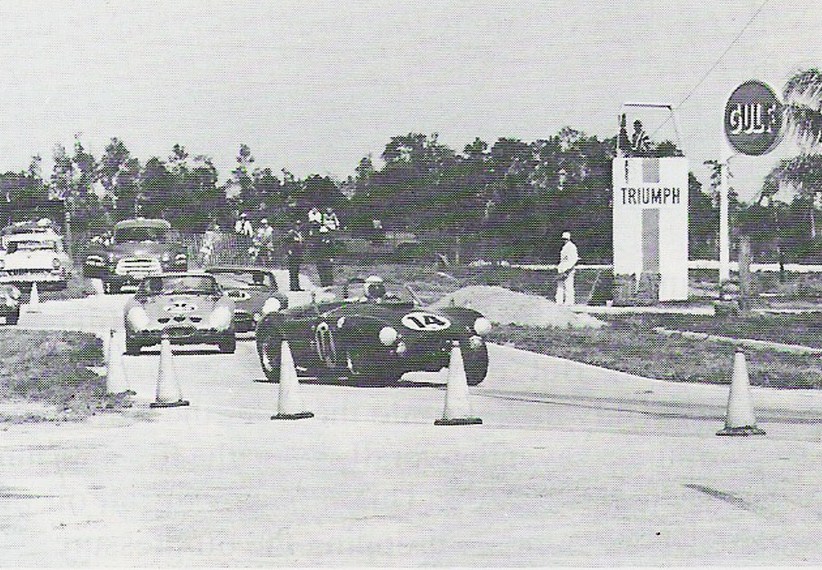 Three Shelby Cobras running tight early in the race. #15 is Dan Gurney, #12 is the Spencer/Hill car and #17 is driven by Karas/Reed,
who retired after only 20 laps and became the first Cobra entry to leave the race. They finished 61st. Photo Dave Friedman 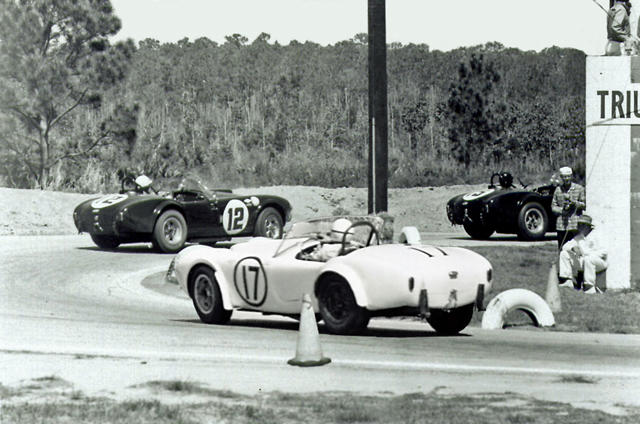 45 minutes in and Pedro Rodriguez blasting his Ferrari through a turn ahead of John Surtees. Photo Dave Friedman

Dave MacDonald sliding through the Sebring hairpin and chasing the leaders

Lorenzo Bandini's Ferrari about to put a lap on the struggling Corvette of Jerry Grant. Photo Dave Friedman

Just over 1 hour into the 12hr enduro and Dave MacDonald still charging hard after the Ferraris. Dave is running 6th here just ahead
of Ken Miles with Shelby Cobra's holding four of the top six spots at this point in the race. Photo Dave Friedman

2hr mark and Dan Gurney has moved in behind the Ferrari's of Roger Penske and David Piper. Photo Dave Friedman

Just past the 2hr mark the "Master of Oversteer" Dave MacDonald gets word to pit for a driver change. Photo Dave Friedman 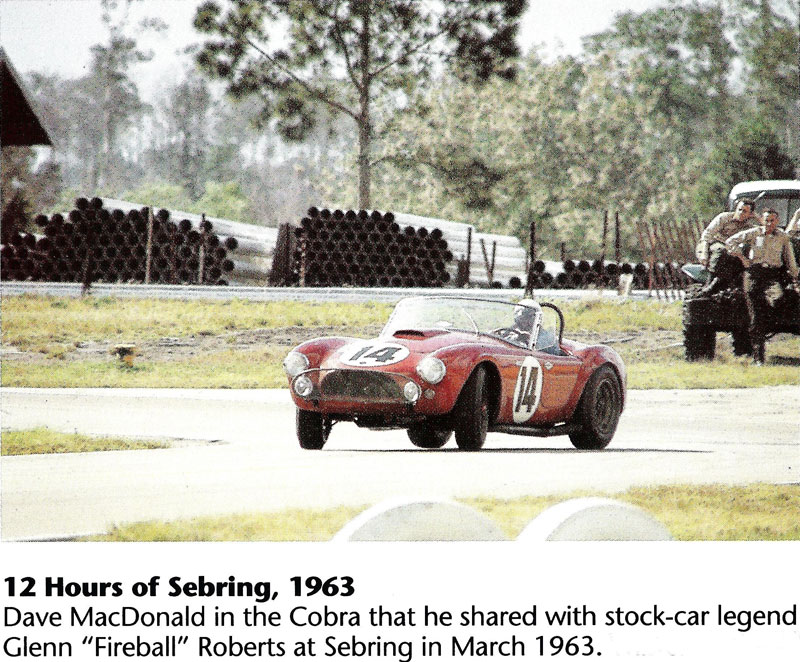 After running a flawless 2 hour & 20 minute first shift, Dave MacDonald brings the Cobra in on lap 41 in 6th place. Fireball Roberts
jumps in the cockpit and charges back out after the leaders. 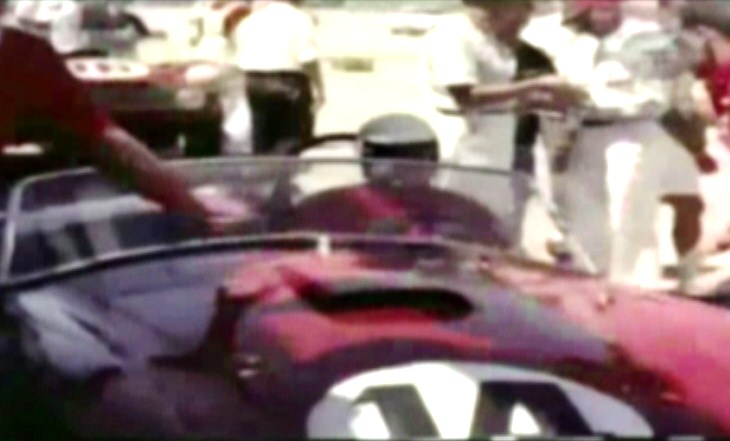 At the 3hr mark the Pedro Rodriguez/Graham Hill Ferrari 330 and the John Surtees/Ludovico Scarfiotti Ferrari 250P are running 1-2. 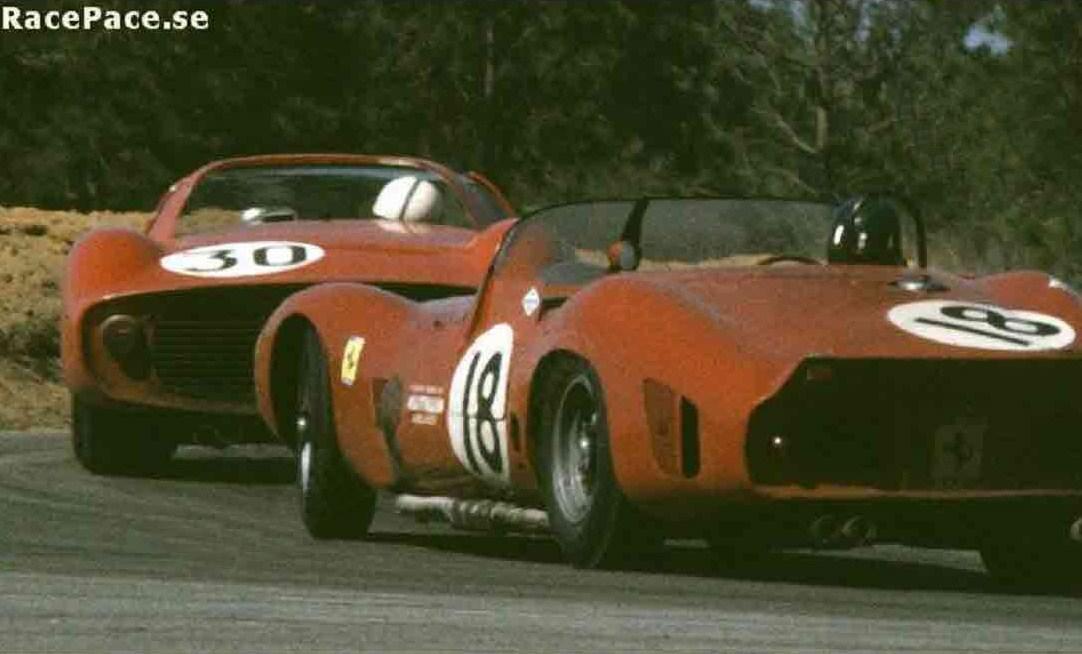 Fireball Roberts still getting used to the course as he misses a turn early in his shift and sends CSX2026 into the bales. Fireball Roberts has CSX2026 back on cours and charging thru the hairpin making up time. Photo Dave Friedman 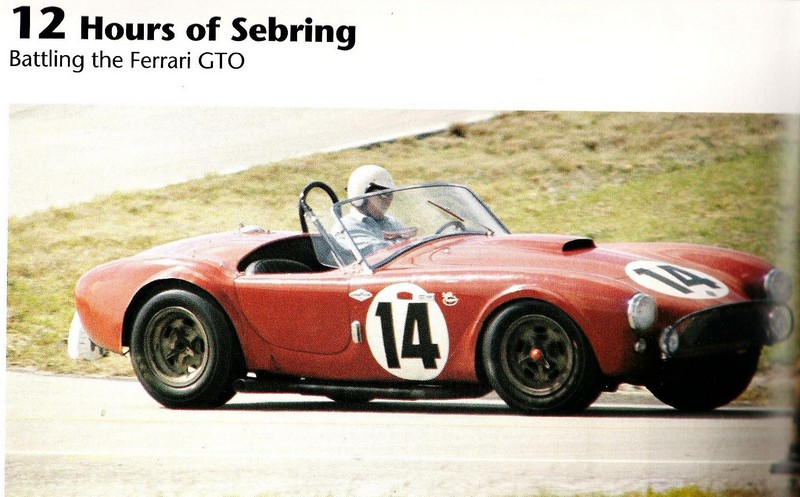 Charlie Hayes has his Ferrari 250 running 14th just past the 3hr mark.

Dan Gurney has his Ford Cobra leading two Chevrolet Stingrays as they go through a turn. Photo Dave Friedman

Bad luck hits the team on lap 53 as Roberts brings the Cobra in with a fried differential...they're done. The MacDonald/Roberts entry
was in 11th place at the time and was credited with a 53rd place finish after running 3 hours, 10 minutes & 270 miles 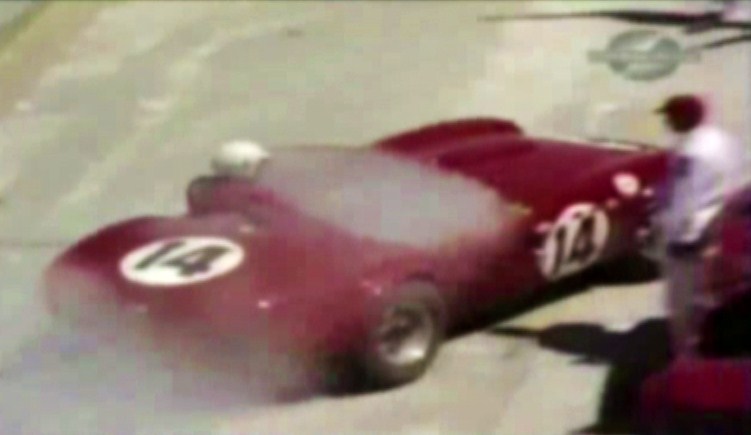 Carroll Shelby is not too happy with the early retirement as the CSX2026's day looked promising. Photo Dave Friedman

The Ken Miles #16 Cobra is still in the race and running strong at this point. Below is actually driver Dan Gurney taking a brief stint in
the car and going by the Jerry Grant/Don Campbell Corvette Stingray. Grant & Campbell finished 54th. Photo Friedman 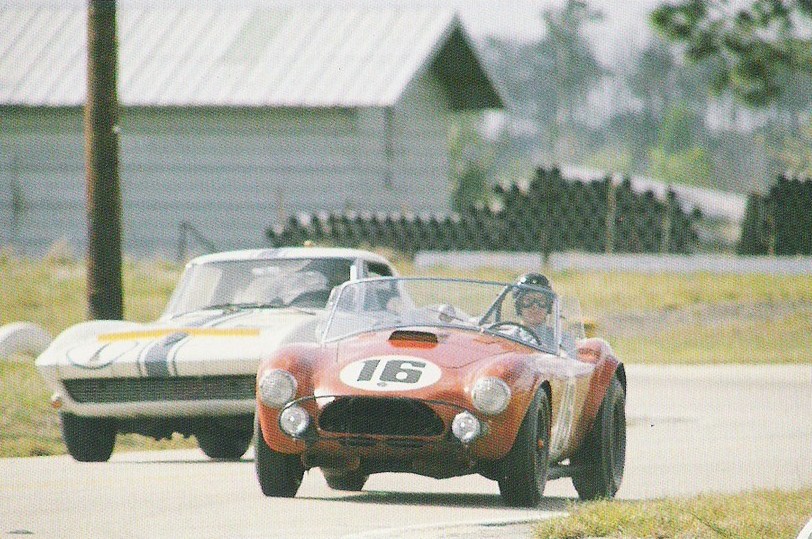 Miles back in his Cobra & leading the Charlie Hayes/Doug Thiem Ferrari 250 GTO through a turn. Miles however dropped out a few
laps later when a steering arm broke and finished in 51st position. Hayes & Thiem completed 179 laps (930 miles) and placed 18th.

The Foyt/Hurtibise Corvette Stingray flying down the straight with AJ Foyt at the wheel. They went out after 84 laps and finished 45th 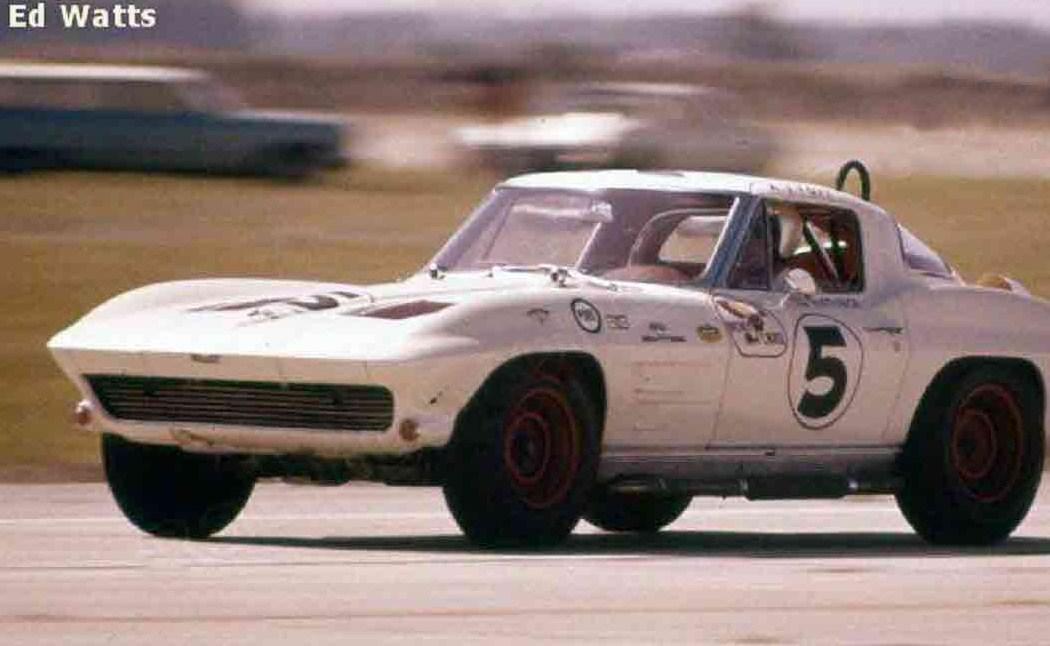 The #15 Gurney/Hill Cobra ahead of the #22 Briggs Cunningham/John Fitch Jag. Cunningham & Fitch completed a total of 112 laps
(582 miles) and placed their Jaguar in 43rd position. Photo Louis Galanos 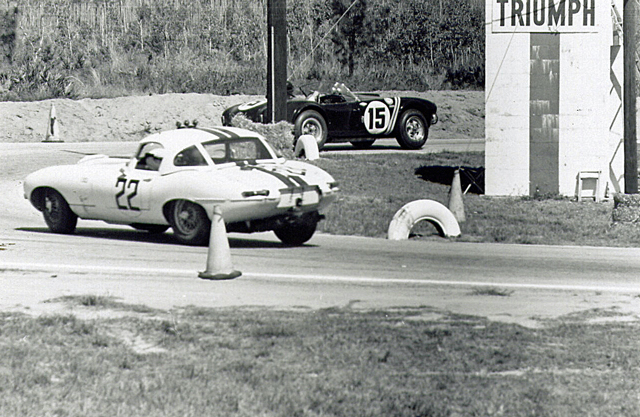 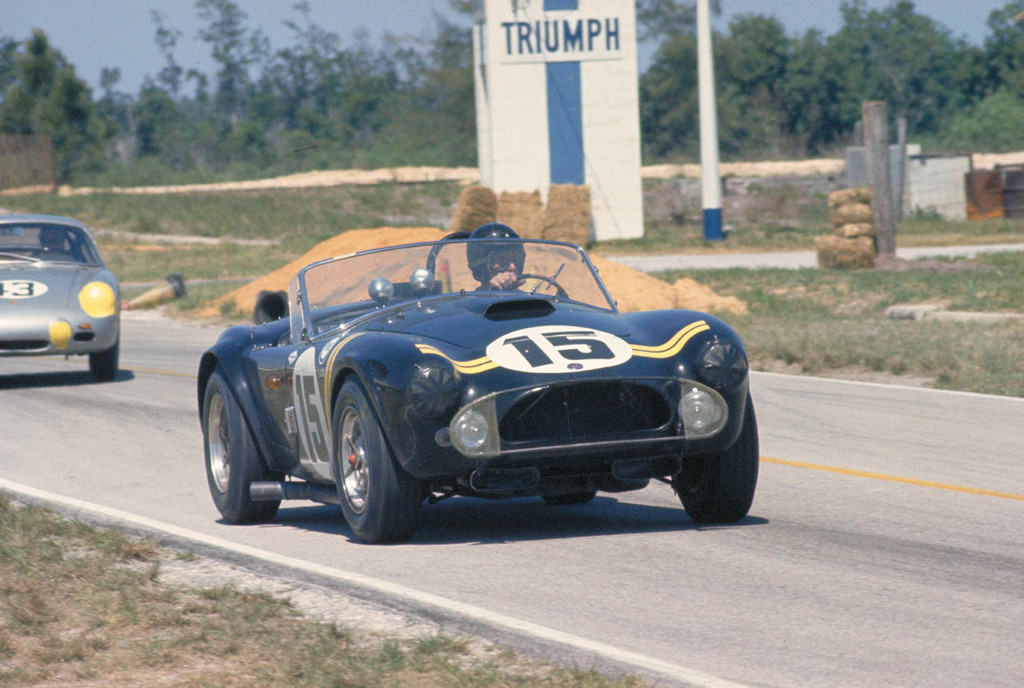 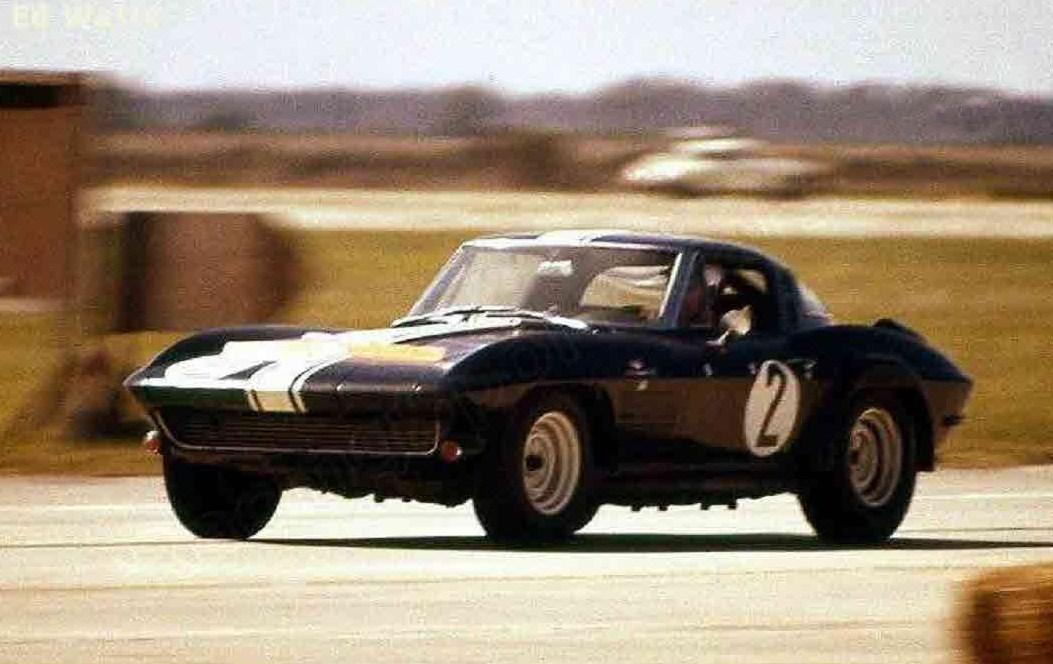 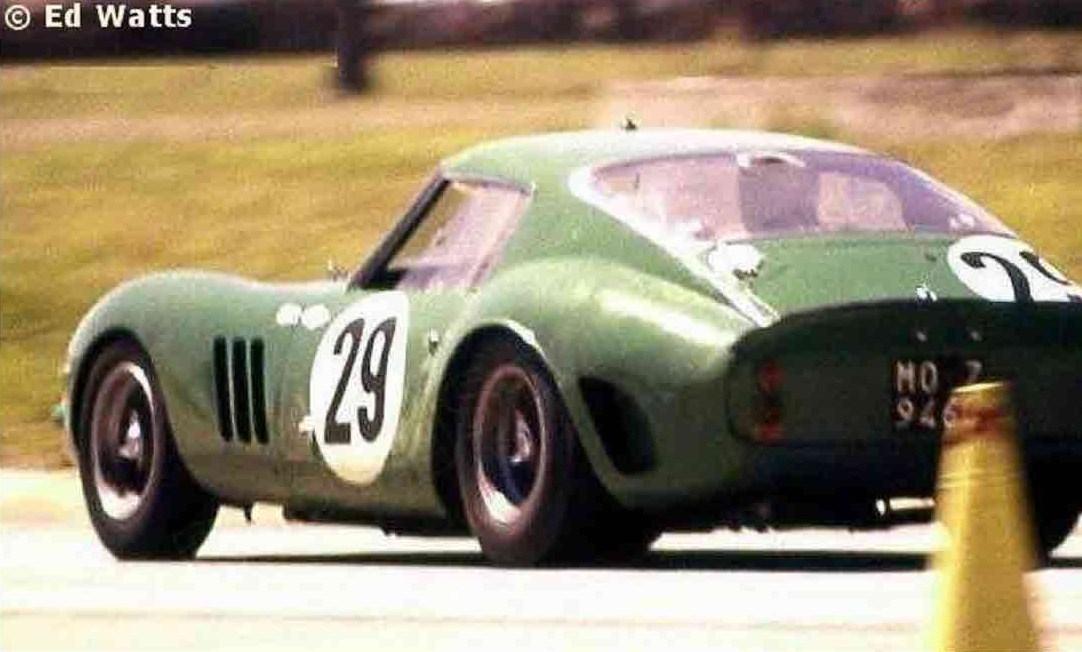 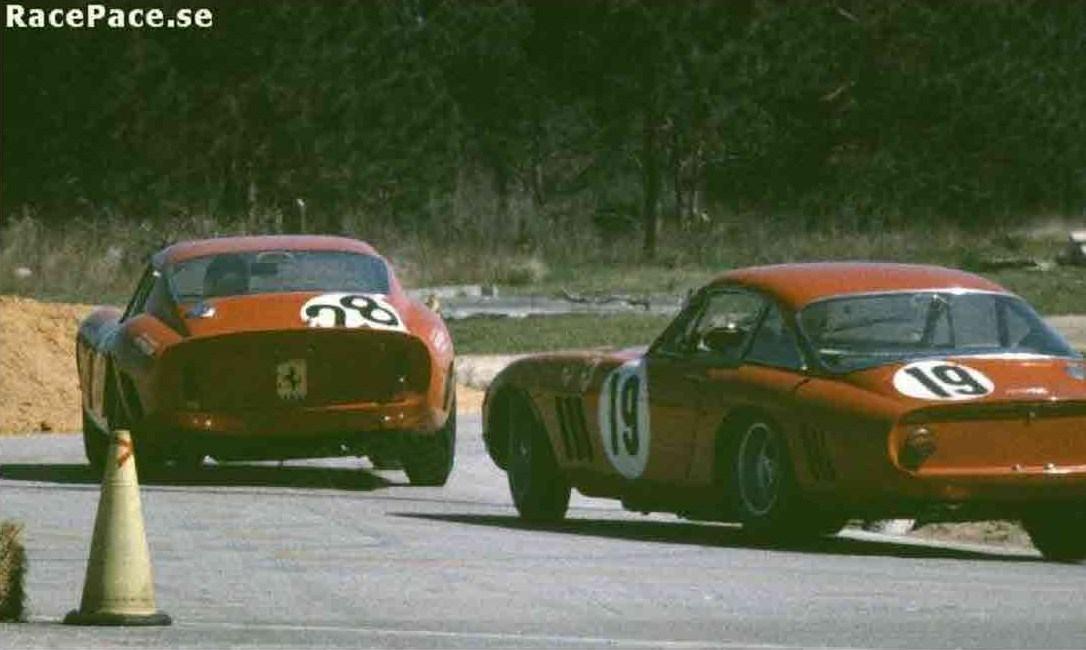 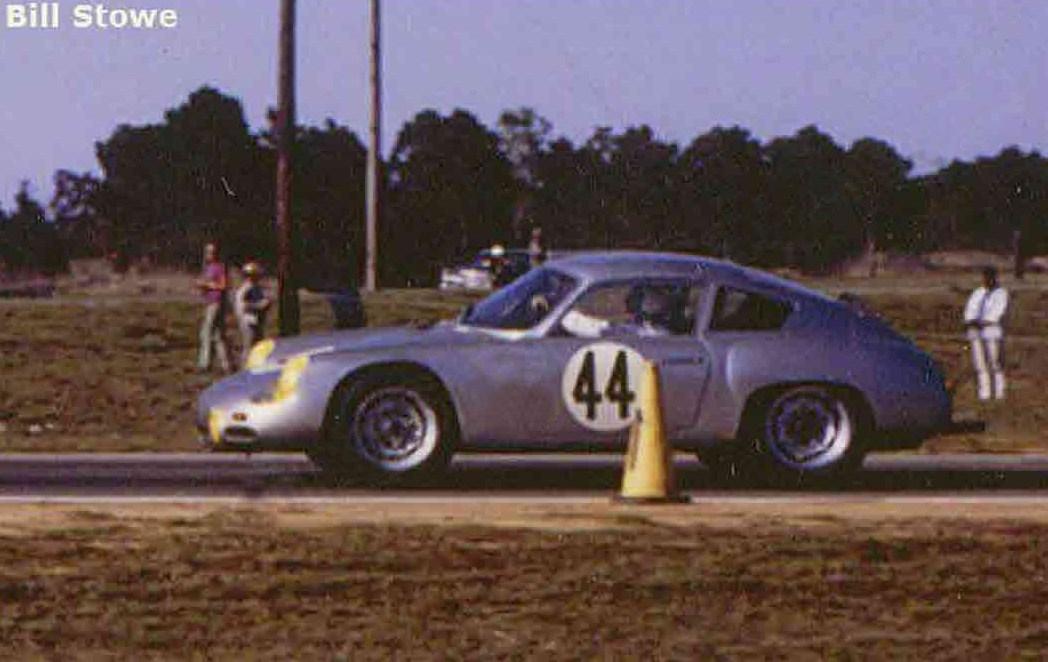 The Richie Ginther/Innes Ireland Ferrari 250 GTO challenged late but could get no higher than 6th. They completed 196 laps. (Stowe) 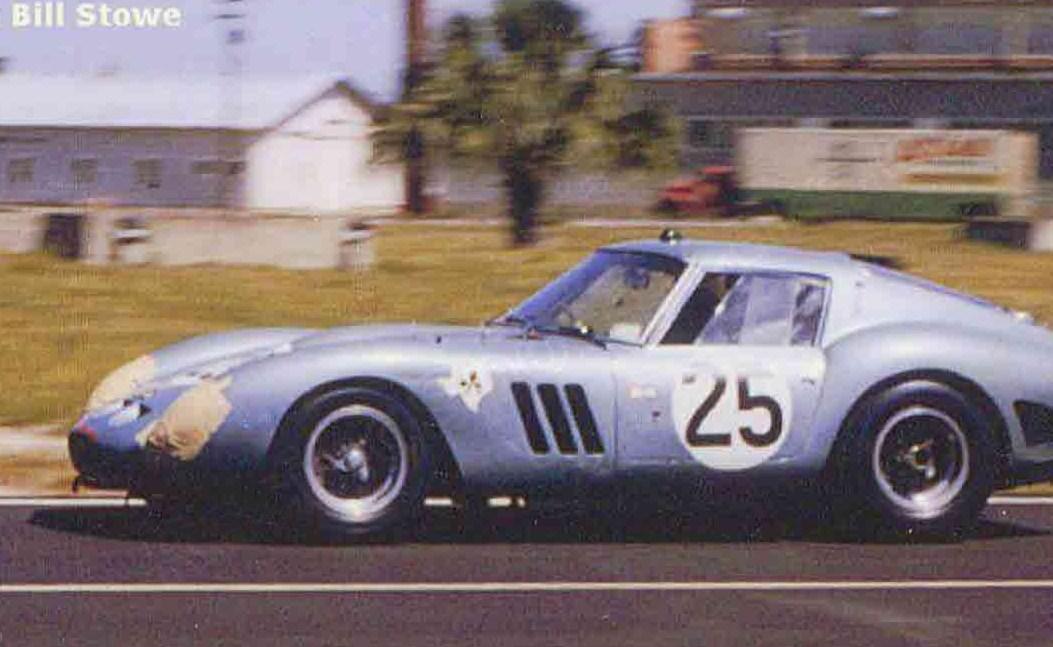 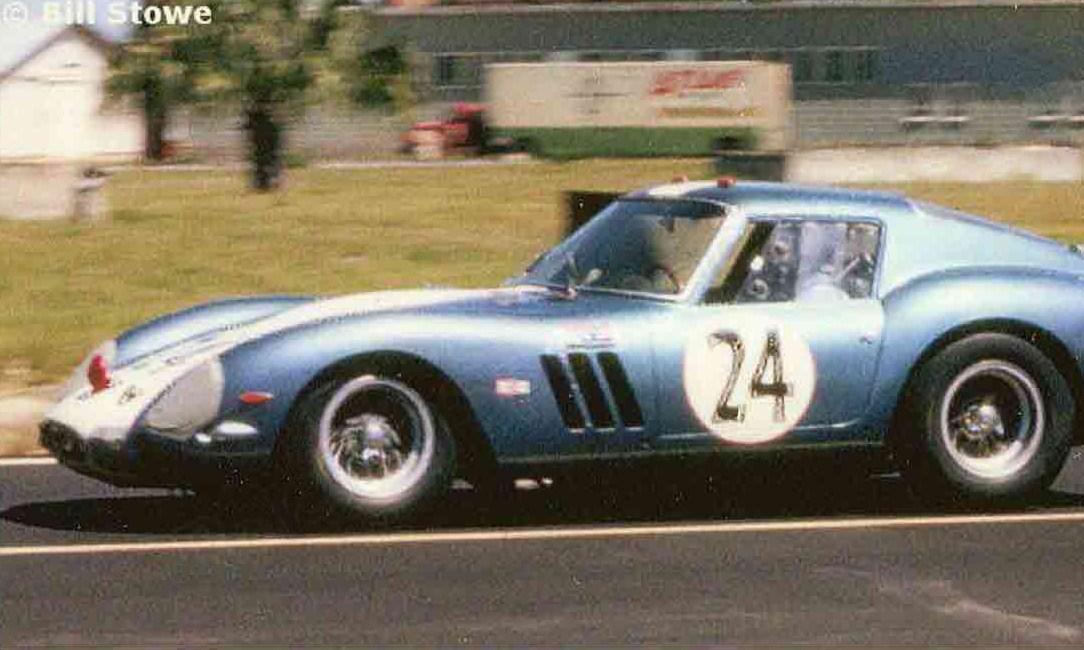 The Mairesse/Vaccarella/Bandini Ferrari 250P completed 208 laps and finished 2nd, only one lap behind the winner. (Bill Stowe) 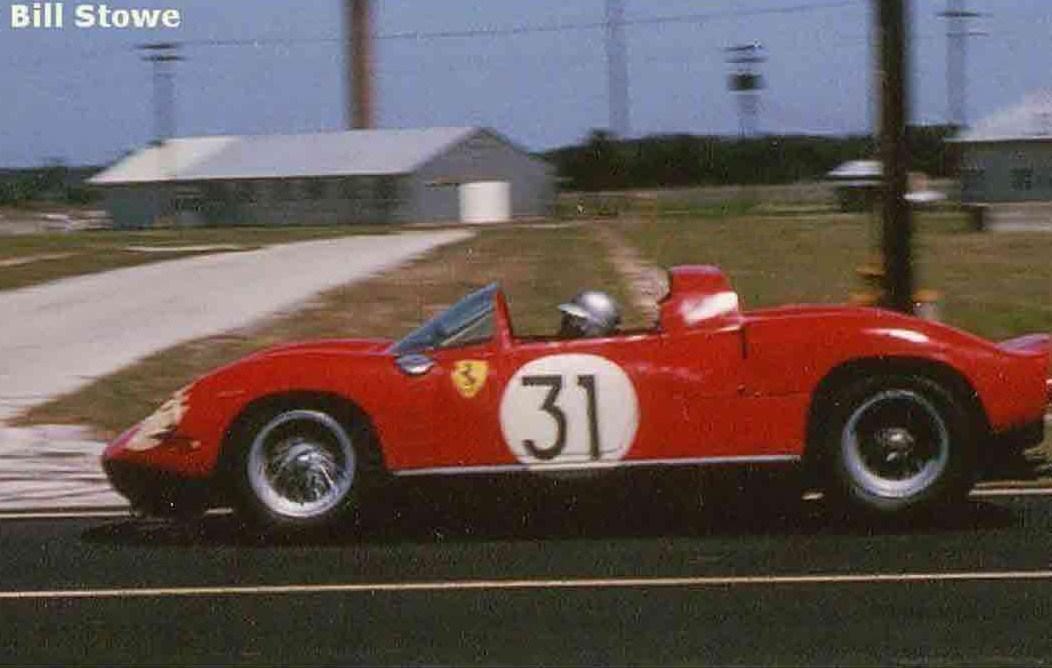 The John Surtees/Ludovico Scarfiotti Ferrari 250 GTO went on to win the 1963 12hrs of Sebring. Ferrari took the top 6 spots 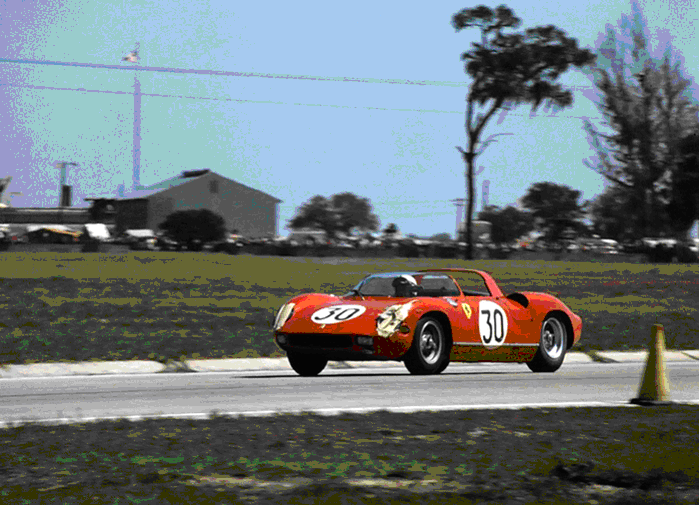 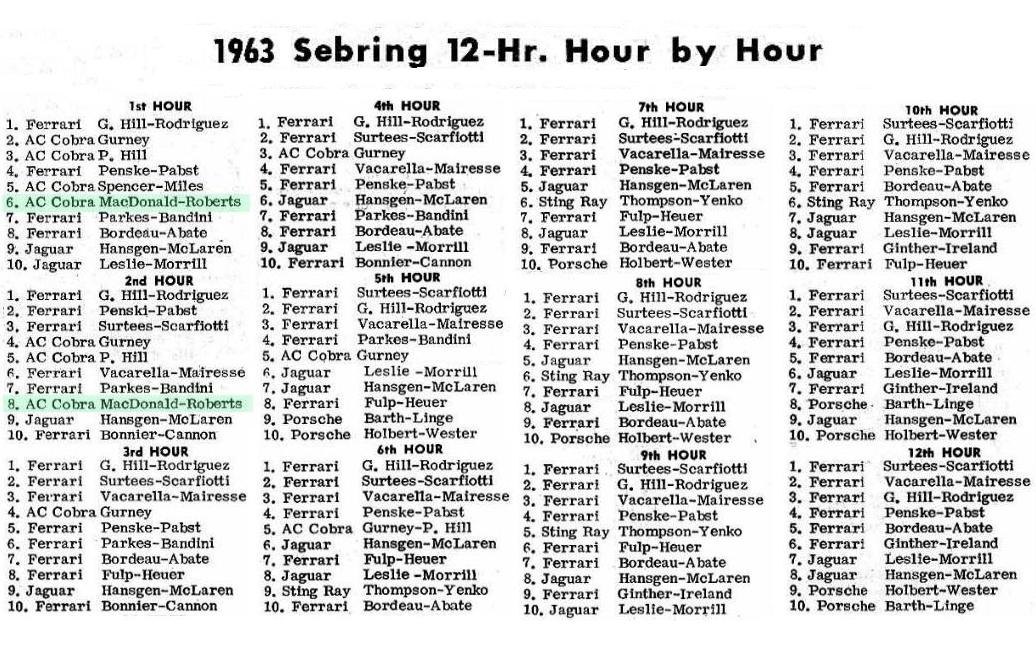 Below: Scale model of the Shelby Cobra Dave MacDonald & Fireball Roberts drove in the 12hrs of Sebring in 1963

The mighty Cobra Roadster knocked Ferrari from its perch and wound up winning the 1963 USRRC Championship! Photo Pete Brock

2011 Shelby Hauler with Dave's image on the side. Hauler travels the country transporting Shelby cars to various auto shows