March 21, 1964 - Dave MacDonald drives Cobra Daytona Coupe CSX2287 in the 12 HRS of Sebring - This race followed the Coupe's
debut in the Daytona Continental 2000km three weeks earlier. In that race MacDonald & Holbert held a 2 1/2 lap lead before a freak fire
in the pits ended the debut. Here at the 12hrs of Sebring, the Daytona Coupe would be pitted against the worlds best cars and drivers and
Carroll Shelby again would choose Dave MacDonald & Bob Holbert to drive CSX2287. 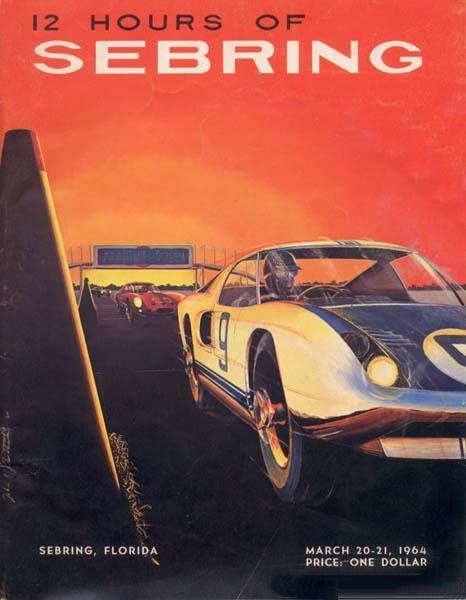 Loa Angeles Times article speculating who in Shelby's vast arsenal of drivers might be paired together and in what cars. Prior to the race, Dave MacDonald got into an argument with the Sebring police and was thrown in jail! Story: With hordes of local and
out of town teens decending on Sebring Florida for spring break the scene around the track became quite unruly. The Shelby American
team was staying inside a huge hanger and the race cars were just outside, but not well guarded. On March 18 & 19 items/tools were
stolen from the team so Dave parked the Daytona Coupe near the hanger on the night before the race. Soon a cop pulled up and told
Dave to move the Coupe and when he refused he was promptly arrested and thrown in jail. Shelby sent a crewmember to bail Dave out
at a cost of $25. Courtesy Road & Track magazine. Citation Dave MacDonald received from the Highlands County Sheriff Dept in Florida. Charge was dissmissed.

With the previous nights distractions behind them the Shelby crew gets down to business for the day's big race. The 12hrs of Sebring
was one of the biggest and richest races in the world in 1963 and was broadcast in dozens of countries. The Goodyear Blimp hovered
above to provide aerial shots of the race. Photo Dave Friedman

Shelby crewmwmbers position the Pete Brock designed Cobra Daytona Coupe on the grid for MacDonald and Holbert. CSX2287 is
lined up next to the Prototype Ferrari of Mike Parkes & Umberto Maglioli and who could have known that of the 65 cars to start this 12
hour race that these two cars would be class winners and share the winners circle later that night?

Next MacDonald (L) heads over to talk with Cobra teammate Dan Gurney. Dan will take the first shift in the Cobra Roadster he'll share
with Bob Johnson. Photo Dave Friedman

Drivers move across the track to prepare for the LeMans start. Penske's Grand Sport is next to the Daytona Coupe. Photo Dave Friedman

Before the gun sounds many drivers are already near their cars. Video of this race is in Dave's Racing Video section and you can hear
the narrator say "The driver's have jumped the gun earlier than they ever done before". Photo Dave Friedman

Lodovico Scarfiotti is first off the grid. Bob Bondurant is also out fast as he has his Cobra Roadster in the middle of the track.
Roger Penske's white Corvette Grand Sport is out 3rd. Photo Dave Friedman

Holbert (#10) and Gurney (#11) get out at the same time and tuck in behind the #17 independent Cobra Roadster driven by Charlie
Hayes, who is behind Roger Penske Corvette. The #24 Ferrari is driven by Graham Hill & Jo Bonnier. Photo Dave Friedman

Lap 3 and Dan Gurney moves his Cobra Roadster to the heels of the Pedro Rodriguez and challenges for 4th. Photo Dave Friedman

John Surtees & Pedro Rodriguez in Prototype 330 Ferraris running 2-3 while Roger Penske is 4th. Penske, as with all the Corvette Grand
Sports, is running in the big Prototype division with the Ferrari 275 & 330's, Lola's, Porsche 904's and others. Photo Dave Friedman

Later in Holbert's shift he leads a pair of Cobras through the turns. Photo Dave Friedman

AJ Foyt powers his Corvette Grand Sport through a turn ahead of the Cobras of Ken Miles (#1) & Joe Schessler. Photo Dave Friedman

Lap 31 and Charlie Kolb's beautiful Ferrari catches fire. No injuries but he, O'Brien & Hutchinson are done for the day. Photo Friedman

Porsche 904 GTS of Briggs Cunningham and Ferrari driven by Lodovico Scarfiotti blast through a turn early in the race. Photo Friedman

Holbert brings the Coupe in for Dave MacDonald to start his first shift. Al Dowd cleans the windshield while teammate Dan Gurney,
who had just brought his Cobra in for a driver change, briefs MacDonald on track conditions. Photo Dave Friedman

Dave MacDonald starts his shift running 3rd in GT and 11th overall and heads out after the leading Ferrari Prototypes. Photo Friedman

Jim Hall takes over for Penske and has his Prototype Corvette behind Don Yenko's Ferrari. Don Westor's Porsche 356B 3000 is behind.

Dave MacDonald moving through the field is running 6th OA midway through his first shift. Here he goes by David Piper in the Ferrari
GTO 250 he shares with Mike Gammino. Photo Dave Friedman

Augie Pabst/Walt Hangsen struggle with their Mecom Lola Mk.6 GT and are an early casuality, they drop out on lap 45. Photo Bill Stowe 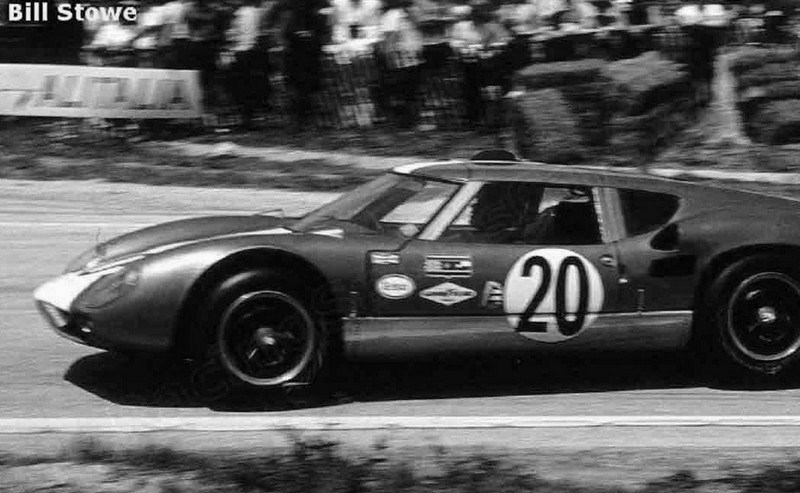 Lorenzo Bandini now behind the wheel of the #21 Ferrari is side by side with Graham Hill's Ferrari going by the start finish. (Friedman)

After taking over for Dan Gurney, Bob Johnson comes up on the heels of Larry Perkins' Ferrari GTO. Photo Dave Friedman

Jim Hall has the Corvette Grand Sport ahead of a pack of Ferraris & Porsches through a turn. Photo Dave Friedman

MacDonald flying through the 5.3 mile Sebring course will pit for a driver change at the 4 hr mark. Photo Dave Friedman

MacDonald brings the Coupe in and tells Gurney and the crew that the heat inside the cockpit is unbearable. 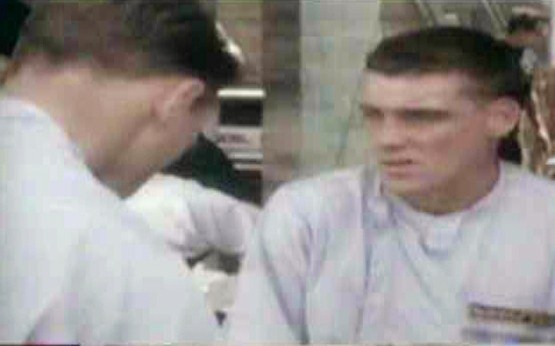 Driver's did not have special shoes in those days and most races Dave wore basic high top Jets sneakers. Here Dan Gurney helps Dave
cool his feet by removing his shoes and socks. 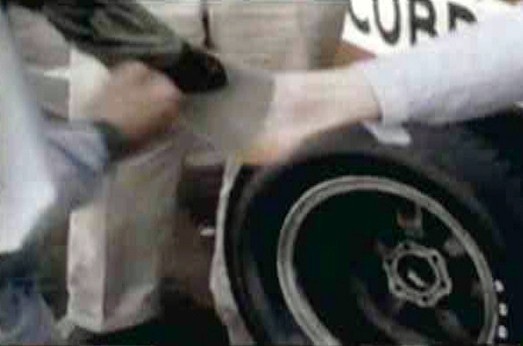 Legendary fabricator Phil Remington immediately went to work cutting a hole in the roof of the Daytona Cobra in an effort to help keep
the drivers cool. Bob Holbert was then sent back out for his shift with the Daytona Cobra running in the top 5. 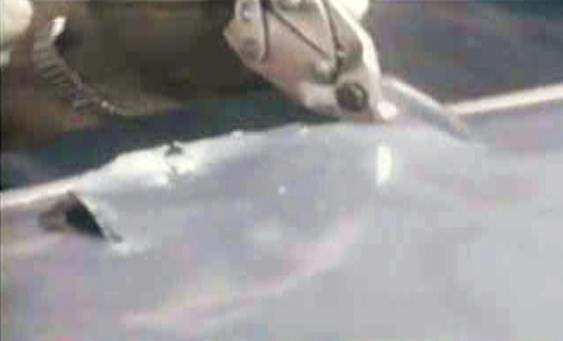 Bob Holbert back on the track and clearly evident is the hole in the Daytona Coupe's roof. Photo Dave Friedman.

Harry Heuer has his Ferrari (#32) ahead of the Ferrari driven by Corvette star Dick Thompson. Photo Dave Friedman.

Below: Bob Johnson driving the Cobra Roadster he shares with Dan Gurney is now 4th OA & 1st GT at the 6-hr mark

Remington, Shelby, Miles and MacDonald talk strategy as Dave prepares for his next tour of duty in the Coupe. Photo Dave Friedman. 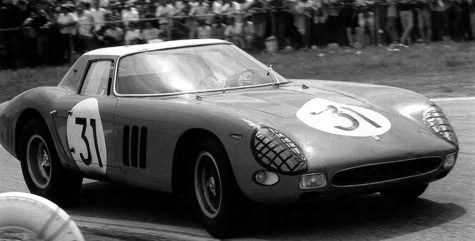 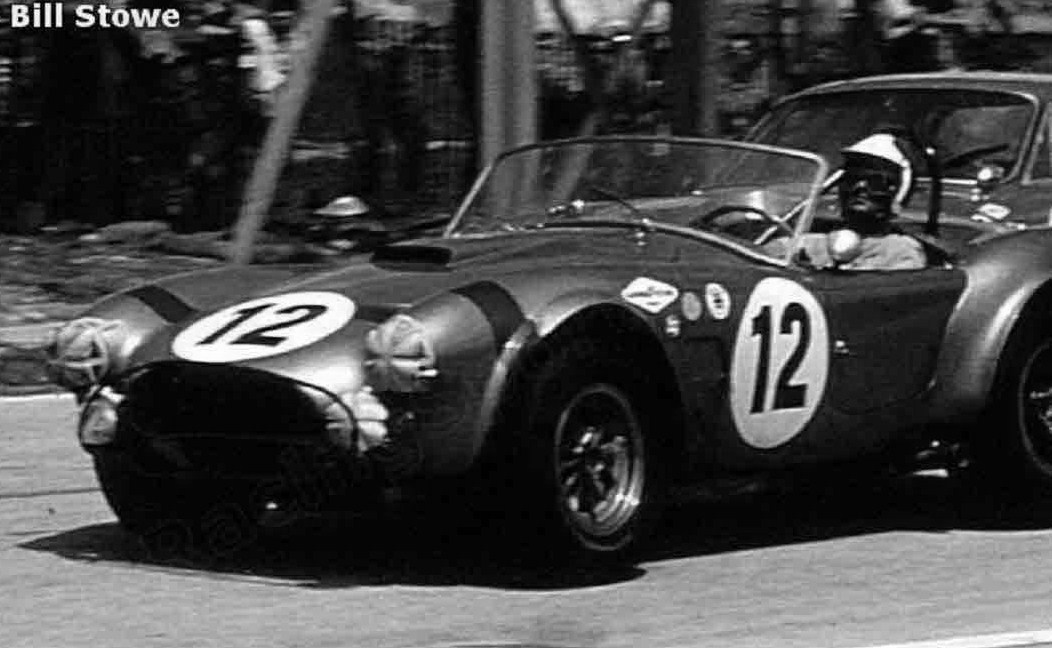 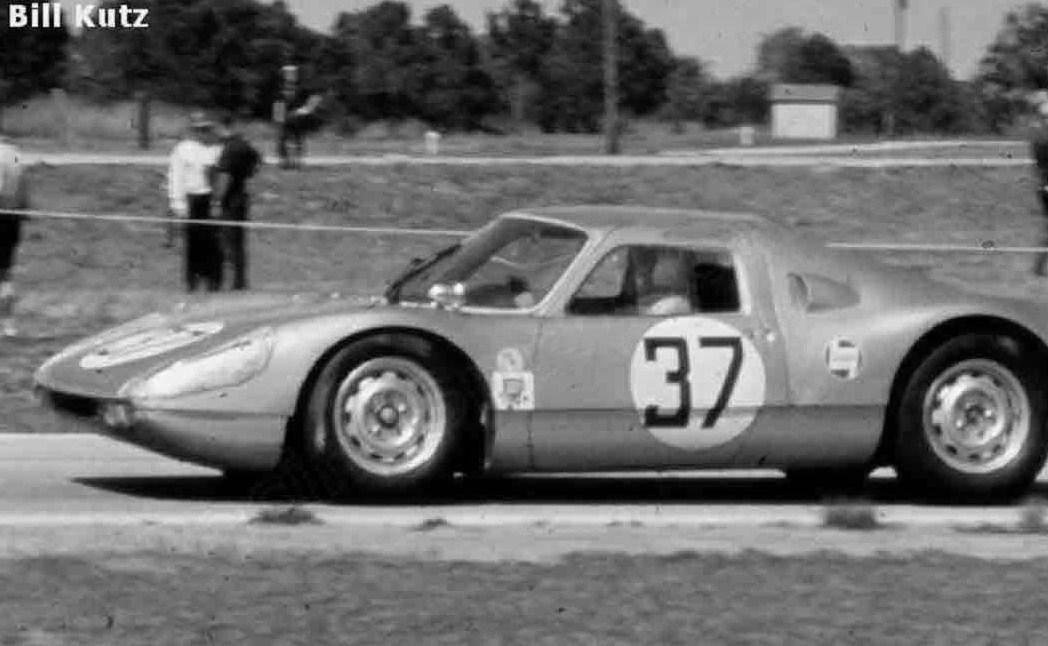 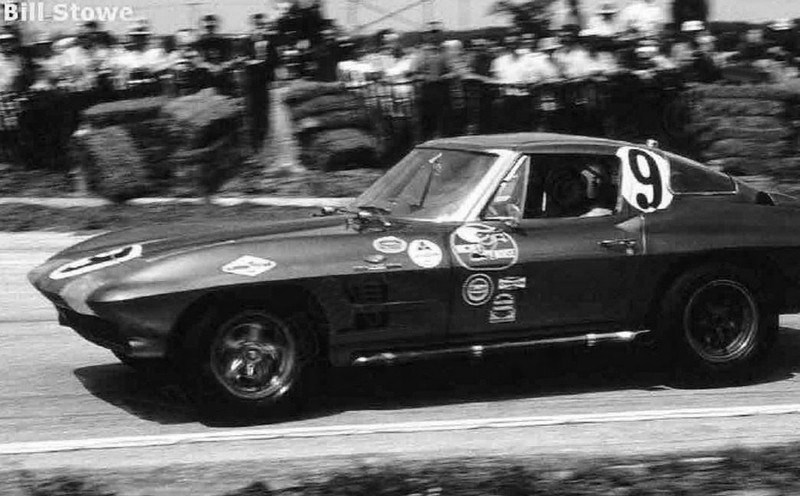 MacDonald with a bit of body roll in CSX2287 as he chases teammate Lew Spencer. [Dave Friedman]

On lap 140 Graham Hill pits his Ferrari 330 Prototype with gearbox troubles. They are done for the day. Photo Dave Friedman

Dave MacDonald blasts through a turn. The Coupe is firmly in 4th OA and still chasing the Ferrari Prototypes. Photo Dave Friedman

MacDonald was a top notch mechanic and always worked on his race cars. This proved valuable to crews as Dave was not only able to
describe whatever problems the car was experiencing but also recommend the exact resolution. Below: Dave debriefs with crew after his
shift.(L-R) Carroll Shelby, Dave MacDonald, Peyton Cramer, Al Dowd and Charlie Agapiou. You can see the rudimentary padding the
crew fashioned to help insulate Dave's leg. Photo Dave Friedman.

Night begins to fall and the drivers will use headlights to guide their way through the rest of the race. Photo Dave Friedman

Dave MacDonald prepares for the final shift and with the Coupe's cockpit hotter than ever the crew discusses various types of hose
insulation applications that would let the hot air escape. Photo Dave Friedman

Lew Spencer enters the pits moments before Holbert and Lew turns his Cobra over to co-pilot Bob Bondurant. MacDonald and Bondurant
talk strategy before both men head out to finish the race in their respective cars. Photo Dave Friedman

Dave MacDonald, with legs padded for insulation, carries the ventilation hose over to be be fitted in CSX2287. Photo Dave Friedman 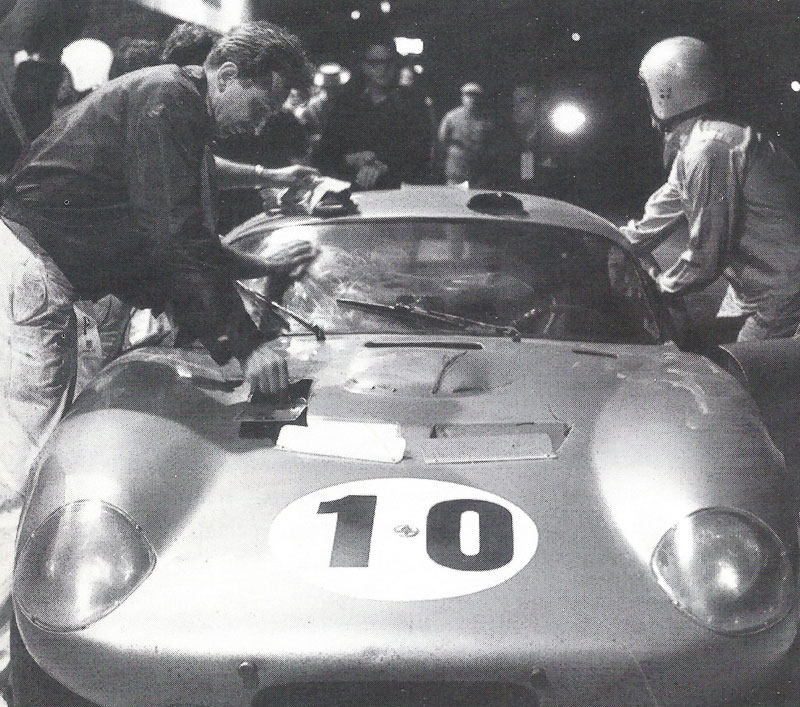 Fuel load is topped off and last minute encouragemnent given to MacDonald. (Photo credit unknown)

With MacDonald buttoned up for the final leg, the Shelby crew sends him out to finish the race. Dave finished strong and when he hit the
12 hour mark the team was credited with with 209 laps completed - putting Dave & Bob 4th OA and 1st GT. This was the highest ever
finish for an American team. Photo Dave Friedman 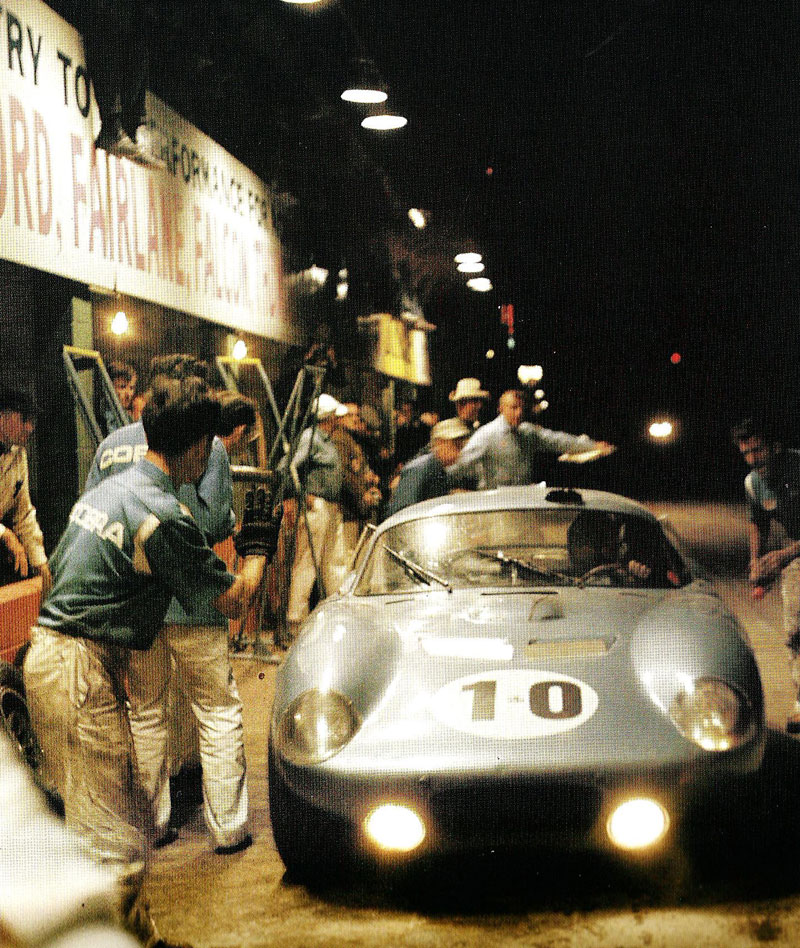 But perhaps the biggest winners were the Americans. Carroll Shelby's Daytona Cobra Coupe, driven by Dave MacDonald & Bob Holbert
finished 1st in the all important GT Class and were awarded 30 valuable points toward the 1964 championship. Since there are no guidelines
or restrictions put on the Prototype class, no points are awarded for the this division. The points launched Shelby's Cobras ahead of Ferrari
and marking the first time ever an American team had lead Ferrari in the race for the world championship. Photo Dave Friedman

This historic victory was also very significant for Dave MacDonald. The win completed the cycle for Dave and he became the man who
drove each of Shelby's legendary Cobra's - The Cobra Roadster 260, Cobra Roadster 289, King Cobra, King Cobra-Lang Cooper &
Cobra Daytona Coupe to their first-ever victories! Photo Dave Friedman 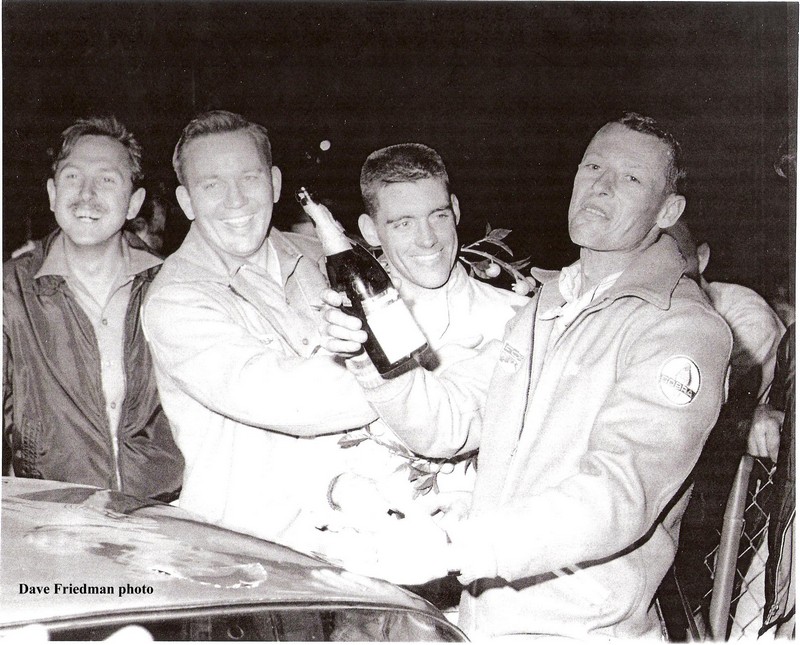 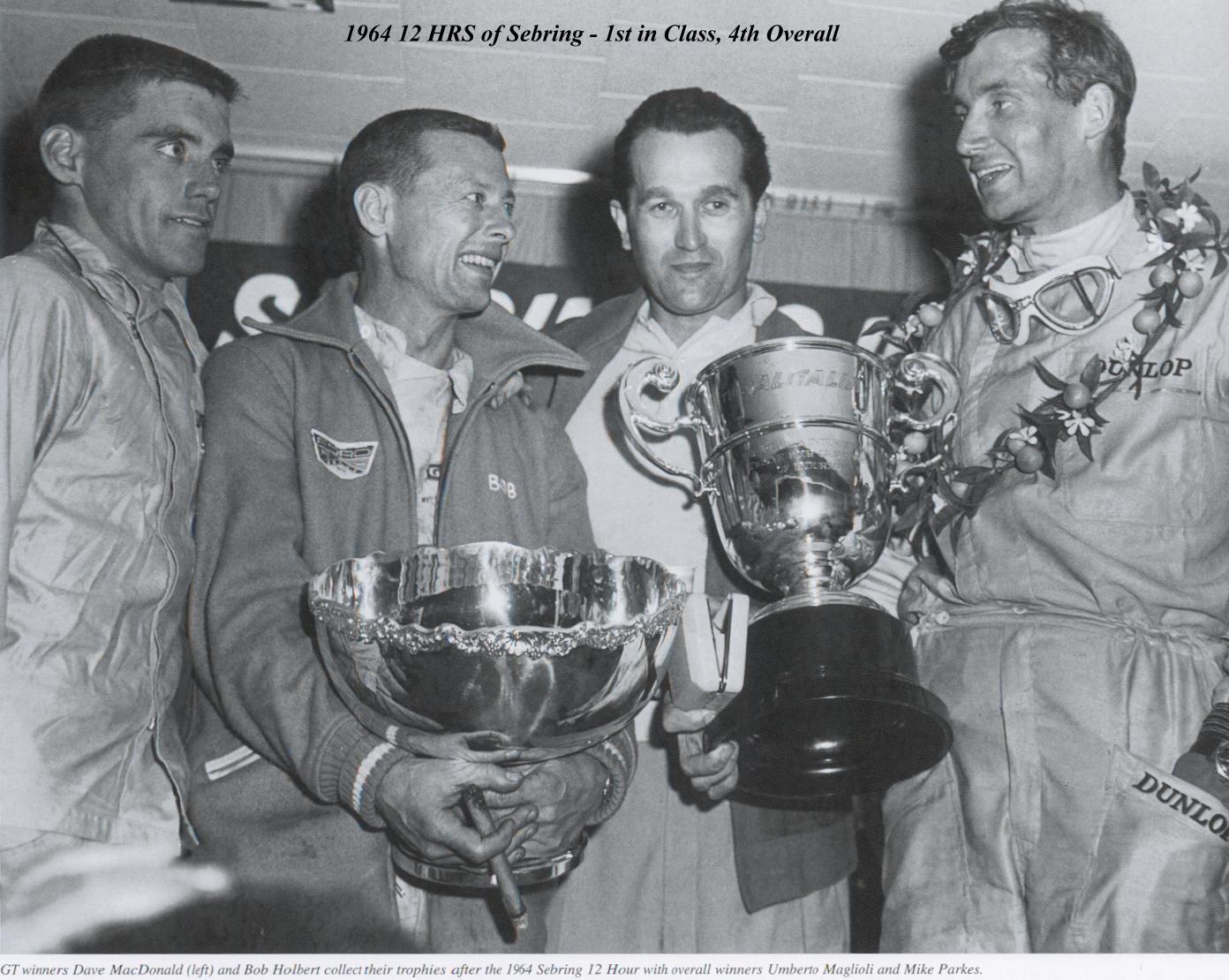 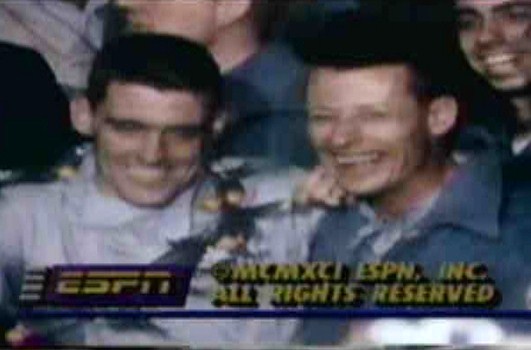 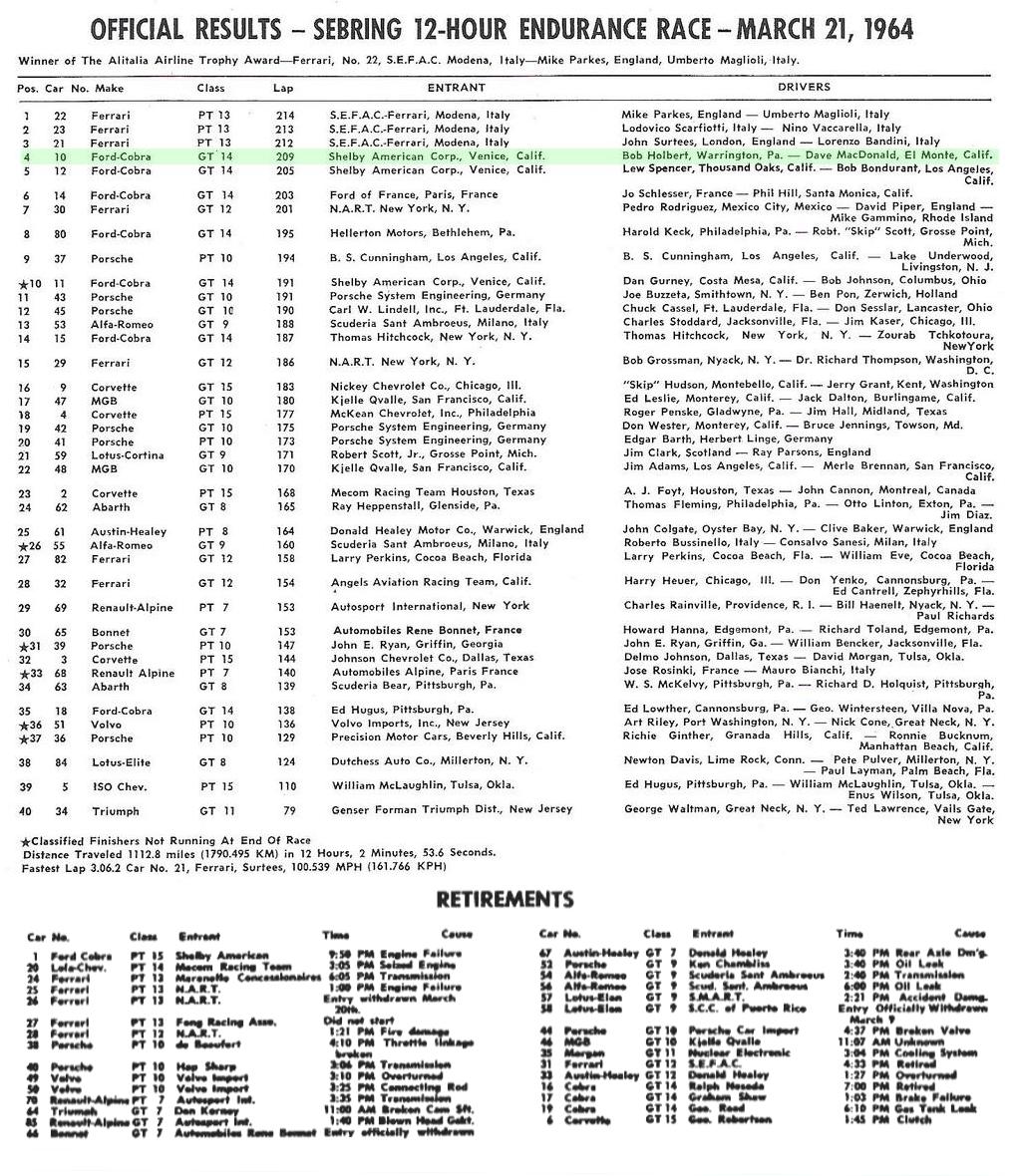 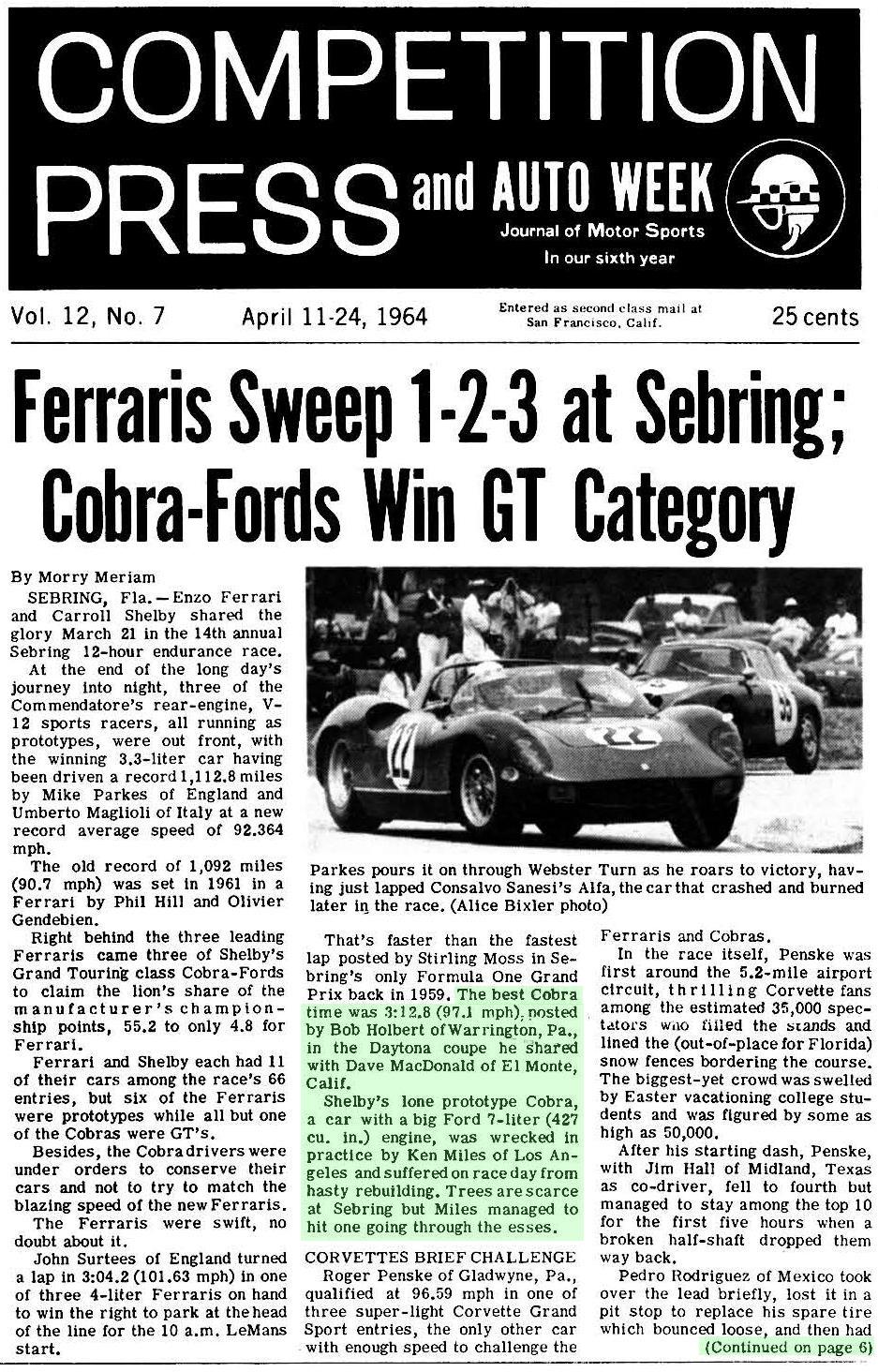 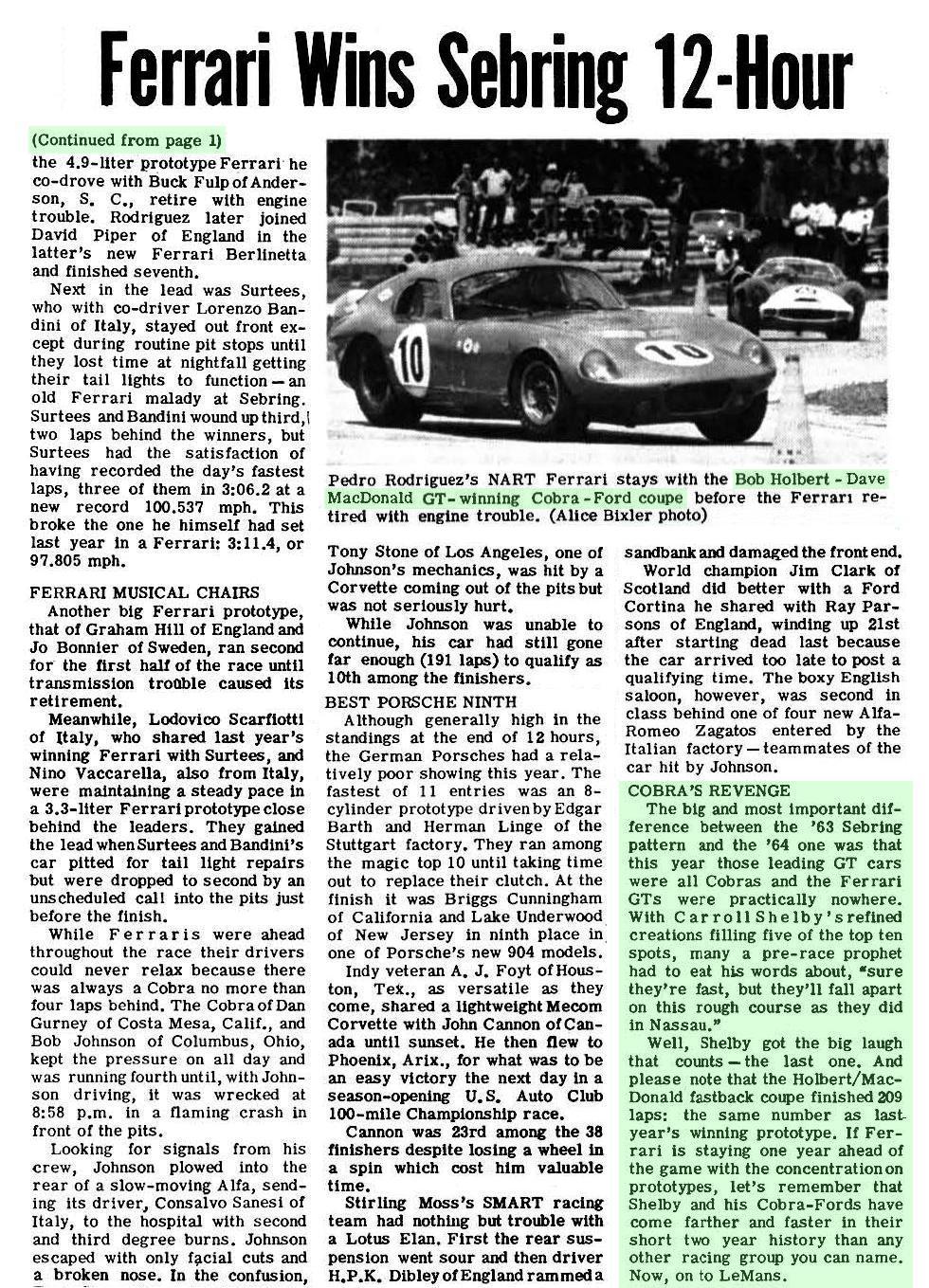 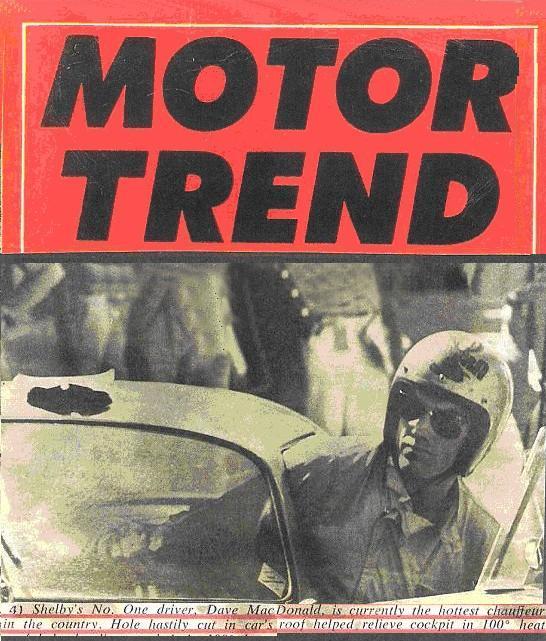 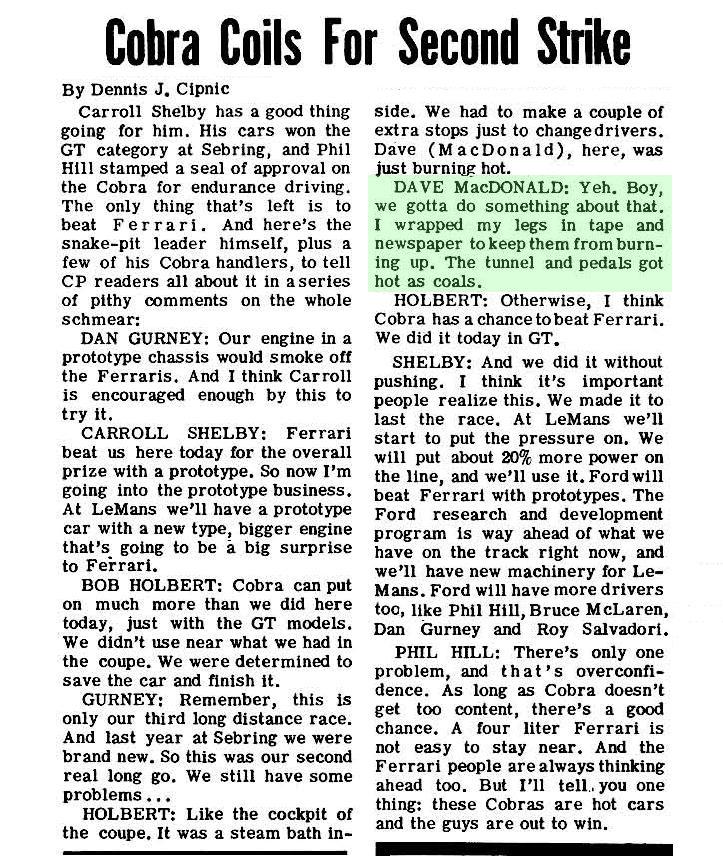 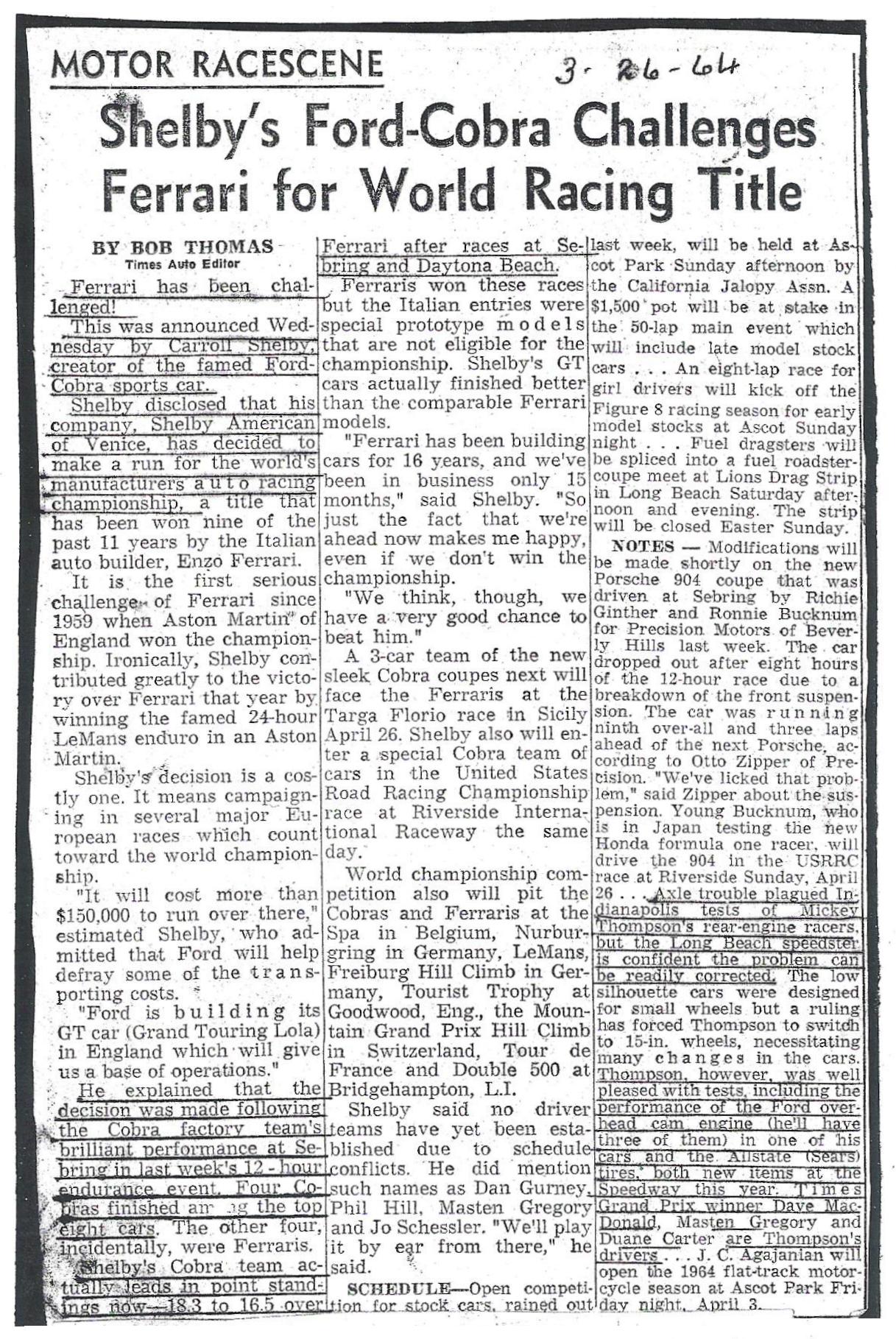 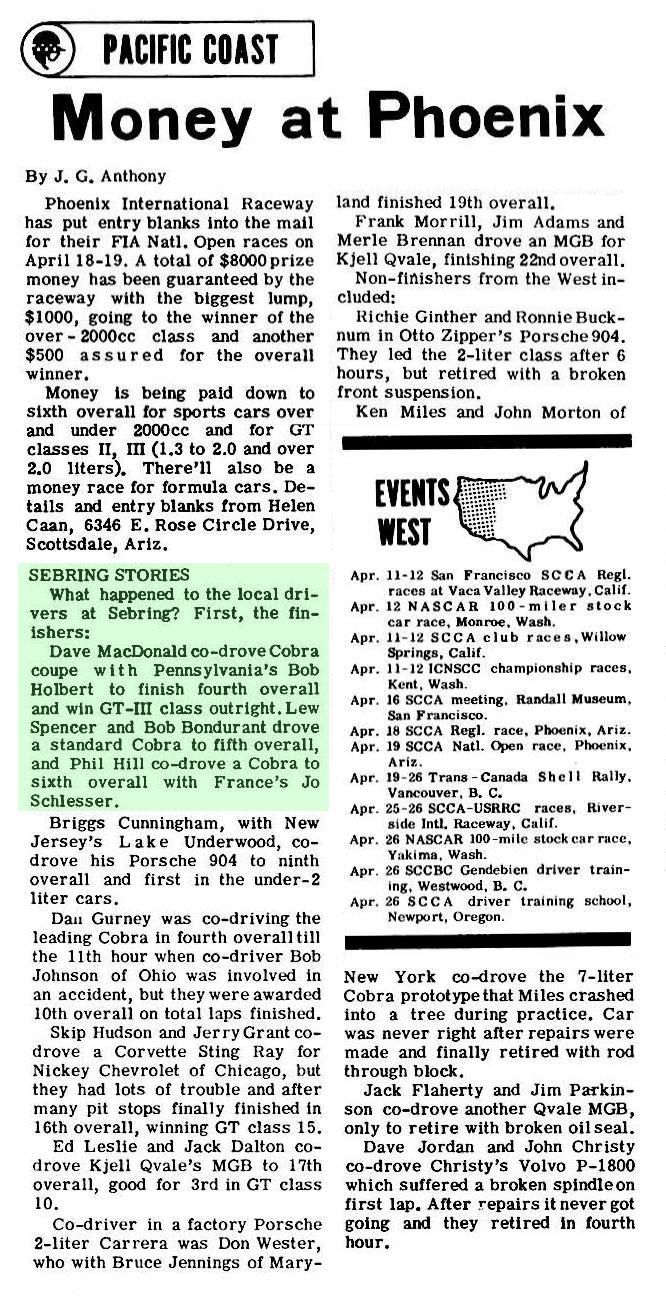 Dave MacDonald's whopping paycheck for winning one of the biggest races in the world - my how things have changed. And what's
with making Dave pay back the bail amount? he was just protecting the race cars. Reimbursement for telephone calls to Augusta GA is
interesting. Dave had just driven King Cobra CM/1/63 to victory at Augusta on March 1st as he outdueled Jim Hall and his high flying
Chaparral. He also finished 2nd in the Augusta GT race later in the day driving a Cobra Roadster. Not sure why he was calling there. Dave MacDonald's 1964 Sebring drivers/pit pass
Back