November 3rd, 1963 NASCAR Golden State 400 at Riverside. Dave MacDonald will pilot the famous Wood Brothers #21 Ford and battle
an elite field of 44 cars and drivers. 7 of the top 10 and 22 of the top 25 point leaders from NASCAR are entered in this west coast showcase.
USRRC & SCCA have a few a top drivers from the sports cars world entered as well. 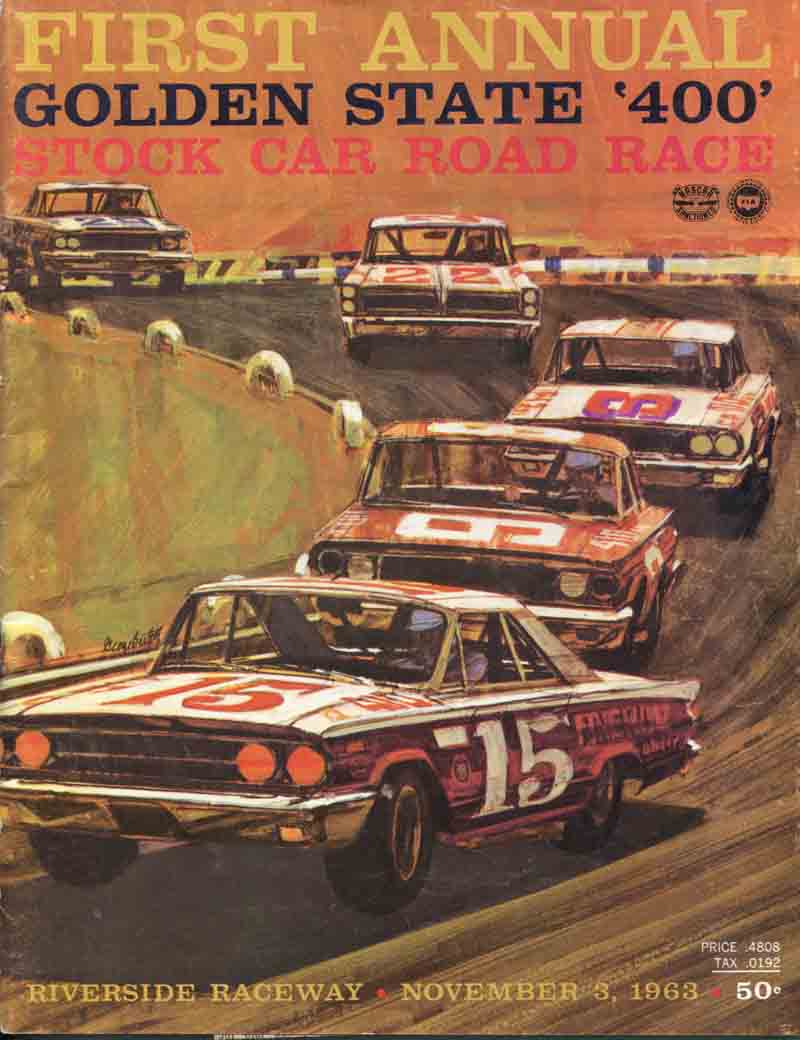 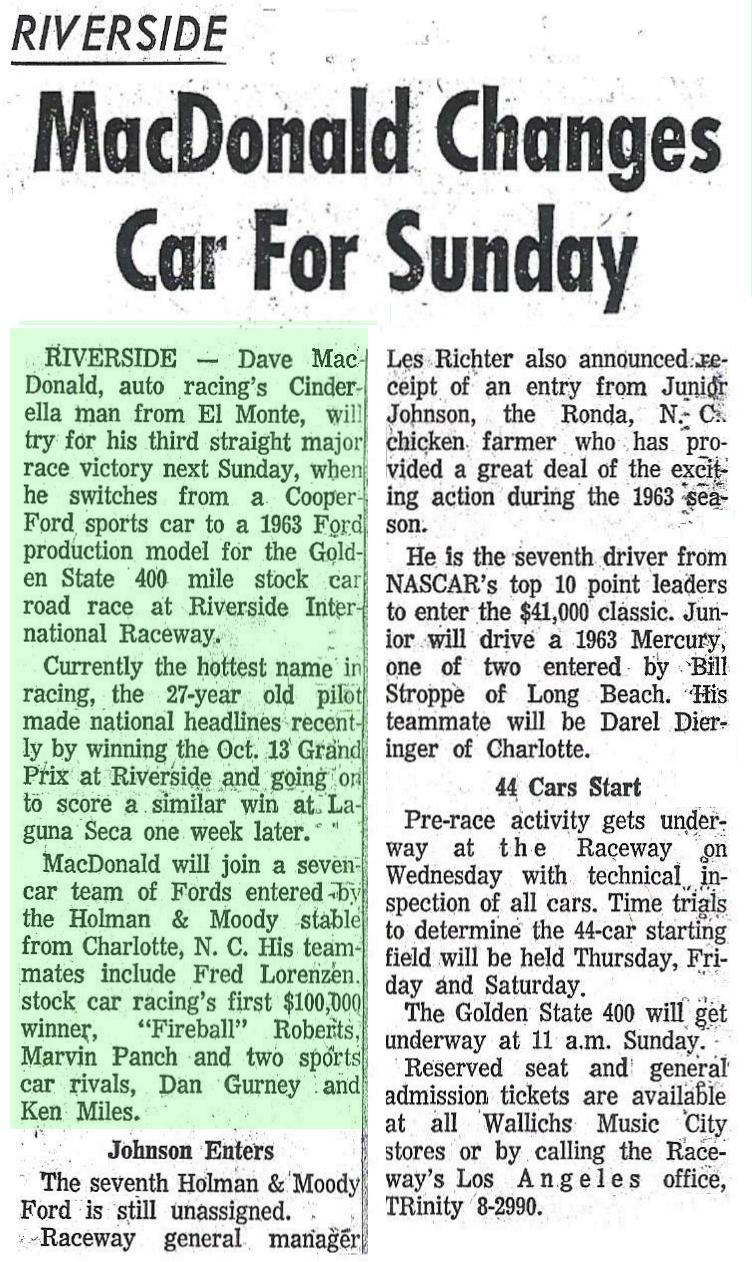 Riverside Raceway track layout for this NASCAR event. The course was changed for NASCAR races by directing the big stockers out of
turn 6 and into a short chute over to turn 8 and then to an elongated back straight. (at the top of this photo). These changes added 1/10 of a
mile to the course for NASCAR races.

Driver qualifying times for the Golden State 400. Note the stars next to Dan, Dave & Marvin. USAC banned their member drivers from
running this race. Some ignored it but Dan Gurney was one who honored the ban and pulled out just before the race. As you see here though
he did qualify the 121 car and put it on the pole, Marvin qualed the 21 and looks as though Dave qualed the Ned Jarrett 11 car. Superstar drivers Dan Gurney, Skip Hudson and Ken Miles discuss USAC ban. With Dan now out he tells Glen & Leonard they need to get
Davey MacDonald to replace him. They called Dave, he ran it by Shelby, Carroll agreed and Dave was in. Marvin then pulled rank and jumped
into the newer (and presumably faster) 121 car, leaving the 21 for Dave. It was Glen himself who taped over Pancho and hand painted DAVE
on the door. The crew then had to adjust Marvin’s seat setup because Dan was so tall & long. Marvin's old seat setup in the 21 wasn't
ideal for Dave but he told Glen not to worry about it, lets just go racing. Photo Dave Friedman and The Henry Ford. Race day and the Goodyear blimp on hand to televise the race to a national audience. Photo The Henry Ford. Damage to Ken Miles' car still evident after Ken rolled it in practice days earlier. (Ken by front tire). Photo Dave Friedman Holman Moody crew still working on Ken's car right up to race time. Photo Dave Friedman and The Henry Ford. Drivers huddle hours before the race and NASCAR officials lay down the rules of the road. Photo The Henry Ford. Dave MacDonald listening intently in 2nd row, far right. Photo The Henry Ford. The crowd begins to fill the turn 6 grandstands in anticipation of watching the country's elite NASCAR drivers test their skills on the west
coast road course. Photo The Henry Ford. NASCAR stockers line the grid just before race time Pace car and trophy queen positioned in front of the field and ready to start the race. Photo The Henry Ford.

Pole sitter Marvin Panch in the Wood Bros #121 Ford and Fireball Roberts (#22) lead a stellar NASCAR field out of the grid area and onto
the track for the pace lap and a rolling start. Photo Dave Friedman

Pace car enters the pits and the starter drops the flag - the race goes green! #121 Marvin Panch on the pole with Fireball Roberts, Freddy
Lorenzen & Dave MacDonald occupying the outside of rows 1-2-3. Photo Dave Friedman

As the field comes off the back straight into the renumbered turn 8 it's legendary NASCAR pilots Panch, Roberts and Lorenzen running
1-2-3. Photo The Henry Ford. Coming round to start lap 2 you can see Fred Lorenzen has jumped Fireball Roberts and now runs 2nd behind Panch. (The Henry Ford)

Trouble on lap 2 as Rex White smacks the hill in turn 4. It's not easy driving a heavy stocker at Riverside. White spun off the track so no
yellow was required. MacDonald started 6th and is now 4th and moving on the leaders. Photo courtesy of Cars magazine 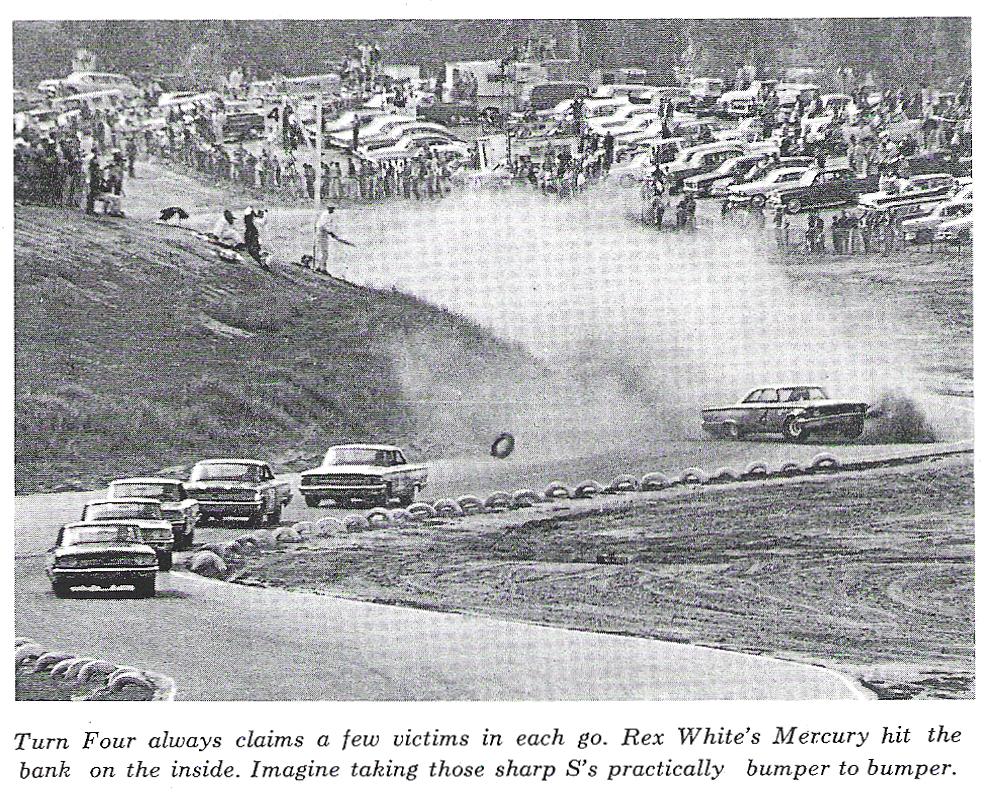 Lap 4 and King Richard Petty (#43) goes through turn 1 behind Joe Weatherly, alongside Ken Miles and in front of David Pearson. Racing
legends were everywhere in this Riverside race. Photo The Henry Ford

Dave MacDonald & Freddy Lorenzen battled for the next 20 laps and while Dave got by him a couple times, like here going into turn 8,
Lorenzen would repass him before laps end and be recorded as race leader for laps 2 thru 21. Photo Dave Friedman

Lap 22 and Dave MacDonald blows past Fred Lorenzen on the back straight and leads Fred and lap a lagging Dick Mitchell into turn 8.
MacDonald officially becomes lap leader as the cross the finish line. Dave Friedman photo

Legendary Shelby Cobra Daytona Coupe designer Peter Brock was also a fine racer. Here Pete powers his Kraco stocker out of renumbered
turn 7 (normally 8) and onto the back straight. Photo The Henry Ford

Lap 23 and MacDonald laps a struggling Billy Wade who retired with transmission problems before finishing the lap. Photo Dave Friedman

Part of the 1963 Golden State 400 field going thru tun 1. Photo Dave Friedman and The Henry Ford.

Dave MacDonald coming off Riverside's back straight and into turn 9 and still race leader.

Transmission problems put Freddy Lorenzen out on lap 26 as he limps around the track on his final tour. Photo Dave Friedman.

Lap 38 and while Bob Bondurant is running a good race he's no match for Fireball Roberts on this day and Roberts runs up to lap him. NASCAR legends Junior Johnson and David Pearson come out of turn 6 both running in the top 10. Photo The Henry Ford Dave MacDonald far ahead of the field and making it look easy. You can see where the Wood team taped Dave's name over Pancho's.

Bob Bondurant (R) climbs out of his car after he and Paul Goldsmith ram the turn 6 guardrail on lap 44. Photo The Henry Ford

Midway through the race MacDonald has powered the Wood Bros #21 Ford to a huge lead over 2nd place Darel Dieringer's '63 Merc. Here
Dave comes out of turn 7 onto the back straight ahead of NASCAR legend Joe Weatherly in car #8. Photo The Henry Ford

65 laps in the books and Darel Dieringer still running in 2nd but a half lap behind Dave MacDonald. Photo Fran Hernandez

On the next lap Dave MacDonald goes by Junior Johnson and puts a lap on him and Marvin Porter (77). Photo Dave Friedman 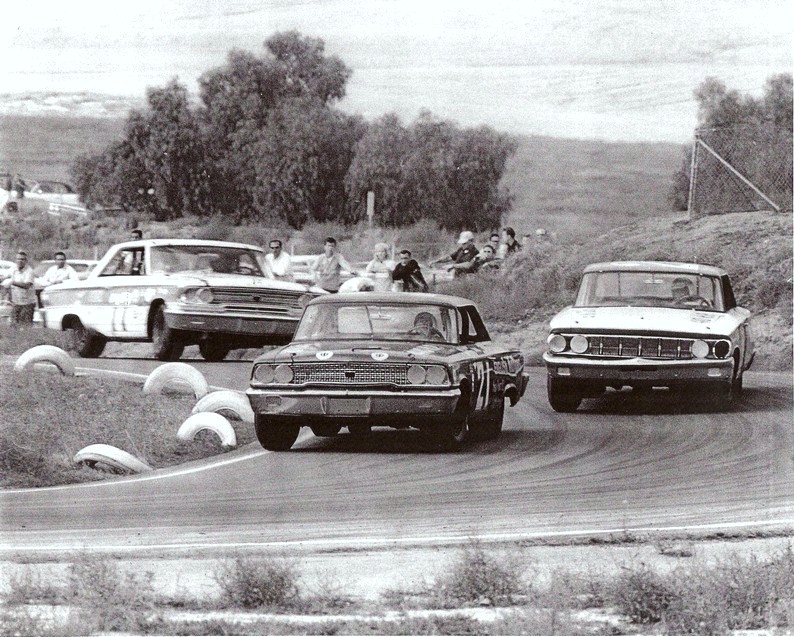 On lap 91 MacDonald's car loses 3rd gear, the car's highest, and the Wood team prepares for a pit stop. Photo The Henry Ford 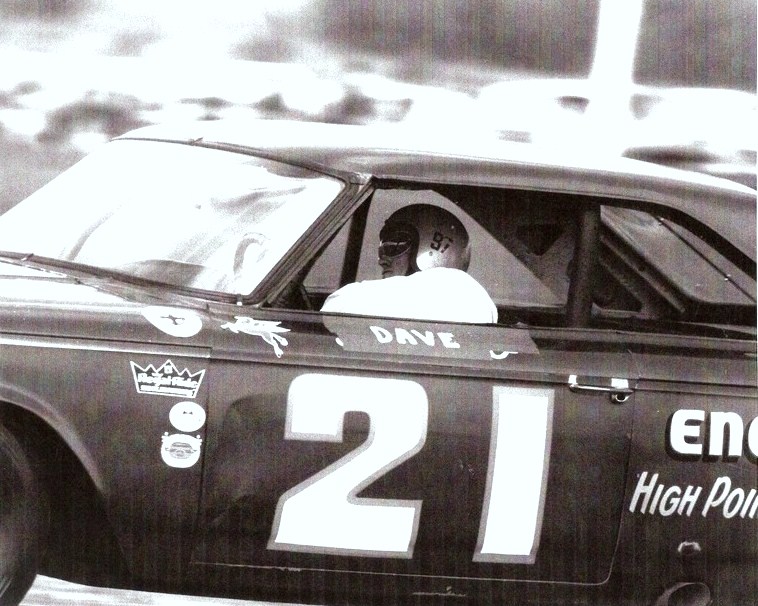 Media perch high above the redesignated turn 7 catches the big stockers linking to the back straight. Photo The Henry Ford

Fireball Roberts still running in the top five late in the race. Photo The Henry Ford

100 lap mark and Dave still leads but is struggling to keep his wounded Ford Galaxie ahead of Dieringer. Photo Dave Friedman

On lap 105 despite running with only 1st & 2nd gears Dave MacDonald takes 9th place drive Jack Smith on the long back straight and puts
him another lap back. Dave Friedman photo

Lap 110 and Dave MacDonald goes through turn 6 hard on the wheel with one hand and the other on the gear lever as he fights to keep his
car from popping out of gear. Photo The Henry Ford Lap 114 MacDonald blasting past Lloyd Dane (#44) and Bill Amick (62) on Riverside's back straight but hard charging Darel Dieringer
has pulled to within a second of MacDonald. Photo The Henry Ford Holman Moody crew signals for Fireball to pit. Photo Dave Friedman and The Henry Ford

Dieringer ultimately catches and passes MacDonald on lap 115. The two racers would battle mightily and exchange the lead several times
over the next few laps before Darel went by Dave for good on lap 119. Photo The Henry Ford 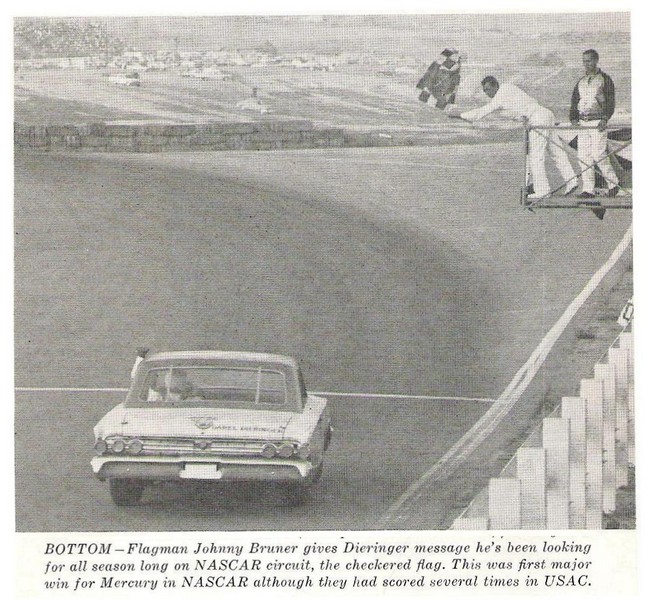 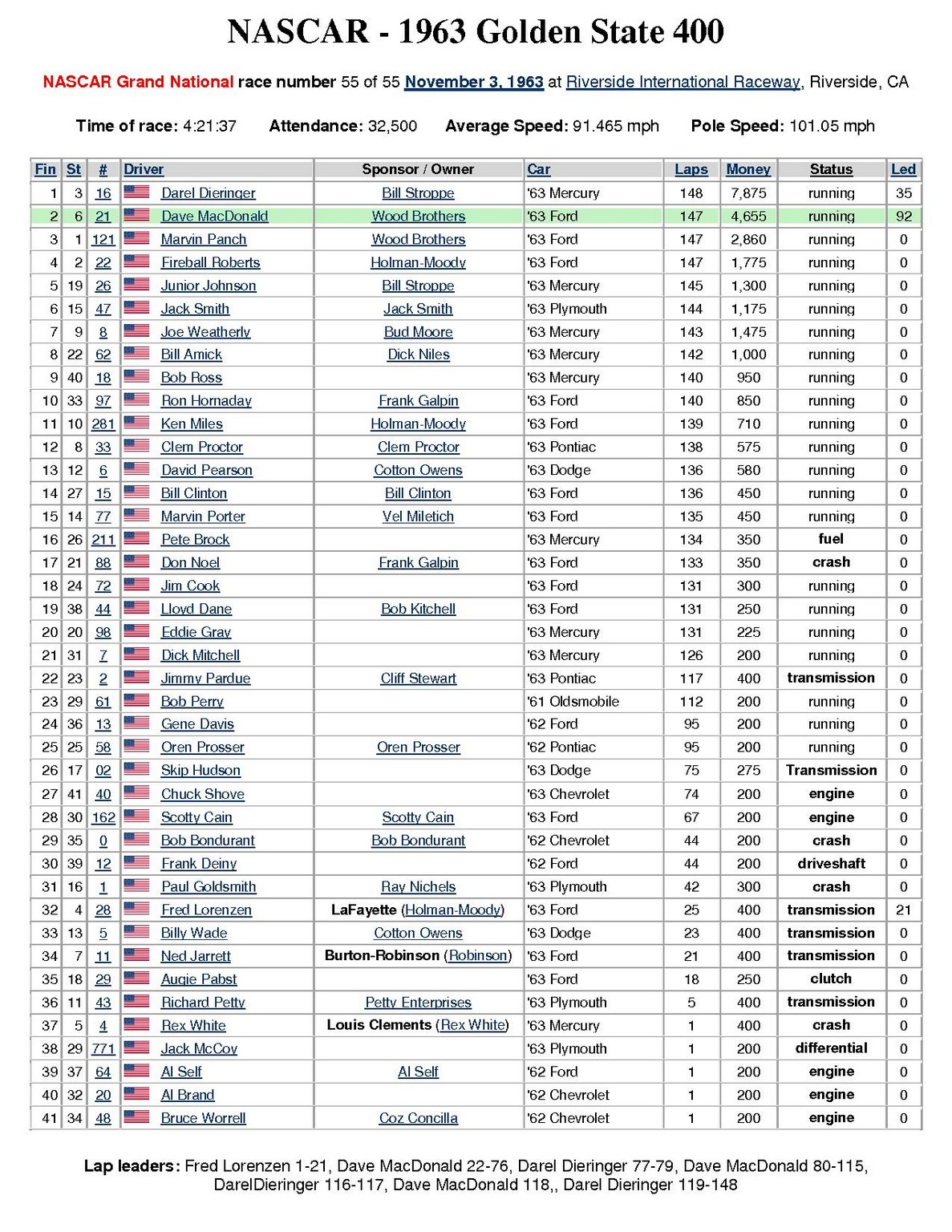 After a grueling 4 1/2 hours of NASCAR road racing, Dave finishes 2nd and gets a well deserved congratulatory hug from daughter Vicki. 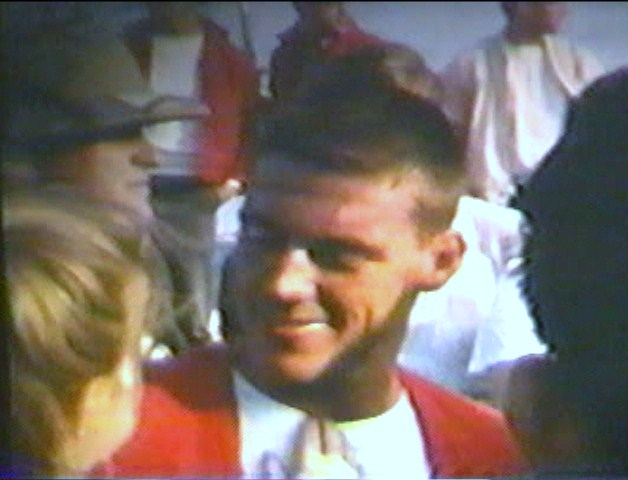 Dave debriefs with the Wood team. Glen Wood later praised Dave for his 2nd place finish despite racing the final 50 laps in only two gears. 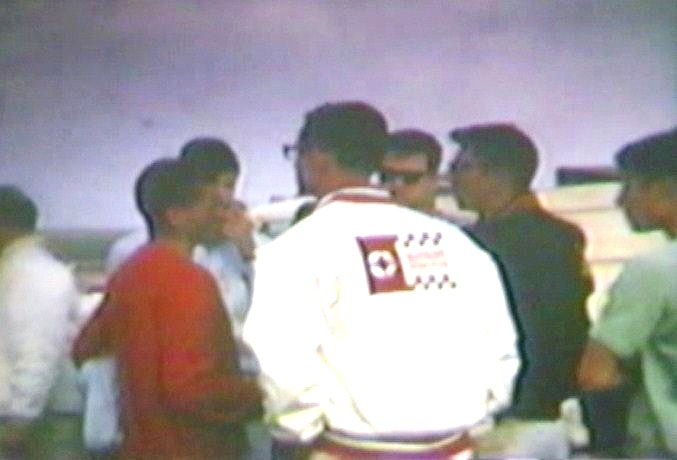 News and magazine articles recapping the 1963 NASCAR Golden State 400. Video of the race is in Dave's Racing Videos section 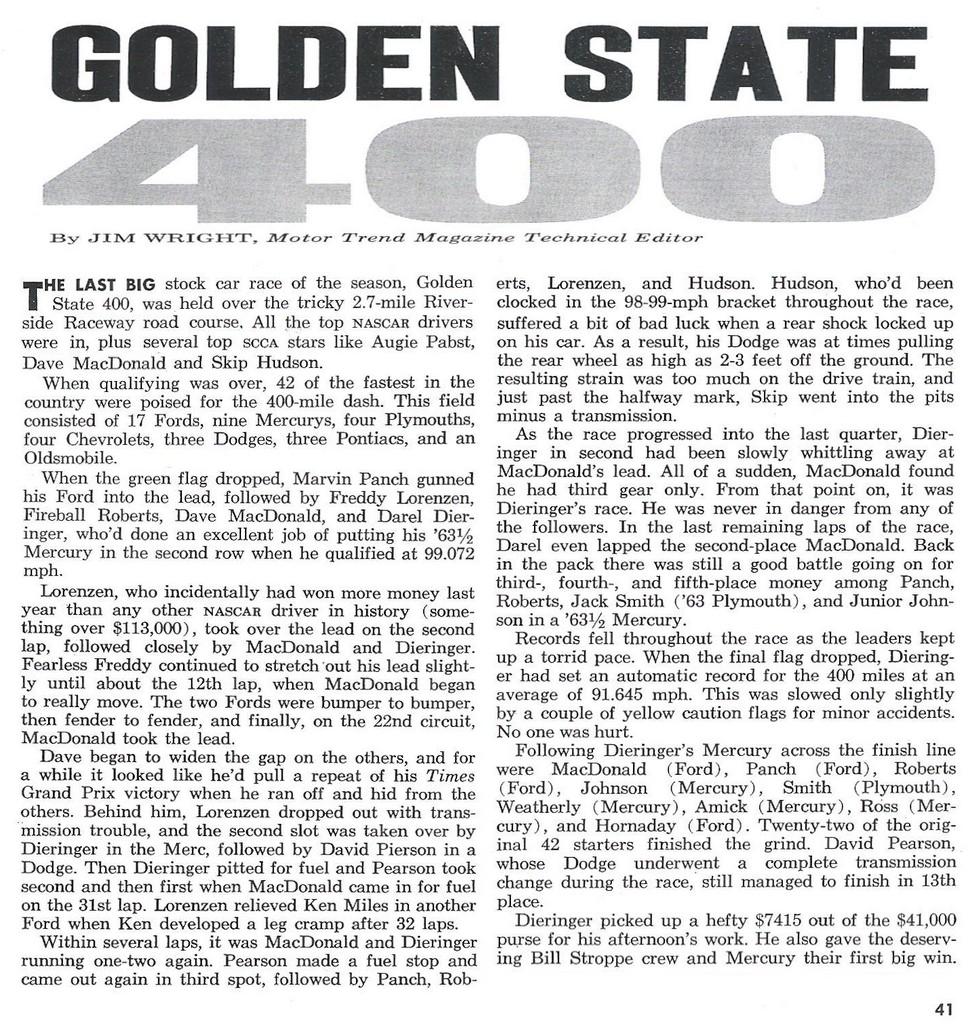 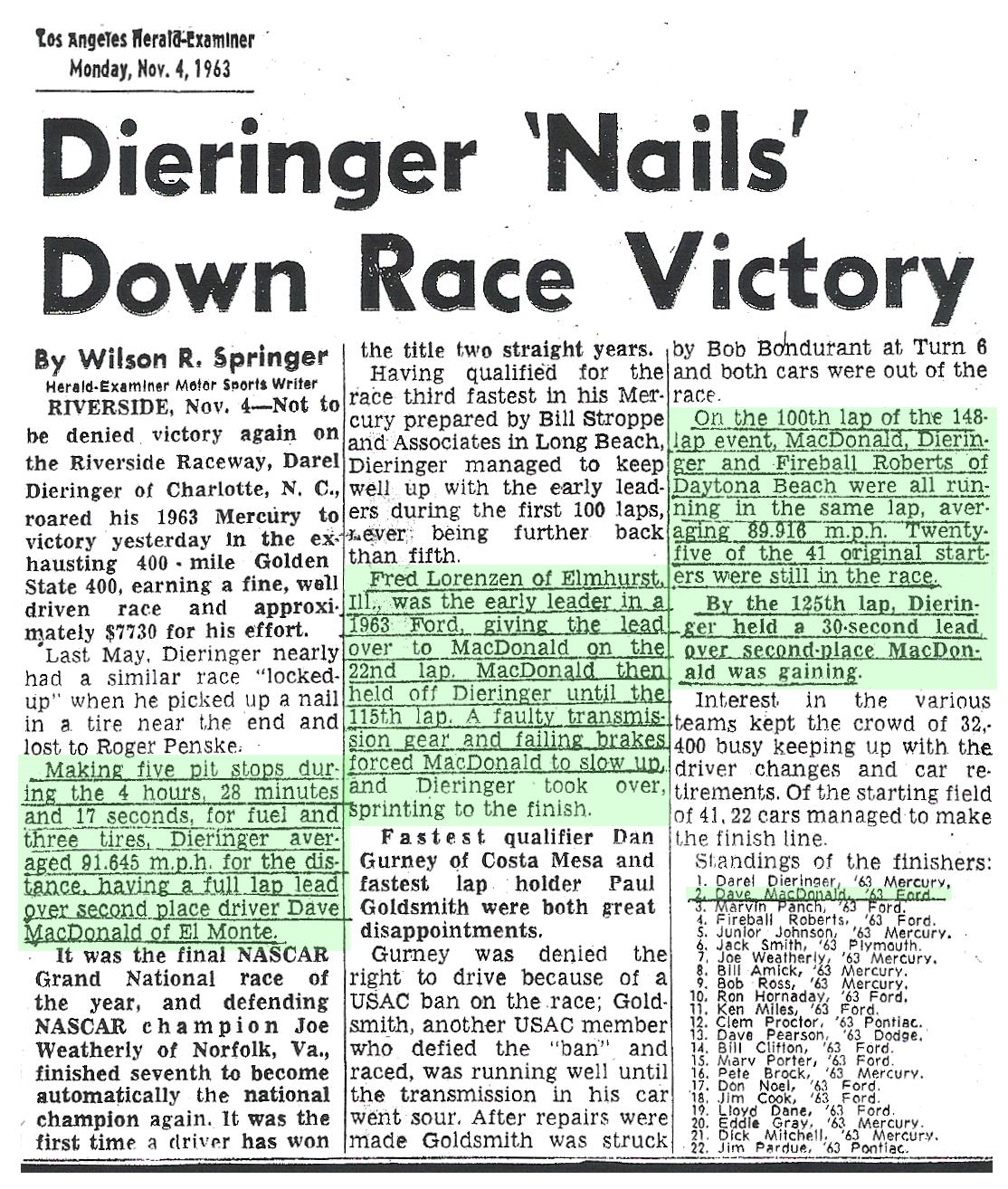 Part of Dave's winnings from the 1963 NASCAR Golden State 400 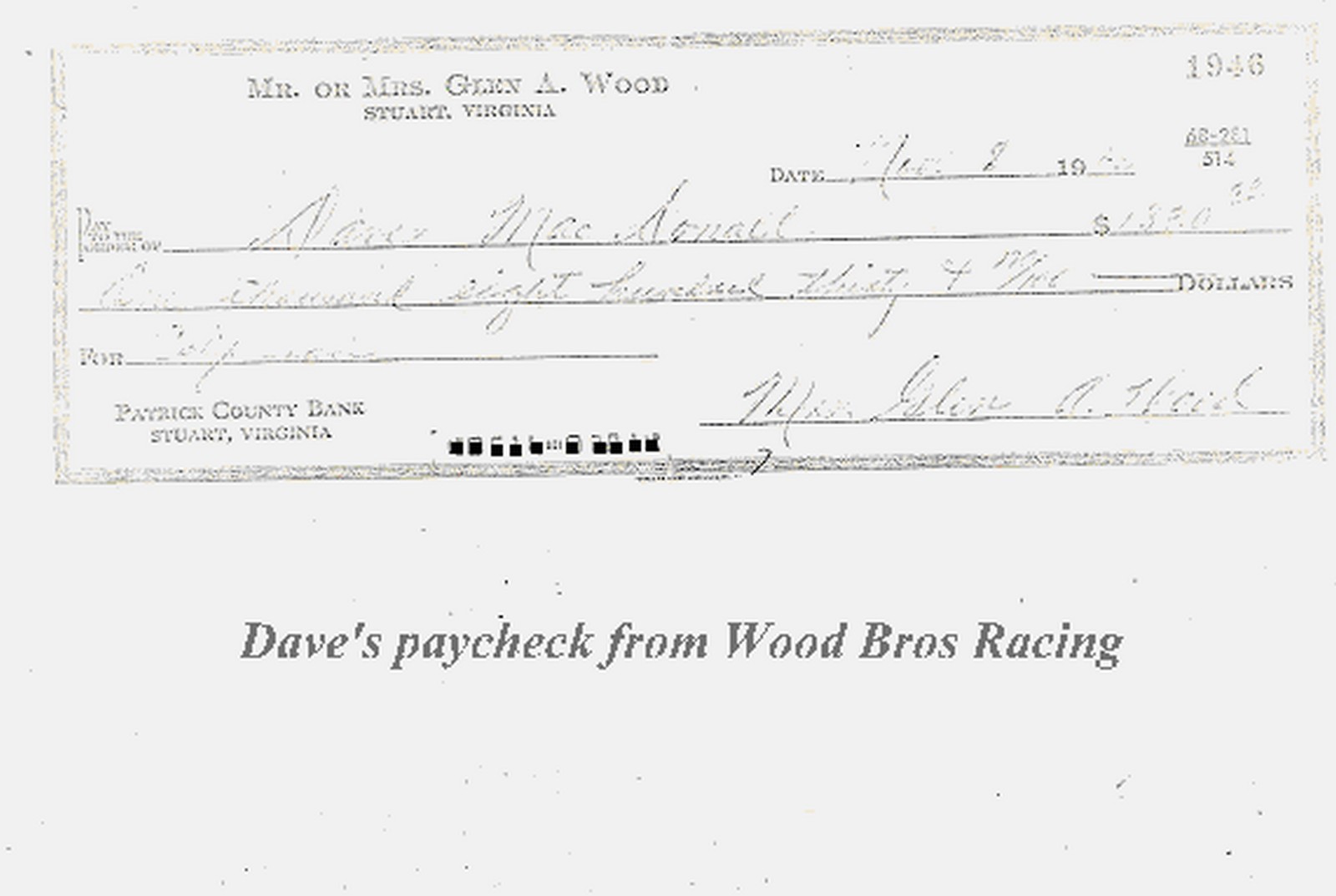 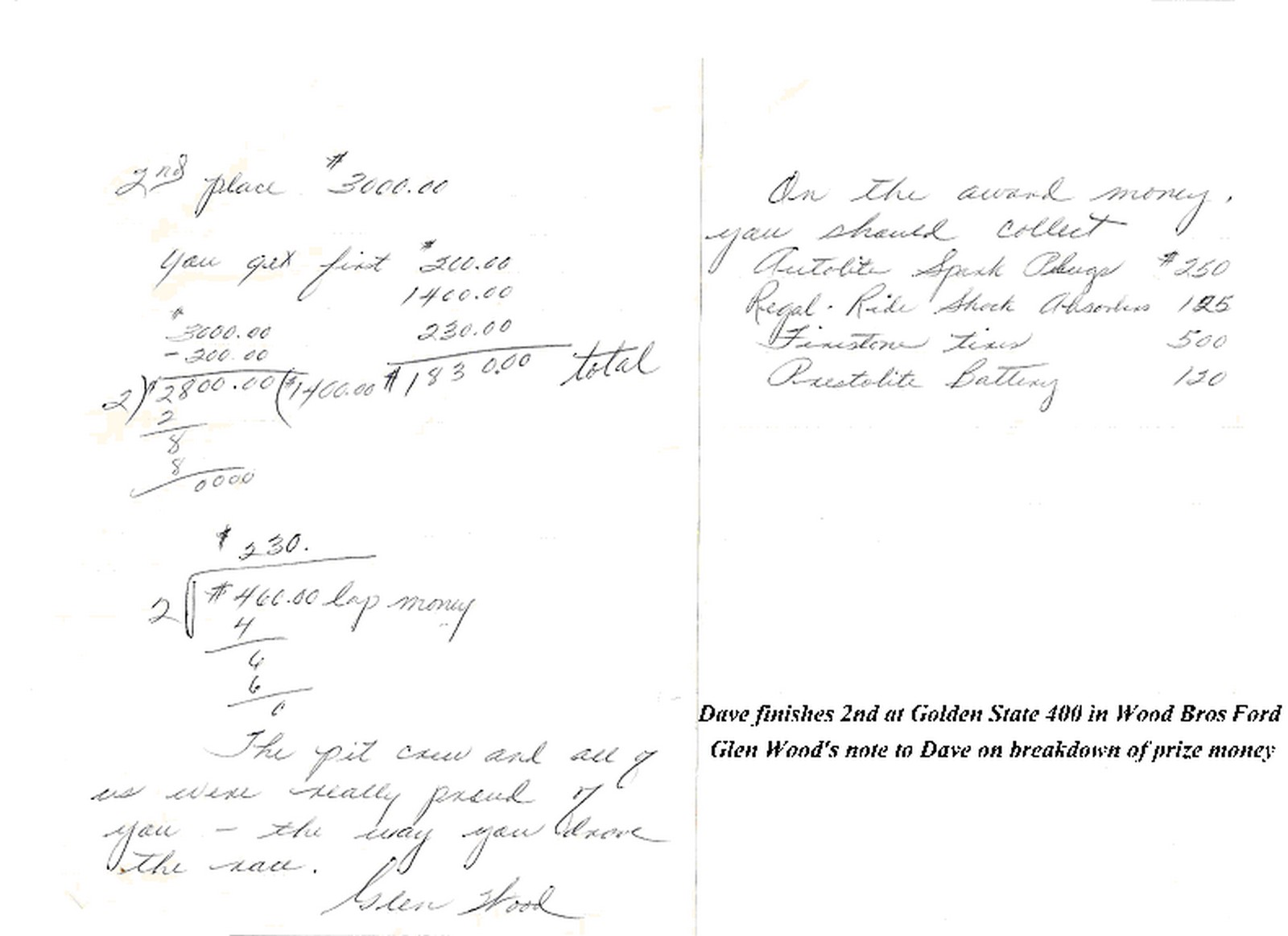 Looks like NASCAR also paid Dave for his 2nd place finish. 2nd place prize money (excluding sponsor money) was $4,655, this check from
NASCAR is $2,362.50 - so just about half went to him (I guess) 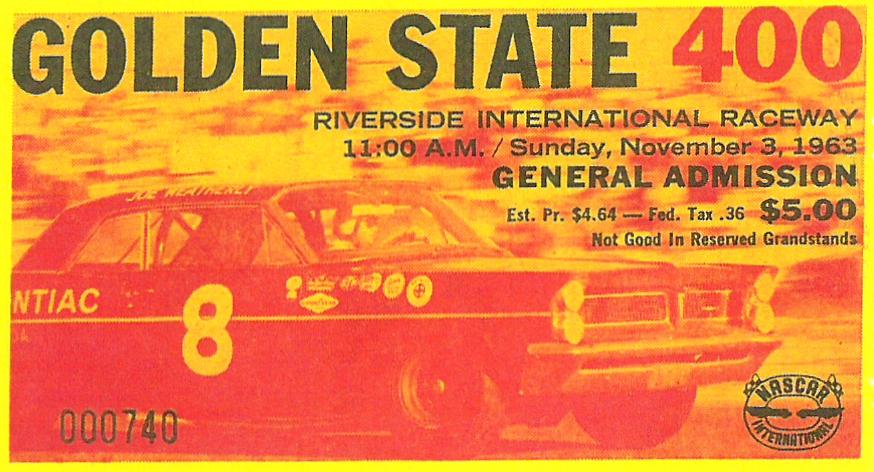